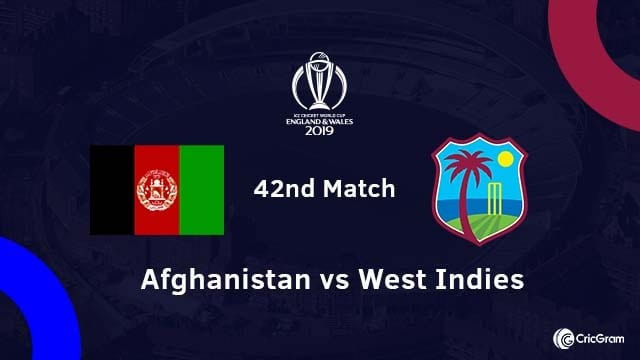 Afghanistan and West Indies will face-off in the 42nd match of World Cup’19 at Headingley in Leeds. We will provide AFGH vs WI Dream11 Team Prediction, Preview and Probable Playing XI for the match.

Team Afghanistan lost all eight of their encounters in World Cup’19 and are on the bottom of the points table. However, They have shown good competitive spirit against top sides. Gulbadin Naib, Mohammad Nabi, Hasmatullah Shahidi, Najibullah Zadran and Rahmat Shah have performed consistently for the team. They will be eager to put a spirited performance in their last encounter of WC’19 against West Indies team and end the campaign on a good note.

In the last match, They lost to Pakistan by 3 wickets in a close encounter. Batting first, Rahmat Shah gave a good start to the team scoring crucial 35 runs while Asghar Afghan and Najibullah Zadran scored 42 runs each to take the team to a total of 227. In defense, Spin trio of Mujeeb-Rashid-Nabi bowled brilliantly taking five wickets between them to put Pakistan in a tough position but ultimately failed to defend the target and lost by 3 wickets.

West Indies have many memorable moments in WC’19 but have failed to win matches and are ninth on the points table with one win and six losses. Injury to Andre Russell and Evin Lewis further impacted their team combination. The onus will be on Chris Gayle, Pooran, Hetmyer, Holder, Brathwaite, and Cottrell to lead the team from the front and defeat confident Afghanistan team. They will be eager to put a good performance in their last encounter of WC’19.

In the last encounter, They lost to Sri Lanka by 23 runs. Bowling first, Skipper Jason Holder took two scalps in an otherwise poor bowling effort to restrict Sri Lanka at 338. In the chase, Chris Gayle and Hetmyer failed after getting starts but Nicholas Pooran played brilliant knock of 118 runs and was supported by Fabian Allen who scored crucial 51-run knock but was ultimately left behind by 23 runs.

Pitch will be neutral and provide assistance to pacers in initial overs and then support batsmen. Spinners can also find some support in second innings.

Aftab Alam is ruled out of WC’19 under exceptional circumstances and Sayed Shirzad has been announced as the replacement. Hamid Hassan will also not play tomorrow as he played his last international match against Pakistan.

M Nabi, Gulbadin Naib, and Samiullah Shenwari will play the role of an allrounder. Rashid Khan can also contribute with the bat.

Dawlat Zadran/Sayed Shirzad will lead the pace attack along with Gulbadin Naib. Rashid Khan, M Nabi, and Mujeeb will be the key spinners. Rahmat Shah and Samiullah Shenwari can also bowl a few overs of spin.

Evin Lewis if fit can replace Sunil Ambris while Kemar Roach is likely to replace underperforming Shannon Gabriel in the playing XI.

Chris Gayle and Sunil Ambris can open the innings. Shai Hope, Nicholas Pooran and S Hetmyer will follow them.

Jason Holder and Carlos Brathwaite will play the role of allrounder along with Fabian Allen.

Jason Holder, Kemar Roach, Oshane Thomas, and Sheldon Cottrell will lead the pace attack of the team along with Carlos Brathwaite. Fabian Allen will lead the spin attack. Chris Gayle can support him.

Darren Bravo can also get a chance in place of Sunil Ambris. Chances of same are less.

Shai Hope has performed exceedingly well for West Indies and is the leading run-getter in ODI from past one year. He has scored 11, 68, 11, 96, 1, 5 and 5 in seven matches of WC’19 and has not performed as per expectations.

Nicholas Pooran is a very destructive batsman and has performed well for Windies till now in WC’19. He has scored 309 runs in seven matches at an attacking strike rate including 118 runs against Sri Lanka in the last encounter.

Ikram Ali Khil has been added as a replacement for injured Mohammad Shahzad and has not performed well for Afghanistan till now in any format and will play the role of specialist wicket-keeper only.

Rahmat Shah is the most consistent batsmen for Afghanistan and can also bowl a few overs. He has scores of 43, 2, 0, 6, 46, 36, 24 and 35 in eight encounters and will be eager to score big in the last encounter.

Shimron Hetmyer is very attacking batsmen and can play big innings on flat tracks of England. He scored 39, 50, 54, 18 and 29 runs in the last five encounters.

Hasmatullah Shahidi has performed consistently for Afghanistan from past one year. He scored crucial 59 and 76 in two encounters but plays at very slow strike rate.

Ex-captain of Afghanistan Asghar Afghan played attacking 44 and 42 run knock against England and Pakistan respectively and can be a good pick in WI vs AFG Dream11 team.

Najibullah Zadran is an attacking batsman and scored stroke-filled 51 and 43 in the first two matches but failed in subsequent matches. He also scored 42 runs against Pakistan in the last encounter.

Sunil Ambris has been added as a replacement for Andre Russell. He is in good form recently and scored 30 and 5 runs in two matches.

Evin Lewis is an attacking opener and played a good knock of 70 runs against Bangladesh. He is injured and can be risky tomorrow.

Hazratullah Zazai is a very attacking batsman and can score at a very quick rate. However, His consistency is a question but will be eager to give a good start to his team. He has scores of 0, 30, 34, 22 and 10 in five matches. He is unlikely to play tomorrow.

Skipper Gulbadin Naib has performed well with the bat as well as the ball. He has scored 189 runs and has taken nine wickets till now. He will open the innings for Afghanistan.

Jason Holder has performed well with the bat as well as the ball in recent times and will be crucial for West Indies. He has taken eight scalps in six matches and has also scored 125 runs.

M Nabi is the star allrounder of Afghanistan and will be key with the bat as well as the ball. He can be lethal with the ball against left-handed batsmen. He took brilliant four-wicket haul against Sri Lanka and took two scalps against Pakistan. And he also scored crucial fifty against India.

Carlos Brathwaite can play quick cameos if required and can also chip in with wickets in death overs. He took three and two wickets against Australia and New Zealand respectively. He scored attacking 101 runs against New Zealand.

Samiullah Shenwari is an experienced all-rounder. He scored 49* and 19* in last two matches. He can also bowl few overs of spin.

Fabian Allen is an attacking batsman and handy part-time spinner. He scored 51 runs from 32 balls against Sri Lanka.

Sheldon Cottrell has been excellent with the new ball and is taking early scalps for his team. He is also taking scalps in death overs. He has taken ten scalps in seven encounters.

Rashid Khan is a majestic spinner and can destroy any batting line-up of the world. He can also hit big sixes. He has taken only five wickets till now and is not in a good form.

Mujeeb is a quality spinner and bowls majority of his overs in the initial stage. His recent form is poor but bowled economically in last four matches and took three and two scalps against Bangladesh and Pakistan respectively.

Oshane Thomas is bowling at a quick pace and generates bounce from the pitch. He has taken eight wickets in seven matches including four wicket-haul against Pakistan in the first encounter but failed in the remaining matches.

Kemar Roach can destroy any batting attack if pitch suits him. Overcast conditions can further favor him. He took three crucial scalps against India. He can play tomorrow.

Right-arm pacer Dawlat Zadran took three scalps against England and can also be handy with the bat. He is likely to play tomorrow.

If you liked West Indies vs Afghanistan Dream11 Prediction, Then follow us on Telegram for Dream11 Team and Fantasy Cricket Tips. You can also find us on Twitter. What are your Captain and Vice-captain choice of Dream11 Team? Comments, please.