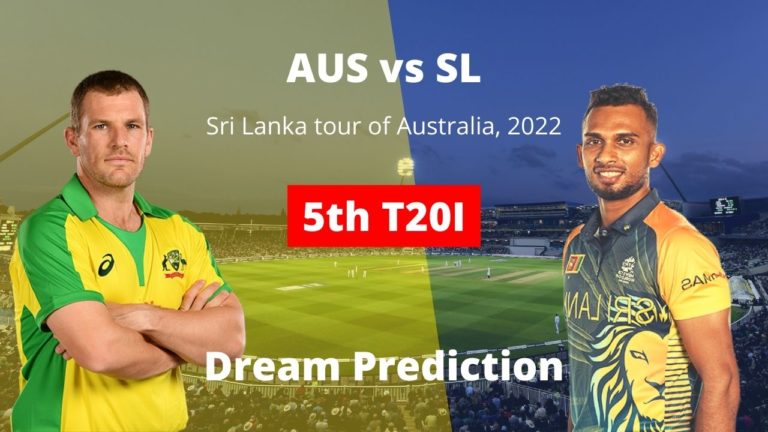 Australia vs Sri Lanka will play in the 5th T20I of the Sri Lanka tour of Australia 2022 at Melbourne Cricket Ground, Melbourne. We will cover AUS vs SL Dream11 Prediction, Probable Playing 11, and Fantasy Cricket Tips.

Australia have dominated the series so far and will look to make a cleansweep on their home soil.

They have been clinical in all the departments in this series. With the bat, Glenn Maxwell is looking very good and is consistently scoring runs. He played a brilliant knock of 48 in the last game

Aaron Finch is struggling to get going in this series and it will be crucial for him to score in this game.

With the ball, Kane Richardson and Jhye Richardson were excellent and picked up 2 wickets each.

Ashton Agar has been opening since the last two games but has not been at his best. Australia can again try some new faces and will look to register a sweep.

Sri Lanka have been good with the ball in the whole series but their batters have been disappointing and are not able to finish the innings well.

Pathum Nissanka has been consistently scoring runs at the top but is not getting much support from the other end.

Kusal Mendis also looked in great touch in the last game and scored 27 runs. Their lower middle-order has been a flop this series.

With the ball, Mahesh Theekshana has been brilliant since the last two games and picked up 1 wicket in the last game.

Lahiru Kumara was the pick from the bowlers in the last game and was very quick with the ball and picked up 2 wickets.

Sri Lanka have nothing to lose here and will look to end the tour on a positive note by winning the last game.

(The average score is based on the last 5 matches played at this venue.)

The pitch at the MCG is expected to be very similar to the last game with good pace and bounce. Anything above 160 will be a good score by the team Batting first.

AUS vs SL Head to Head

Agar opened in the last game and scored 26 runs and also picked up one wicket with the ball. He will be a good Captaincy choice if he opens again. He is an excellent choice for C and VC in AUS vs SL Dream11 Teams.

He is one of the best All-Rounders on the team. Maxwell is consistently scoring and can also bowl a few overs with the ball.

Richardson has been very impressive with the ball and is picking up wickets in death. He is also a good choice for C and VC.

Richardson will bowl in the powerplay and death and bowled brilliantly in the last game and picked up 2 wickets.

He will bowl in the middle overs and is constantly picking up wickets. We can expect at least 1-2 wickets from him.

McDermott is again a very talented player but has not looked very good after the first game. He scored 9 runs in the last game.

He is the only player who has been consistently scoring for them. Nissanka scored 46 runs in the last game and is a must-have pick.

Chameera will bowl in powerplay and death and can also hit a few big hits with the bat. He bowled decently in the last game and picked one wicket.

He scored 22 runs and took 2 wicket so far in this series.

He is one of their top bowlers and will bowl crucial overs. Theekshana picked up 1 wicket in the last game.

He looked brilliant in the last game and picked up 2 big wickets and was also very quick.