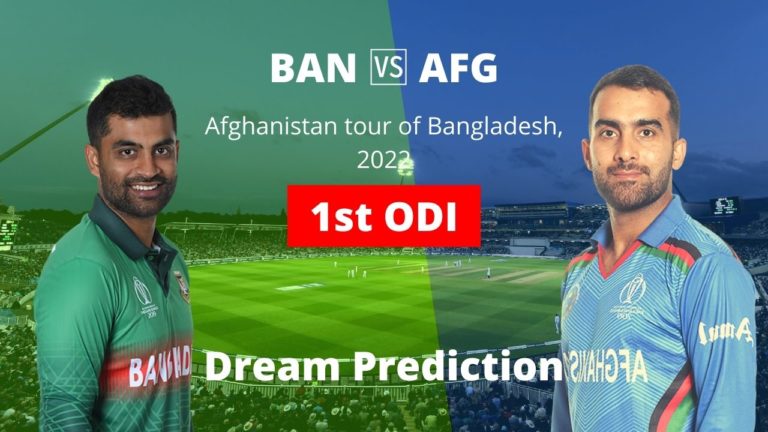 Bangladesh vs Afghanistan will play in the 1st ODI match of the Afghanistan tour of Bangladesh 2022 at Zahur Ahmed Chowdhury Stadium, Chattogram. We will cover BAN vs AFG Dream11 Prediction, Probable Playing 11, and Fantasy Cricket Tips.

The last time Bangladesh played ODI cricket was in July last year against Zimbabwe and comfortably registered a clean sweep in the 3 Match series.

Bangladesh will look to get back into the ODI mood and also try out some new faces in the likes of Mahmudul Hasan Joy, Ebadot Hosein and a couple more.

Skipper Tamim Iqbal, Shakib Al Hasan, Liton Das and Mushfiqur Rahim will be the key players with the bat. While Mustafizur Rahman will lead the Bowling attack.

Bangladesh will look to grab some World Cup Super League points and will look for some good performances by the youngsters.

Afghanistan recently clean swept Netherlands in their last ODI series and will be high on confidence going into this game.

Afghanistan do look very good on the paper with all their players having made their names in the T20 leagues around the World.

They also look like a solid side considering the conditions and with them having three World class spinners, Afghanistan certainly look like a side to compete.

For them, Rahmanullah Gurbaz, Rahmat Shah and Hashmatullah Shahidi will be the key men with the bat.

As Usual, Rashid Khan will be their key bowler along with Mohammad Nabi and Mujeeb Ur Rahman.

Both Afghanistan and Bangladesh look well balanced and we can witness a cracker of a contest between them.

(The average score is based on the last 5 ODI matches played at this venue.)

The pitch at Chattogram is expected to be slow with spinners being the key in both innings. It will get easy to bat as the game progresses. Anything above 250-260 will be a good total by the team Batting first.

BAN vs AFG Head to Head

He is one of the best All-Rounders on the team and needs no introduction. Shakib will bowl his full 10 overs and also bat in top order. He is a default pick for C and VC in BAN vs AFG Dream11 Team.

Tamim is another must-have pick in SL. He is one of their best batters and knows how to play big.

He is expected to bowl in the powerplay and death and is in brilliant form. Mustafizur Rahman is a must-have pick and another solid option for C and VC.

Mehidy Hasan is expected to be their key spinner and is another excellent pick considering the conditions.

Das will open the innings and is an attacking player. He looked in very good touch in the recent BPL.

Mahmudullah is a very experienced player and can also bowl a few overs. Considering two left-handers in the Afghani middle-order, he can bowl a good amount of overs.

Mushfiqur Rahim will be crucial if Bangladesh bat first. He can also give points behind the stumps but is expected to bat lower down the order.

He is left arm medium fast bowler. He took 7 wickets in 4 matches.

He is another very talented fast bowler who will bowl in powerplay and death and can pick up wickets in bulk.

He needs no introduction and is a world class bowler and can hit a few with the bat. Rashid Khan is another default choice for C and VC in your fantasy teams.

He will bat at the top and recently looked in very good touch in the PSL and is another top pick.

He is another excellent spinner and will bowl in powerplay and can trouble Tamim Iqbal and can be a Trump card.

Shahidi will bat in the middle-order and is also very experienced. He looked in great touch in the Netherlands Series.

He scored 2620 runs in 79 matches. Rahmat Shah is a good pick in fantasy team.

He is one of their best all-rounders. Naib will bat in the lower order and will bowl in the middle overs and also death. He can be a Trump card pick.