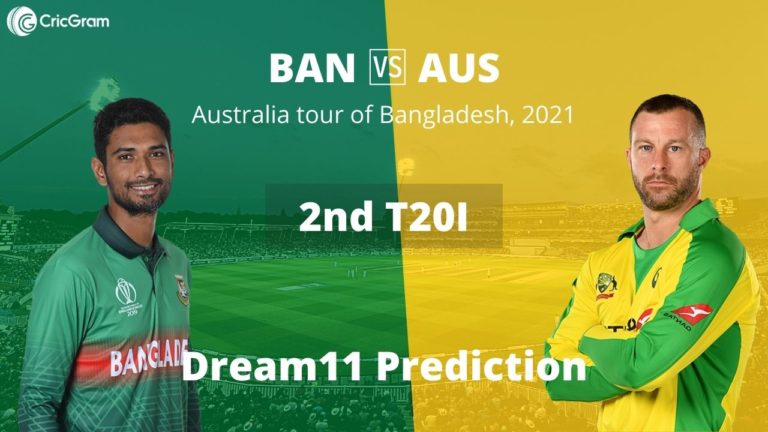 Bangladesh will take on Australia in the 2nd T20I at the Shere Bangla National Stadium, Dhaka.

Bangladesh has started the series with a bang and won the first game comfortably by 23 runs. They didn’t start well with the bat and managed to post a total of just 131 runs. Mohammad Naim gave a decent start for the team and scored 30 runs. Shakib Al Hasan also scored 36 runs but looked slow in his approach. All other batters were dismissed cheaply and hence were not able to finish well.

The bowling department was outstanding for them, especially the spinners as they took the game away from the opposition. Nasum Ahmed was the pick from the bowlers and ended his spell with the figures of 4/19 in his 4 overs. Mustafizur and Shoriful Islam also bowled pretty well at the end and picked up 2 wickets each.

The Bangladeshi team will be high on confidence going into this game and will look to continue their winning streak in this game as well.

The Aussies are missing their top-class batsman and are looking very weak with the bat. Except for Mitchell Marsh, no other batter can play a big inning for the team from the last series.

Their bowlers perfectly set the tone for their batters in the last game and restricted the home side to a low total of 131. The chase looked pretty simple, but the Aussies were not able to play the spin. Hazlewood and Starc bowled brilliantly and picked up 3 and 4 wickets respectively in their 4 overs. Adam Zampa also bowled well and picked up a wicket.

Their batting looked very average and was bundled out for just 108 runs. Mitch Marsh was the pick from batters as he scored 45 runs, but all other batsmen were dismissed cheaply. The team is highly dependent on the top order, and the middle-order looks very weak. Skipper Matthew Wade has pushed himself up down the order but failed to impress in the last game.

The Aussies will hope for a better batting performance from the batters in this game and will look for a win.

The Weather forecast shows a 50% chance of rain during the game but full game can be expected as the weather can quickly change.

The pitch looked very slow in the last game and was a spin friendly track. Anything above 150 would be a good total by the team batting first.

He is one of the best all-rounders on the team. Shakib was brilliant in their last series against Zimbabwe. He batted decently in the last game and scored 36 runs and also picked up a wicket with the ball and is an excellent pick for C and VC in BAN vs AUS Dream11 Prediction.

He is a world-class bowler and is known for his death bowling. Mustafizur picked up 2 wickets in the last game and is a must-have pick.

He will open the innings for the team. Soumya managed to score just 2 runs off 9 balls in the last game but is a talented batsman.

He is a young left-arm off-spinner who will bowl in the middle overs. Nasum bowled brilliantly in the last game and picked up 4 big wickets.

He is a left-arm fast bowler and will generally bowl in death. Shoriful bowled very well in the last game and picked up 2 wickets.

Mitchell Marsh is expected to bat at No 3 and can also bowl a few overs with the ball. He was outstanding in their last series against West Indies. Marsh batted very well in the last game and scored 45 runs but did not bowl any over with the ball.

Starc is a world-class bowler. He will bowl in power play and death. Starc bowled very well in the last game and picked up 2 wickets in the death.

He is a very good right-arm leg spinner who will bowl in the middle overs. Zampa bowled decently in the last game and picked up 1 wicket and was also very economical.

He will assist Mitch Starc in the power play and death. Hazlewood was brilliant in the last game and picked up 3 wickets in his 4 overs and is a good choice for C and VC as well.

He will open the innings for the team. Carey was dismissed for a duck in the last game but was brilliant in their recent ODI series.

He is a right-hand batsman, Josh Phillipe managed to score 9 runs in the last game but is a very talented batsman.

Wade will bat in the middle order for the team and will also do the finishing duties. He managed to score just 13 runs in the last game but is a very talented and experienced batsman.

He is a bowling all-rounder. If Wicket is spin friendly then Ashton Agar can be a very good pick in the BAN vs AUS Dream11 Team.