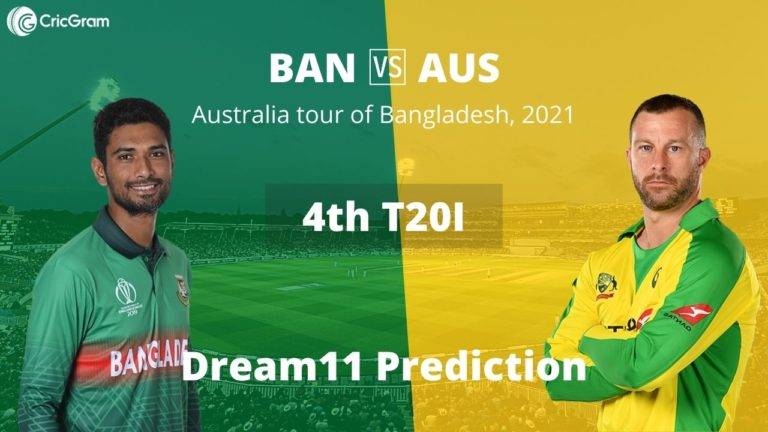 Bangladesh will take on Australia in the 4th T20I at the Shere Bangla National Stadium, Dhaka.

Bangladesh has created history and has sealed the series against Australia. This is the first time that Bangladesh has beaten the Aussies for three consecutive games. They have been excellent both with the bat and ball. Their bowling department has played a massive role for them in the series so far.

Batting first in the last game, they scored 127 runs which was not a great score but considering the pitch conditions it was a competitive total. Shakib Al Hasan has been batting pretty well in this series so far. He is playing small knocks but is very crucial ones. Their skipper also joined the party in the last game and scored match-winning 52 runs.

All other batters are yet to play a big knock but will look to play freely in the remaining two games. Their bowling has been top-notch in the three games so far. Mustafizur Rahman went wicketless in the last game but was very economical and gave away just 9 runs from his 4 overs. Shoriful Islam has been brilliant in the series so far and has picked up 6 wickets. They have already won the series and will look to test their bench strength ahead of the World Cup.

They will be very low on confidence after losing two back-to-back series. None of the batters have been successful in taking the team to victory so far. Their skipper changed his position in the last game and opened the innings but again to failed to score runs.

Bowling has been good for both teams but it is their batting that has been very disappointing. Aussies have nothing to lose in the last games and will hope to at least win these two games and head back home.

Bowling first in the last game, they bowled pretty well and restricted the home side below 130. Nathan Ellis’s debut has been a fairy tale as he was going for runs but picked up a hattrick in his last 3 balls and ended his spell with the figures of 3/34. Zampa and Hazlewood also bowled very well and picked up 2 wickets each.

Talking about their batting, Mitch Marsh scored a brilliant fifty in the last game and has scored 141 runs from his three games so far. Apart from him, all the batters were dismissed cheaply. The visitors will look to avoid a clean sweep and will play for pride in the remaining two games.

The Weather forecast shows some showers and overs can be reduced in this game.

The pitch looks very slow and batting has been tough so far. Bowlers have enjoyed bowling on this track. A score of around 140 would be good for the team batting first. Winning the toss and batting first has been the trend so far.

He is one of the best all-rounders on the team. Shakib scored 26 runs with the bat and also picked up 1 wicket with the ball in his 4 overs and is the best option for C and VC in BAN vs AUS Dream11 Prediction.

He is a world-class bowler and is known for his death bowling. Mustafizur has picked up 5 wickets in the series so far. He went wicketless in the last game but was very economical and gave away just 9 runs.

He is a left-arm fast bowler and will generally bowl in death. Shoriful has been excellent in the series so far and has picked up 6 wickets so far.

He is the team’s skipper and will bat in the middle order and bowl a few overs with the ball. Mahmudullah scored a brilliant fifty in the last game and proved his worth.

He is a young left-arm off-spinner who will bowl in the middle overs. Nasum bowled very well in the last game and picked up 1 wicket in his 4 overs.

Mitchell Marsh will bat at No 3. He is the highest run-scorer in the series with 141 runs under his name and can also bowl an over or two with the ball and is another good option for C and VC in the BAN vs AUS Dream11 team.

He is a very good right-arm leg spinner who will bowl in the middle overs. Zampa bowled very well in the last game and picked up 2 wickets.

He will bowl in the power play and death. Hazlewood has been excellent for the team so far and has picked up 6 wickets in his three games.

He made his debut in the last game and it turned out to be his dream debut as he picked up a hat trick in the last three balls.

He replaced Philippe in the last game and batted very well and scored 35 runs from 41 balls.