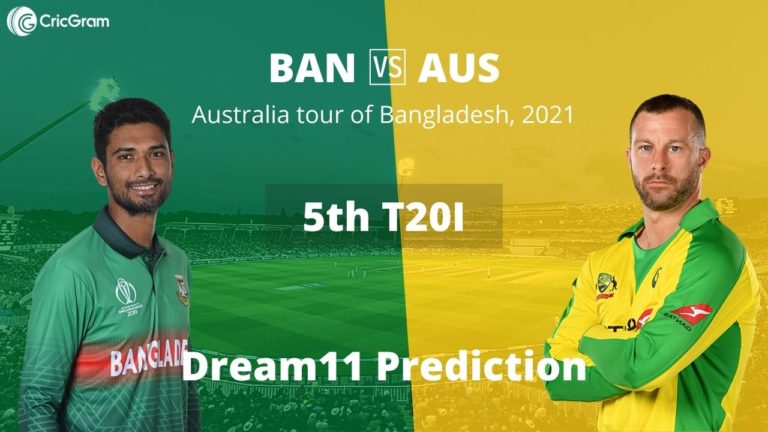 Bangladesh will take on Australia in the 5th T20I at the Shere Bangla National Stadium, Dhaka.

Bangladesh finally ended their winning streak in the last game. It would not bother them much as they have already won the series. Batting has been extremely challenging throughout the series and the last game was no different.

Batting first, they managed to score only 104 runs. Naim has looked good in the whole series but is unable to convert his starts into a big score and scored 28 runs in the last game. All the batters struggled in the last game.

They will look to try different combinations in this game and we can see few changes in the XI.

They have finally won a game in this series. They were excellent with the ball in the last game and full use of the pitch conditions. Andrew Tye and Mitchell Swepson were the pick from the bowlers and picked up 3 wickets each. Swepson was waiting for his opportunity and finally cashed by picking up three wickets. All in all, the bowlers were excellent in the last game.

Their batting department also showed signs of improvement in the last game and will look to continue this in this game as well. Dan Christian’s knock of 39 runs in the last game was the highlight from the innings as he smashed Shakib Al Hasan for 5 sixes in an over. Ashton Agar’s knock 27 runs were also crucial in the end.

The Aussies will look to finish their nightmare with a win in this game before heading to their home.

The Weather forecast shows a high chance of rain (80%) during the game and overs are likely to be reduced.

The pitch has been very bad and slow throughout the series and not a typical T20 wicket. Both spinners and pace bowlers are getting assistance from the surface. Anything above 130 should be an ideal total.

Shakib scored 15 runs with the bat in the last game and was also very expensive with the ball but is a big match player and is a good option for C and VC in BAN vs AUS Dream11 Prediction.

He is a world-class bowler and is known for his death bowling. Mustafizur has been brilliant throughout the series and has picked up 7 wickets so far and is a must-have pick in this game.

He is a left-arm fast bowler and will generally bowl in death. Shoriful has been very consistent with the ball in the series. He bowled only 2 overs in the last game and picked up one wicket.

He is the team’s skipper and will bat in the middle order and bowl a few overs with the ball. Mahmudullah was out for a duck in the last game.

He is a young left-arm off-spinner who will bowl in the middle overs. Nasum has been the find for Bangladesh in this series. He bowled pretty well in the last game and picked up 1 wicket.

Naim has given good starts for the team in this series and will look to finish the series on a high. He batted very well in the last game and scored 28 runs.

Mitchell Marsh will bat at No 3. He is the highest run-scorer in this series with 152 runs in his 4 games and is another good option for C and VC in the BAN vs AUS Dream11 team.

He will bowl in the power play and death. Hazlewood has been excellent for the team so far and is also the highest wicket-taker in this series with 8 wickets under his name and is a must-have pick.

Andrew Tye is known for cutters and death bowling. He bowled brilliantly in the last game and picked up 3 wickets in his 3 overs.

Swepson is a right-arm leg spinner and will bowl in the middle overs. He was excellent in the last game and picked up 3 big wickets.

He batted very well in the 3rd game but managed to score only 5 runs in the last game but is a very talented batter.

He was promoted up the order in the last game and scored 39 runs from just 15 balls and can also bowl an over or two with the ball and is a trump card pick for BAN vs AUS Dream11 Team.