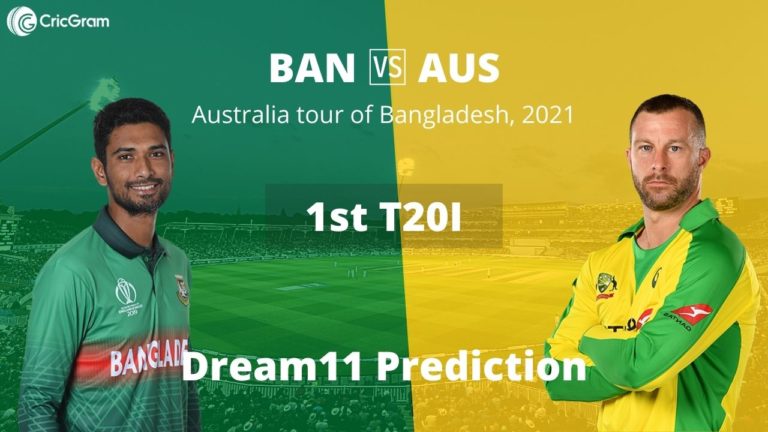 Bangladesh will take on Australia in the 1st T20I at the Shere Bangla National Stadium, Dhaka.

After a long away tour against Zimbabwe, Bangladesh will be playing 5 T20I games against Australia at their home. They won their last series comfortably against Zimbabwe by 2-1.

They will be without their senior players Mushfiqur Rahim and Mustafizer Rahman as the former has kept him unavailable for this series and the latter is expected to miss the first two games owing to his ankle injury.

Liton Das and Tamim Iqbal are also unavailable for this series. Mahmudullah will lead the side in the absence of their regular skipper. The Bangladeshi team looks a bit weak on the paper and players like Shakib Al Hasan and Mahmudullah need to lead from the front in order to win this series. Shakib was brilliant in their last series against Zimbabwe and will look to replicate his performance in this series as well.

The Aussies did not have a great time in the Caribean after losing their last series against Windies by 4-1. They are already without their main players but will now also be without their regular skipper Aaron Finch who will miss this series because of his knee injury. Matthew Wade will lead the side in his absence and will have to play a great role with the bat as well at the top.

Their bowling looks very strong compared to their batting and the bowlers are expected to play a crucial role in this series. Their spinner Adam Zampa will be vital with the ball on the Asian tracks. Josh Philippe is expected to open the innings alongside Ben McDermott. Wade has hinted that he would be batting lower down the order as he is expected to play that role in the World Cup.

Mitch Marsh was excellent in the last series against West Indies both with the bat and ball and will be their key man in this series as well. Alex Carey will bat in the lower middle order and will do the finishing duties for the team. Though the Aussies are without their main players they still look like a better team on paper compared to Bangladesh. Both the teams will look to try new combinations ahead of the World Cup later this year.

The Weather forecast does not look very good at the moment with around 70% chance of rain during the game.

The pitch is generally expected to be a good wicket to bat on with some assistance for the bowlers as well. The weather does not look very promising.

He is one of the best all-rounders on the team. Shakib was brilliant in their last series against Zimbabwe. He will bowl four overs with the ball and also bat in the top order and is an excellent pick for C and VC in BAN vs AUS Dream11 Prediction.

He will open the innings for the team. Soumya looked in good touch against Zimbabwe and can also bowl a few overs with the ball.

He is the skipper of the team and will bat in the middle order and can also bowl a few overs with the ball. Mahmudullah is a very experienced player and is also a good pick for Captain and Vice-Captain in your fantasy side.

He is a young all-rounder and is known for his bowling. Saifuddin was brilliant in the last series and is another top pick from the team.

He is a left-arm fast bowler and will bowl in the powerplay and death. Taskin looked in good touch with the ball in the last series and is another good pick.

Mitchell Marsh is expected to bat at No 3 and bowl a few overs with the ball. He was outstanding in their last series against West Indies and will play a crucial role in this series as well. Marsh is a perfect option for C and VC in the BAN vs AUS Dream11 team.

He is a right-hand batsman, Josh Phillipe don’t have very good record in T20Is but He is a very good batsman.

Wade will bat in the middle order for the team and will look to confirm his place for the World Cup. He opened in their last series and looked decent with bat.

Starc is a world-class bowler. He was not much impressive in their last T20I series but was brilliant in the ODI series and will look to continue his performance for the team. Mitch Starc will bowl in power play and death.

He is a very good right-arm leg spinner who will bowl in the middle overs. Zampa will play a crucial role in this series with Asian wickets usually supporting spinners.

He will assist Mitch Starc in the power play and death. Hazlewood was brilliant in their last T20I series and will be a must-have pick in your fantasy sides.

He is a bowling all-rounder. If Wicket is spin friendly then Ashton Agar can be a very good pick in Dream11 Team.