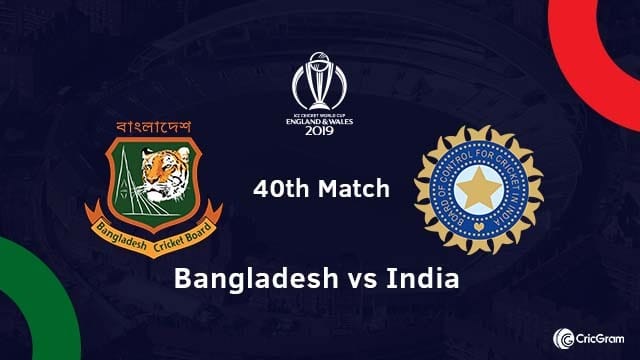 Bangladesh and India will face-off in the 40th match of World Cup’19 at Edgbaston in Birmingham. We will provide Bangladesh vs India Dream11 Team Prediction, Preview and Probable Playing XI for the match.

Bangladesh is sixth on the points table with three wins and three losses. However, These numbers don’t give justice to their performance yet in World Cup 2019 as they have put a solid show against all top teams. They have to win their remaining two matches to keep their slim qualification chances alive and will be eager to give a tough challenge to the Indian team.

In the last encounter, They defeated Afghanistan by 62 runs. Batting first, Shakib Al Hasan scored another fifty while Mushfiqur Rahim scored crucial 83 runs to lead his team to a total of 262. Mosaddek Hossain also played a good cameo of 35 runs in just 24 balls. In defence, Shakib Al Hasan was at his best taking brilliant five wicket-haul while Mustafizur took two scalps to successfully defend the target.

Team India is one of the strong contenders for World Cup’19 and has performed brilliantly till now. They lost their last encounter to England after five consecutive victories. India’s top-order has been in brilliant form along with Hardik Pandya and MS Dhoni while bowlers Bumrah, Shami, Kuldeep and Chahal have bowled well with Shami leading from the front taking thirteen scalps in three encounters. They will be eager to defeat Bangladesh and confirm their spot in semi-finale.

In the previous encounter, They lost to England by 31 runs. Bowling first, Shami took maiden five wicket-haul and was supported by Bumrah to restrict England at 337. In the chase, Rohit Sharma scored brilliant 102 runs while Virat Kohli scored 66 runs. In addition, Hardik and MSD also scored 45 and 42* respectively but failed to chase the big target and were left behind by 31 runs.

This is the same pitch, Where India vs England match was played. It helps the Batsman at starting, but after it is slow down.

Mahmadullah is suffering from injury but is likely to recover well before tomorrow’s encounter.

Shakib Al Hasan and Mosaddek Hossain will play the role of an allrounder. Mehidy Hasan, M Saifuddin, and M Mortaza can also be handy with the bat.

Mehidy Hasan and Shakib Al Hasan will be the key spinners along with Mosaddek Hossain while Mustafizur Rahman, M Mortaza, and M Saifuddin will lead the pace attack of Bangladesh along with Soumya Sarkar.

After Shikhar Dhawan, Vijay Shankar has also been ruled out of WC’19 due to injury. Mayank Agarwal has been announced as the replacement.

Hardik Pandya will play the role of an allrounder. Kedar Jadhav can also bowl a few overs of spin.

Jasprit Bumrah and Mohammad Shami will lead the pace attack along with Hardik Pandya while Yuzvendra Chahal and Kuldeep Yadav will handle the spin attack.

No changes are expected in the playing XI. However, India can play with three seamers. There is also a chance that Ravindra Jadeja can replace Kuldeep Yadav.

Anyone among Liton Das and Soumya Sarkar will open the innings with Tamim Iqbal.

Liton Das played match-winning 94* against Windies and is in good form. He can be a good pick in your IND vs BAN Dream11 team. He also has a good record against India team.

Rishabh Pant is a talented and attacking batsman and can score quick runs in the middle order. He scored 32 runs against England.

Rohit Sharma has regained his form in World Cup 2019 scoring 440 runs in six matches involving match winning 122*, 57, 140 and 102 in the last encounter. In the absence of Dhawan, He will have added responsibility to give a good start to the Indian team.

Tamim Iqbal has got starts in all encounters till now but has failed to convert into a big knock. He has scores of 48, 62 and 36 in the last three matches.

KL Rahul will open the innings and can change the course of match single-handedly. He scored 57, 30, 48 and 0 runs in four matches opening the innings.

Saumya Sarkar has shown attacking intent opening the innings and has scores of 45, 25, 2, 10, 29 and 3 in six matches. He can also bowl a few overs of medium pace and took three wickets against Australia.

Mahmudullah has performed consistently for Bangladesh and plays in an attacking manner in the middle order. He scored 69 runs against Australia.

Kedar Jadhav can be a smart pick in batting category and will also save your credits. He scored crucial 52 runs against Afghanistan. He can also chip in with a few overs if required.

Shakib Al Hasan has been in brilliant form in WC’19 scoring 476 runs in six matches and has also taken ten wickets. He can be a good choice for captain or vice-captain in small leagues tomorrow.

Hardik Pandya is the X-factor of team India. He can hit big sixes along with lethal bouncers. He scored attacking 17*, 48, 26, 7, 46 and 45 in six matches and also has also taken five scalps till now.

Mosaddek Hossain has made handy contributions with the bat as well as ball and can be a good pick among all-rounders. He scored attacking 35 and took one scalp against Afghanistan.

Mohammad Shami is in lethal form and has taken two consecutive four-wicket hauls against Afghanistan and West Indies and took five scalps in the last encounter against England.

Jasprit Bumrah is one of the best pacers in world cricket and is a wicket-taking bowler in initial, middle as well as death overs. He has taken ten scalps in six encounters.

Mustafizur Rahman is a talented left-arm pacer and has taken ten scalps till now in WC’19. He can be effective in initial and death overs.

Yuzi Chahal has been the best spinner for India taking ten scalps in six matches including a four-wicket haul against South Africa.

Mohammad Saifuddin can play the role of an allrounder. He has taken ten wickets till now in five matches but has failed to keep a check on his economy.

Mehidy Hasan will lead the spin attack of Bangladesh and has the ability to chip in with wickets at regular intervals. He has taken five scalps till now and can also be handy with the bat.

Kuldeep Yadav can trouble batsmen with his witty spin. He has taken only five scalps till now and is not in his best form.

Skipper Mashrafe Mortaza has not found his form yet in WC’19 and is also suffering from fitness issues. He can also be handy with the bat.

If you liked Bangladesh vs India Dream11 Prediction, Then follow us on Telegram for Dream11 Team and Fantasy Cricket Tips. You can also find us on Twitter. What are your Captain and Vice-captain choice of Dream11 Team? Comments, please.