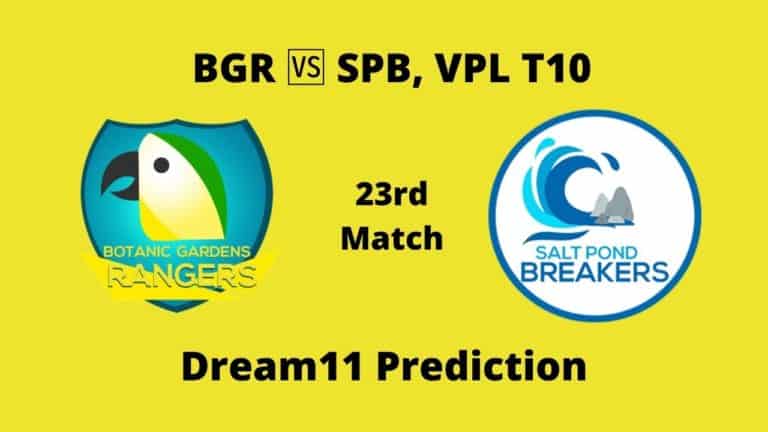 The 23rd game of the Vincy Premier League will see Botanical Garden Rangers, who are almost out of the tournament. BGR will take on Salt Pond Breakers, who have lost their last three matches in the tournament so far.

Both the teams have played seven games in the tournament so far. Botanical Garden Rangers are at the bottom of the table after winning just one game out of seven games so far. Salt Pond Breakers are also struggling as they have won just two games out of their seven matches played so far.

The last H2H encounter between these teams saw BGR win 7 wickets. Winston Samuel was the pick from the bowlers as he bowled brilliantly and picked up three wickets in his 2 over spell. D Delpleche and Kimali Williams also bowled well and picked up a wicket each. Harper was pick from the batters as he scored 32 runs from 21 balls. Their skipper Kesrick Williams also batted well and scored a crucial 23 runs, which lead the team to victory

On the other hand, Salt Pond Breakers are coming into this game after losing their last game against La Soufriere Hikers. SPB batted well and scored 123 runs in their 10 overs but leaked too many runs with the ball.

Rickford Walker and Kensley Joseph were the picks from the batters as they scored 30 and 32 runs, respectively. With the ball, their skipper Ambris picked an early wicket in the powerplay but were then not able to pick up many wickets in the match, and in the end, LSH won the game by 8 wickets.

Both the teams look well-balanced going into this game. SPB desperately need a win in this game to stay alive in the competition.

The pitches in the Vincy Premier League are supporting the bowlers. Big runs are being scored in the recent games, but still, the bowlers have the edge over the batters. A mixture of all-rounders and bowlers will be a good choice for the game. Anything around 100-110 would be a competitive total.

The weather in Kingstown is expected to be clear so far, with no chance of rain during the match.

If we get any news, we will update here.

He has not performed according to his standards in the tournament so far. Williams managed to pick up just 2 wickets in his 6 games this season. He batted brilliantly in the last game and scored crucial 23 runs with the bat.

Warper will do the keeping duties for the team and will bat in the top order. He batted brilliantly in the last game by scoring 32 runs.

He will be the key pacer for the team along with Kesrick Williams. Delpesche will bowl His 2 overs in the middle and death. He picked up one wicket in the last game.

Williams is expected to bowl his 2 overs in the middle overs. He picked up one crucial wicket in the last game.

The spinner bowled brilliantly in the first few matches of the tournament. He went wicketless in the last game and was also very expensive.

He is expected to open the innings alongside Walters. Thomas is an attacking batsman. He scored 15 runs in the last game.

He will open the innings for the team. Walters scored 8 runs in the last game. He has totally scored 77 runs in the tournament so far.

Samuel will bowl his 2 overs after the powerplay. He was outstanding with the bowl in the last game as he picked up 3 wickets in his 2 over spell.

He is the team captain and will play a crucial role in the bat and bowl. Ambris will bowl his 2 overs in the powerplay and open the innings with the bat. He scored nine runs in the last game and also picked up a wicket with the ball. Sunil Ambris is the best choice for C and Vc for BGR vs SPB Dream11 Prediction.

Johnson will lead the pace attack for the team. He could also score handy runs with the bat. He scored 18 runs in the last match but went wicketless with the ball.

Hoyte is bowling his 2 overs in the middle overs in the absence of Layne. He picked up one wicket with the ball in the last game.

He will bowl in the middle overs for the team. Jevon Samuel picked up one crucial wicket in the last game. He has totally picked up 6 wickets in 5 games so far.

He will bat in the middle order for the team and play the role of a finisher. He scored 30 runs in the last game.

He is expected to bat in the lower middle order for the team. Joseph scored 32 runs off 20 balls in the last game. He could also be promoted up the order in this game.

He played the role of the 5th bowler in the last game but was very expensive with the ball and also went wicketless.

Jeremy Haywood is one of their top bowlers but has performed average this season. He did not play the last game. He can be tried in the grand league if he plays

He will do the keeping duties for the team. Sween will bat in the middle order for the team. He went for a duck in the last H2H between both the teams.

Layne will bat in the top order and bowl his 2 overs in the middle overs with the bowl. He has picked up 4 wickets in his 3 games this season so far. He did not play the last match.