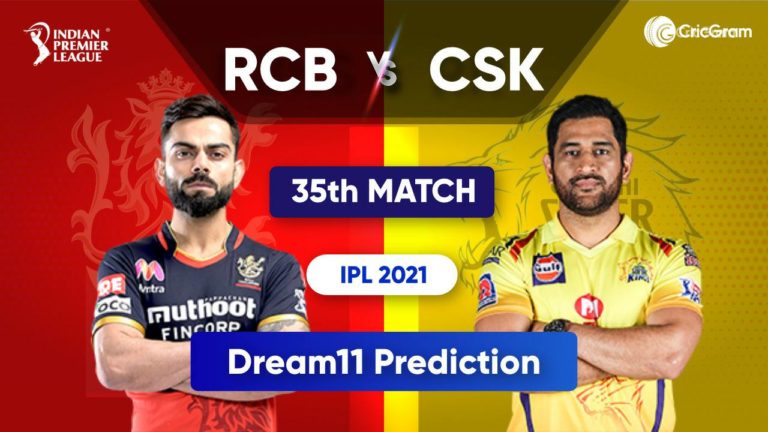 The Royal Challengers Bangalore and Chennai Super Kings will be played in the 35th match of IPL 2021 at Sharjah Cricket Stadium, Sharjah. We will cover BLR vs CSK Dream11 Prediction, Probable Playing 11, and Fantasy Cricket Tips of IPL 2021.

Royal Challengers Banglore played well in the initial matches of the season but have struggled in the recent games. They lost the last game and are currently at the 3rd position on the points table.

Virat Kohli appeared to be struggling this season but has played well in a couple of matches, and his partner Padikkal hit a century but failed in the remaining games. At No.3, they tried a new player, Srikar Bharat, who could not perform in the last match.

Maxwell and ABD performed well in some of the matches with the middle-order batsmen but got out early in the last game. Even the debutant Hasaranga got out for a duck.

The bowlers performed well in most of the matches but struggled in the last game. The leading wicket-taker, Harshal Patel, went wicketless, and only Yuzvendra Chahal managed to pick up a wicket. Jamieson and Hasaranga were expensive in the previous game.

RCB would be hoping to get back to winning ways and climb up the points table.

This season, Chennai Super Kings have been in brilliant form as they have six out of the eight matches and are currently at the top of the points table. They won the last game comfortably by 20 runs.

In the lower-order, Jadeja provided good support but batted slow, and Dwayne Bravo scored sixes and pushed the run rate higher. Dwayne Bravo and Deepak Chahar picked up most of the wickets. Josh Hazlewood and Shardul Thakur picked up one wicket each.

This season, Chennai Super Kings are looking very strong and have a good chance of winning the title this year.

The weather will be clear skies, and the temperature will be around 35 degrees Celsius.

The ground is small here, and the batsmen can score boundaries easily. There were many high-scoring games in the last season, and we can expect the same sort of pitches this time. Even a score of 200 is chasable on this ground.

Virat Kohli has not been in good form recently and has not scored a big fifty or hundred. He scored only five runs in the last match. Virat is very good Captain choice in RCB vs CSK Dream11 Team.

He opens the innings for BLR and has played well in some of the innings. Padikkal scored 22 runs in the last match.

Except for the initial matches, Maxwell has not scored much in this season. He managed to hit only 10 runs in the last game.

ABD is a match-winner for RCB but got out for a duck in the last match. He can be crucial in the death overs.

Jamieson is a bowling all-rounder and has performed decently. He scored four runs and was expensive with the ball, and went wicketless.

Chahal has been out of form this season. He was expensive in the last match but managed to pick up a wicket.

Harshal Patel is the leading wicket-taker but has struggled to pick up wickets in the last few matches. He scored 12 runs and went wicketless in the previous game.

Moeen Ali generally bats at No.3 and can bowl a few overs of spin. He went wicketless and was out for a duck in the last match. Moeen Ali is also a very good Captain choice in BLR vs CSK Dream11 Fantasy Team.

He opens the innings for CSK and is one of the top five leading run-scorers this season. Faf was out for a duck in the last match.

He is a young talented batsman and opens along with du Plessis. Gaikwad batted brilliantly, scoring 88* runs in the last match.

He is a bowling all-rounder. Sam Curran scored 52 runs and took 9 wickets so far in IPL 2021. If plays He is very good pick in BLR vs CSK Dream11 Team.

R Jadeja bats in the middle-order and bowls left-arm orthodox. He batted a little slow, scoring 26 runs, and went wicketless.

He bowls brilliantly in the powerplay and provides a breakthrough in most of the matches. Deepak picked up two wickets for just 19 runs.

Bravo is an experienced all-rounder, and bats lower the order and bowls in the death overs. He picked up three wickets and scored 23 runs from just eight balls in the last match.