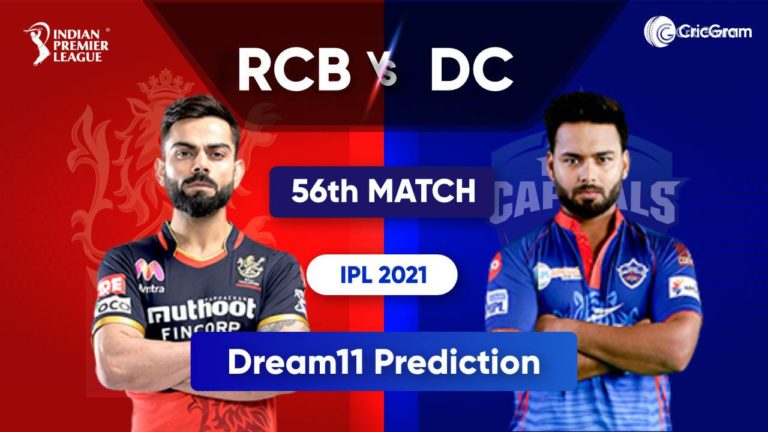 Royal Challengers Bangalore and Delhi Capitals will play in the 56th match of IPL 2021 at Dubai International Cricket Stadium, Dubai. We will cover BLR vs DC Dream11 Prediction, Probable Playing 11, and Fantasy Cricket Tips of IPL 2021.

Royal Challengers Bangalore have won eight out of the thirteen matches and are currently at the 3rd position on the points table.

Virat Kohli hasn’t scored much in the last couple of matches, and Devdutt Padikkal was extremely slow in the previous game. At No.3, Daniel Christian has not scored more than one run throughout the season. Maxwell almost scored his fourth fifty in a row in the middle but missed by just ten runs. ABD’s struggle with the bat continues this season.

Harshal Patel has been the best thing for RCB this season as he is currently the leading wicket-taker and spinner Yuzvendar Chahal has performed consistently. The medium-pacers Daniel Christian and George Garton managed to pick up two and one wicket, respectively.

RCB is likely to finish at the third position on the IPL 2021 points table unless any miracle happens against DC.

Delhi Capitals is at the top of the points table with ten wins, three losses, and 20 points.

Dhawan performed consistently with the bat this season and provided goos start to the team, but Prithvi Shaw has failed to maintain the consistency and played only a couple of good innings. The two key players, Iyer and Pant, fell early in the last match, but Hetmyer batted brilliantly, finishing the game.

The bowler’s performance has been consistent, especially Axar and Avesh Khan have been picking up most of the wickets. Nortje has also picked up some crucial wickets.

The weather will be hot and humid.

The pitch has become slower, but batters can score big if they time the ball and bat aggressively. The spinner will get a lot of help from the pitch, and fast bowlers can also get wickets by varying the pace.

Virat Kohli looked in good form in a couple of matches but has failed to continue the momentum. He scored only five runs in the last match.

Devdutt Padikkal has maintained a low strike rate this season which has been a concern for the team. He scored 41 runs from 52 balls in the last match.

Maxwell is in extraordinary form this season as he scored 40 runs from just 25 balls in the last match and is the team’s leading run-scorer.

Harshal Patel has found a way to pick up wickets in every match and got three wickets in the last game. He is very good Captaincy choice in BLR vs DC Dream11 Team.

Chahal is picking up wickets and managed to get one in the last match for just 27 runs.

Dhawan looks back in form as he scored 39 runs in the last match. He is the third-highest run-scorer this season.

Shreyas Iyer is in good form but got out early in the last match, scoring only two runs.

Pant has performed the role of skipper and middle-order batsman perfectly this season. He scored 15 runs in the last match.

Avesh Khan has become the go-to bowler for DC and managed to pick up a wicket in the last match. Avesh Khan is also a very good Captain choice in RCB vs DC Dream11 Team.

Rabada struggled to pick up wickets this season and went wicketless in the last match.

Nortje picked up at least a wicket in every match. He was slightly expensive when compared to other games this season.

Axar is a left-arm orthodox bowler and has also played some match-winning knocks. He scored only five runs but managed to pick up two wickets in the last match.

Christian has been batting at No.3 in the recent matches and can bowl a couple of overs. He scored only one run but managed to pick up two wickets in the last game.

This is a risky match so try to play only Grand Leagues.