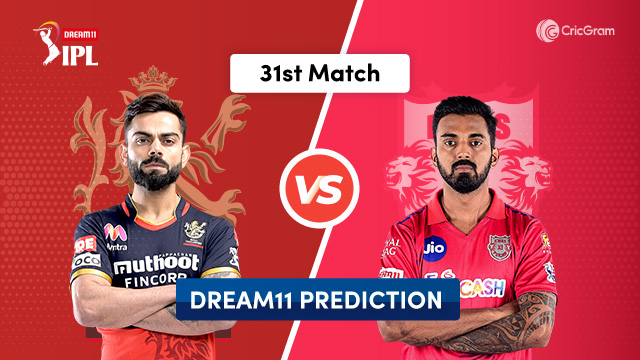 RCB has performed well so far in this season as they are currently at the 3rd position on the points table with 5 wins and 2 losses and a total of 10 points.

The batting unit of the team looks very strong with both the openers Aaron Finch and Devdutt Padikkal looking in good form and the middle order Virat Kohli and AB de Villiers can take the game away from the opposition from any position.

Their lower middle has also got good power hitters like Shivam Dube, Washington Sundar, and Chris Morris who can play cameos if required. Bowling was always a concern for RCB but this time things have changed for them and they have found a good balance in their bowling.

Chris Morris and Navdeep Saini are giving a goo start without conceding runs in the powerplay and Washington Sundar has been playing a very crucial role for them by picking up wickets in the power play.

Yuzvendar Chahal as usual has been bowling well in the middle overs and picking up wickets and the death overs have been looked after by Siraj and Udana.

On the whole, we can say that RCB is looking in a very good rhythm with all its players contributing in every match in one way or the other.

The chance of Kings XI qualifying is looking slim this season as they are currently at the bottom of the points table with 1 win and 6 losses and a total of 2 points.

Nothing has worked well for KXIP except for their top-order. Both KL Rahul and Mayank Agarwal have been performing well and are the top two contenders for the Orange Cap. Nicholas Pooran has also appeared to be in good touch hitting some big sixes in every match.

The problem for KXIP has been the approach in their games. In some of the games, they had almost won but couldn’t take it over the finishing line due to the approach. In few matches, their bowlers struggled a lot to pick up at least one wicket and in some matches, their middle order failed to score even run a ball.

KXIP has many match-winners on their side but they have all failed to perform as a team and that has cost them most of the games. With the inclusion of Gayle in the next match, we can hope that their middle-order gets strengthed and they can perform more aggressively as a team.

If KXIP wants to qualify for playoffs then they have to start winning every match from here or else there is no chance for them.

Average 1st Innings Score: 209 (From 6 matches played at this venue so far in this season)

Average 2nd Innings Score: 177 (From 6 matches played at this venue so far in this season)

The pitch here is considered perfect for batting and we have seen some high scoring games here. But from the past couple of matches, it has appeared that the pitch has slow down very much and it is not that easy to score runs here.

The team winning the toss would want to bat first as the ball comes nicely on the bat in the first innings.

Five of the six matches have been won by the team batting first at this venue.

One of the best batsmen in the world, skipper Virat will be playing at NO.3 for RCB. He is the highest run-getter so far in the history of IPL and has five centuries to his name. Kohli scored 33* runs from 28 balls in the last match.

This 20-year-old left-handed batsman has got a lot of talent. Padikkal batted decently, scoring 32 runs in the last match.

Mr.360, who can play shots to any corner of the ground and will be important in the middle order. AB batted extraordinarily scoring 73* runs from just 33 balls.

Finch is playing for RCB for the 1st time in IPL. He opens the innings for them and scored 47 runs from 37 balls in the last match.

He is an allrounder who is equally good with both bat and ball. Morris will play a crucial role in the lower middle order with the bat. He bowled brilliantly, picking up 2 wickets for just 17 runs in his 4 overs.

He is a right-arm leg-spin bowler. Chahal is an excellent bowler in the T20 format and troubles the batsmen with his wrong-uns. In the last match, he picked up 1 wicket for just 12 runs in his 4 overs.

He is a left-arm medium-fast bowler and is mostly known for his slower deliveries. Udana was a little expensive in the last match but managed to pick up 1 wicket.

He is a bowling allrounder and can play some big shots down the order. Sundar bowled brilliantly in the last match picking up 2 wickets for just 20 runs in his 4 overs.

He is a right-arm fast bowler and made his debut last season. Saini has a lot of talent and can be a good pick for RCB. He bowled well in the last match picking up 1 wicket.

He is a batting allrounder and can bowl a few overs of medium pace. Dube did not bat and bowl in the last match.

He is a right-arm fast bowler and bowls at a good pace. In the last match. Siraj bowled well, picking up 1 wicket.

Skipper Rahul opens the innings for the team. He can play the shots right from the start of the inning and has two IPL hundreds to his name. Rahul batted well scoring 74 runs from 58 balls in the last match.

He is a decent striker of the ball and plays according to the situation of the match. Agarwal played well scoring 54 runs in the last game.

He is the most destructive batsman in the history of IPL and can cause havoc if he gets going. Gayle might play this match against RCB.

A left-handed wicket-keeper batsman can play destructive innings in the middle order. Pooran scored 16 runs from 10 balls in the last match.

Shami is one of the experienced bowlers for KXIP. He bowls at a good pace and is good at controlling runs in the death overs. In the last match, he bowled decently picking up 1 wicket.

He is a young right-arm leg break bowler and has impressed everyone with his performance. Bishnoi bowled well in the last match, picking up 1 wicket.

He is a right-arm fast bowler and lower order right-handed batsman. He didn’t take any wicket in Dream11 IPL 2020 but Jordon can be good pick in BLR vs KXIP Dream11 Team.

He is a left-arm fast bowler and has been consistent at picking up wickets. Arshdeep picked up 1 wicket in the last match.

A Right-arm off-break bowler and is mostly known for his wrong-uns. Mujeeb was very expensive in the last match and also went wicketless.