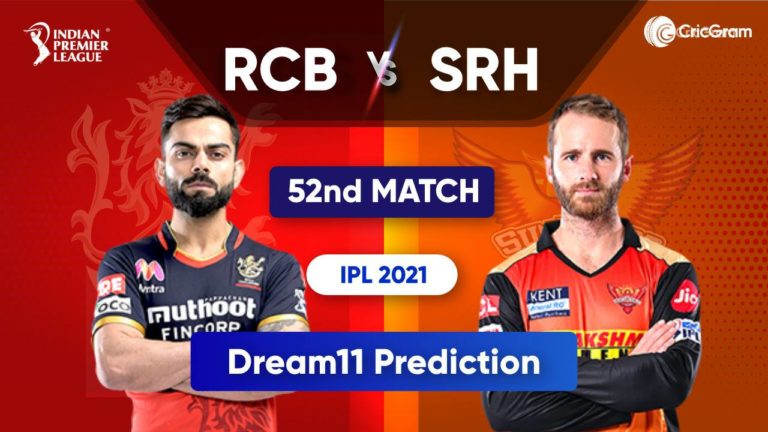 Royal Challengers Bangalore and Sunrisers Hyderabad will play in the 52nd match of IPL 2021 at Sheikh Zayed Stadium, Abu Dhabi. We will cover BLR vs SRH Dream11 Prediction, Probable Playing 11, and Fantasy Cricket Tips of IPL 2021.

Royal Challengers Bangalore have won three matches in a row and are currently at the 3rd position on the points table with 16 points.

Virat Kohli and Devdutt Padikkal provide a decent start, but they need to improve the run rate. They tried Daniel Christian at No.3, and he was out for a duck in the last match. Maxwell is in tremendous form and has scored three fifties in three games, and ABD finally managed to score some runs in the previous game.

The bowling unit has time and again proved itself. Yuzvendar Chahal bowled beautifully, picking up three wickets in the last match. Shahbaz Ahmed and Garton picked up one wicket each in the previous game.

RCB qualified for the playoffs and has hopes to finish in the top two by the end of the league stage.

Sunrisers Hyderabad is likely to finish at the bottom of the IPL points table as they have won only two out of the twelve matches.

Jason Roy performed well only in one match of the season, and Wriddhiman Saha played decently in some games but was out for a duck in the last game. Even the skipper, Williamson, has not contributed much this season. Only Abdul Samad has been playing some brilliant shots down the order and has been impressive.

The bowling department has performed way better than the batsmen this season. Jason Holder and Rashid Khan have been consistently picking up wickets for the team. Siddarth Kaul managed to pick a wicket in the last match.

Sunrisers Hyderabad has been in disastrous form and would be going under significant changes for the next season.

The temperatures will be in the mid-thirties, and the weather will be mostly hot.

The pitch has improved for batting since the last match as it was a high-scoring game. The teams chasing have won most of the matches as bowling becomes challenging in the second half because of the dew factor.

Virat Kohli needs to improve his strike rate in the remaining matches. He scored 25 runs in the last game. Virat Kohli is very good Captaincy choice in BLR vs SRH Dream11 Team.

Maxwell has now hit three half-centuries consecutively this season. He did not get a chance to bowl in the last match.

He, too, has been slow in his approach as he scored 40 runs from 38 balls in the last match.

Harshal Patel has picked up the highest number of wickets this season. He went wicketless in the last match.

Chahal has appeared to be completely different in the second half of IPL. He picked up three wickets in the last match.

Jason Holder has been brilliant with the ball this season. He picked up two wickets in the last match but scored only two runs.

Rashid Khan is the team’s leading wicket-taker and managed to pick up a wicket in the last match.

Skipper Williamson has been slow in his approach and scored 26 runs in the last match.

Roy performed well in one match so far and scored only ten runs in the previous game.

He is going through a challenging phase currently and was wicketless in the last match.

ABD finally performed decently in the last match. He can be a trump card pick in RCB vs SRH Dream11 Team. If RCB bat first then he is not a bad choice.

This match is looking risky for small leagues on Dream11 so try to play only Grand Leagues.