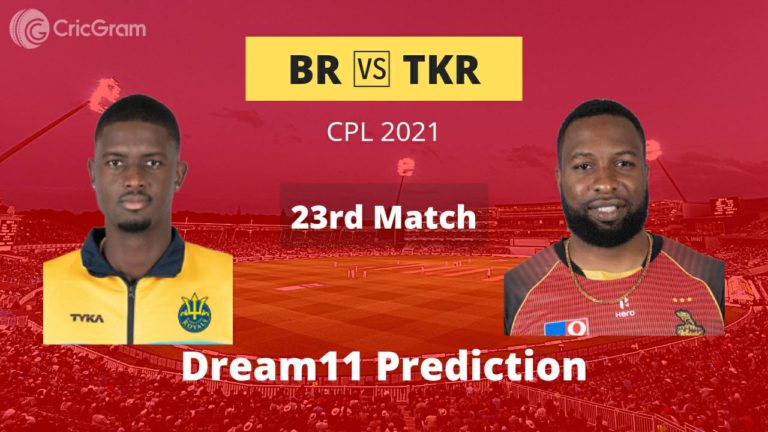 Barbados Royals vs Trinbago Knight Riders will be played in the 23rd match of CPL 2021 at Warner Park, Basseterre, St Kitts. We will cover BR vs TKR Dream11 Prediction, Playing XI, and Fantasy Cricket Tips.

Johnson Charles has opened the innings and batted well in some of the matches, but his partner Kyle Mayers has been out of form. Azam Khan and Glenn Phillips have scored some crucial runs in the middle-order. The batting unit has failed to perform in most of the matches.

Even the bowlers have not been consistent with their performance. Mohammed Amir, Nyeem Young, and Raymon Reifer have been the leading wicket-takers of the team. Jake Lintott managed to pick up two wickets in the last match. Barbados has the chance to qualify for playoffs if they manage to win the remaining games.

Knight Riders have performed well so far as they have won four out of the seven matches and are currently at the 2nd position on the points table. The bowlers performed brilliantly, and they won the last game comfortably 75 runs.

Lendl Simmons is scoring runs consistently and missed his fifty by eight runs in the last match. Munro has struggled to score runs at a reasonable strike rate. Pollard and Seifert have been providing an excellent finish to the team.

The bowlers have won most of the matches for the team. Ravi Rampaul and Sunil Narine have picked up wickets consistently. Ali Khan bowled brilliantly, picking up four wickets in the last game. TKR has almost qualified for the playoffs.

The Weather will be mostly cloudy with a slight chance of rain during the match.

The batsmen can score runs comfortably in the first innings, but it is getting challenging to chase the total as the match progresses. The teams batting first have won the recent games by defending totals around 150-160.

Jason is the captain of the team and performs equally with both bat and ball. He scored 22 runs from just seven balls and picked up one wicket in the last match.

He opens the innings for the team and has performed decently so far this season. Charles scored 40 runs from 21 runs in the last match.

He generally bats in the middle-order and is the leading run-scorer of the team. Phillips scored 44 runs from 31 balls in the last match.

Nyeem is a right-arm fast bowler and has bowled brilliantly in the few matches played this season. He picked up three wickets for just 24 runs in the last match.

He is an experienced left-arm fast bowler and swings the ball well. Amir managed to pick up a wicket in the last match.

Narine has stopped opening the innings and is batting in the lower-order. He bowled brilliantly in the last match, picking up two wickets and also a maiden over. Sunil Narine is a very Captain choice in BR vs TKR Dream11 team prediction.

Simmons is looking back in form from the last few matches. He scored 42 runs in the previous game.

He has been in exceptional form this season. Rampaul picked up two wickets in the last match.

Akeal has been consistent and economical throughout the season. He managed to pick up a wicket in the last match.

He leads the team and has been scoring runs consistently. Pollard scored 39 runs from just 18 balls.

He is a right-arm fast bowler and played his first match of the season. Ali picked up four wickets for just six runs in that match.