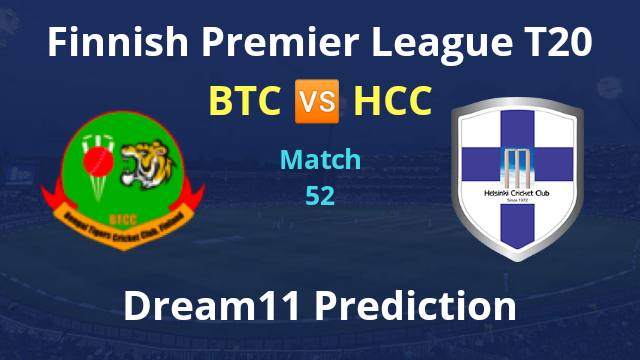 BTC is coming with a defeat on their back from their previous game in a rain-affected match. It was a humiliating loss for Tigers. And, will be eager to make their strides on the winning track. They have the likes of Muhammad Imrul Abedin, Habib Md Al Arman, who will be the leading players to score runs for their side.

On the other hand, they have some excellent bowling actions Tonmoy Kumar Saha, who is a decent batsman as well. He played a vital knock of 31 runs off 19 balls studded with one six and boundary in the previous game. BTC is currently on 5th position in the eight-team tournament. So far, they have registered four victories out of 12 games.

HCC is one of the strongest teams in the tournament, and they are in the third position with six victories. They look pretty much stagnant with all their players performing in the top-notch form in their respective departments. In the last game, they defeated HCC by a margin of 5 wickets.

In batting, they have the services of Ghulaam Abbas Butt, Abdul Ahad Qureshi and Aniketh Pushthay, who have done exceedingly well in this edition. Meanwhile, their bowling setup also looks pretty much on the mark. In the next game, they will surely rely upon their rock-solid batting line-up that can dismantle any bowling line-up.

Huda has done a brilliant job with bat and ball for his team Bengal Tiger CC. He has scored 144 runs and six wickets in this edition. Huda is going to be a great fantasy pick. Although he didn’t play in the previous game. But, chances are quite high that he will get a go in the next game.

Tonmoy Kuma is a big match-winner, who has done brilliantly in this edition of Finnish Premier League 2020. So far, he has grabbed 16 wickets and managed 143 runs with his willow.

Belayet Khan is another fantastic all-rounder in the ranks of Bengal Tiger CC, which can well contribute with bat and ball on his good days.

Shahed didn’t feature in the last match for BTC. If he gets picked by the management in the final XI, then he should not be ignored while choosing any fantasy team. He can well bat in the lower order as well as bowl some crucial overs.

He is a talented opener from BTC that has played some vital knocks in this edition. Imrul Abedin is the third leading run-scorer for his side. He will look to continue with the same against FPC.

He is an incredibly fantastic middle-order a batsman, who can win any game for BTC. He has played some excellent knocks as well. And, he might come out with a good one against Bengal Tiger CC.

He has emerged as a lethal bowler for BTC as he has taken four wickets in his two appearances. In the last game, he took a three-for against FPC.

He is one of the top-form players for HCC, who has played several match-winning knocks. Meanwhile, he is equally dangerous with the ball. So far, he has taken nine wickets and scored 175 runs.

In the last game, he played an important inning of 39 runs off 30 balls for his team. And, his form makes him a perfect player for a fantasy team.

He has been batting at his best in the middle order for Helsinki CC. If he gets going, then chances are quite high that Aniketh will undoubtedly pull off a good knock against BTC. On the other hand, he is a genuine fast bowler that can change the game on his will.

Z Kamal is currently the leading wicket-taker for HCC and can turn the phase of any game on the back of his bowling.

He didn’t play for HCC in the previous game. But, if he gets picked, then his form makes a great pick, who will have a significant scale impact on the game with his batting skills. He has scored 134 runs in 8 games for his side.

He has emerged as a vital cog in the success of HCC in this season. Adnan can take some crucial wickets with his sharp bowling skills. And, he is expected to perform well against BTC.

He has certainly gained his good form in his batting. And, it is good news for Helsinki CC. Zahidullah Kamal has managed 146 runs in 9 games for HCC.

He can leave a good impact by bowling some good overs for HCC against BTC. Akhil has worked as a catalyst for his team and helped them in taking wickets in critical situations. Also, he has the calibre in the lower order with the bat.