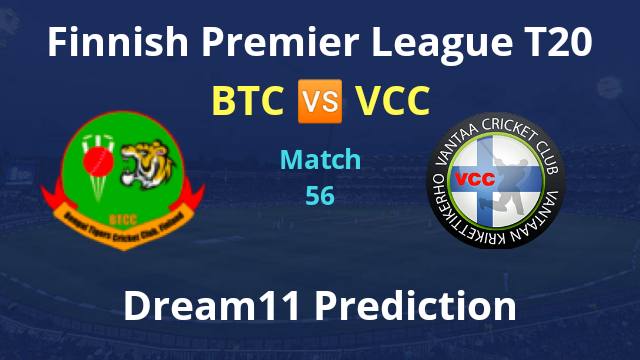 BTC loss against HCC in the last game by a margin of 24 runs. Tigers batsman poorly failed to chase down a target of 149 odd runs. Their top order could only manage 18 runs before heading towards the pavilion. It was a bad day for their side. And, in the upcoming game, they will get themselves set into grooves and will go all-out to grab a famous win.

On the other hand, their bowlers performed with discipline as they restricted the opponent at a low score. Shahed Alam took a five-wicket haul in the previous game. Muhammad Nurul Huda took two-wickets and impressed everyone with his convincing performance in the ongoing tournament.

Vantaa CC is coming with a winning momentum as they defeated FPC by 43 runs. In that game, Ranuka Shiran Fernando scored a fantastic half-century off 36 balls studded with 6 boundaries. Also, other batsmen like Ravi Sanjeewa, Chanaka Jayasinghe and Tyronne Jayanath Premsari played vital knocks that turned the game in the hands of VCC.

Shahed emerged as an essential bowler for his team. He took a five-wicket haul while bowling in the last game for his team. Currently, he is the second leading wicket-taker for BTC with 11 wickets.

Huda is a match-winning all-rounder, who has performed exceedingly well in this tournament. He should be picked in any fantasy team for the upcoming game. He has taken 8 wickets and also he is the leading run-scorer with 148 runs for BTC.

Tonmoy Kuma didn’t feature in the last game. However, he is expected to play in the next match for BTC. It is known that he is a big match-winner and performed well in this edition of Finnish Premier League. So far, he has grabbed 16 wickets and managed 143 runs with his willow.

Belayet Khan is another crucial player in the ranks of Bengal Tigers CC. He can be picked in a fantasy team as he contributes well with the bat and ball. Thus far, he has taken 10 wickets and scored 90 runs with his willow.

Imrul Abedin is a fantastic opener, who has done a great job at that position. He likes to dominate the bowlers with his submissive hitting. Moreover, Imrul has reaped success over the same in this edition. So far, he has managed 143 runs in 11 innings, and that makes him the 2nd leading run-scorer for his team.

R. Sardar is established bowler in the ranks of Tigers. He has helped his side in getting breakthrough in the crucial stages of the match due, and he has taken eight wickets in 10 games. Also, he is an abled batsman who can play quick cameo when required.

The aforementioned is quite talented middle-order batsman that can win any game for his team. He has shown some glimpses of his excellent form in this season with his willow. He has scored 126 runs in 9 innings for BTC.

Ameer has done a great job with the ball and bat for Vantaa Cricket Club in the ongoing tournament. He has scored 97 runs and taken 16 wickets. Also, he is the leading wicket-taker for VCC. He should be picked in any and every fantasy team.

He played a brilliant knock in the last game for his team. Ranuka Shiran Fernando muscled 50 off 36 balls that helped VCC in winning the game. Also, he is equally dangerous with the ball, who has grabbed 13 wickets this season.

Madura Milan is a dangerous player for any opponent as he can turn the game towards his side on the back of his brilliant batting skills and dangerous bowling. This season he has already taken 8 wickets and scored 109 runs in 12 innings.

He will be an important bowler from the perspective of Vantaa CC in the next game as he is bowling at his best at the moment. So far, he has taken 12 wickets in 11 games. Also, he can brilliantly play some swift knocks while batting.

Sanjeewa Pethahandi is a dangerous bowler, who has grabbed 13 wickets in 9 games for VCC. At the moment, he is the second leading wicket-taker for his team in this tournament.

He has scored 137 runs in 12 innings and grabbed two wickets in 12 games. He can turn out to be an excellent and match-winning pick for a fantasy team.

He is the leading run-scorer for his team, with 142 runs in 10 games. For VCC, he is undoubtedly one of the best and top form players with the bat. He cannot be ignored while picking a fantasy team.

He is a dominating batsman, who has played several match-winning knocks for VCC in Finnish Premier League 2020. Currently, he is the second leading run-scorer for his team with 175 runs in 12 innings.

The Dream11 team will be updated on our Telegram.