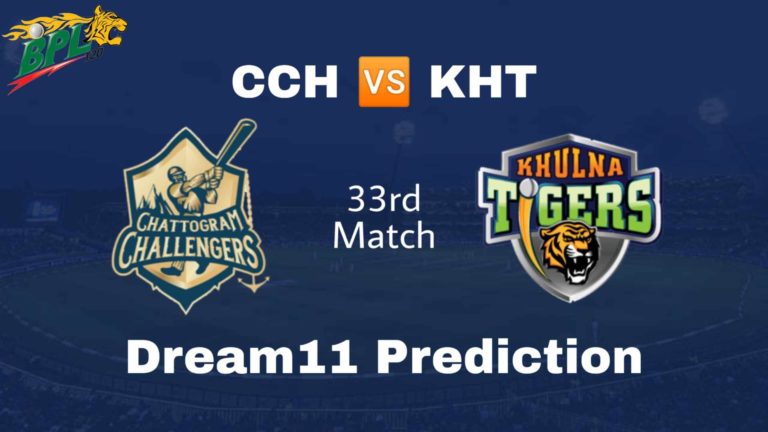 Chattogram Challengers will take on Khulna Tigers in the thirty-third encounter of Bangladesh Premier League 2019 at the Sylhet International Cricket Stadium. We will provide CCH vs KHT Dream11 Prediction, Probable Playing XI and Fantasy Cricket Tips.

They are ranked third on the points table with six wins and three losses. However, they lost their last match to Cumilla Warriors by three wickets.

Batting first, Opening duo of Simmons and Junaid Siddique played brilliant knocks of 54 and 45 runs while Zia-ur-Rehman played a late cameo of 34* runs to give a target of 160. In defense, Rubel Hossain struck twice and was supported by Burl, Mehedi Hasan Rana, and Zia-ur-Rehman but failed to restrict the Warriors and thus lost by three wickets. They will hope for a quick recovery of their key players from injury and re-gain the winning momentum tomorrow.

Tigers are just behind Challengers on the points table with five wins and three losses and will hope to cement their place in the top four teams. They lost to Dhaka Platoon by 12 runs yesterday.

Bowling first, Mohammad Amir struck twice and was supported by Frylinck and Aminul to restrict Dhaka at 172. Chasing the target, Khulna top-order collapsed cheaply and were limping on 44/4 before Skipper Mushfiqur and Najibullah built a good partnership scoring 64 and 31 respectively but were left behind by 12 runs. They will be eager to put a good show tomorrow and defeat Challengers.

A good track is likely to be on offer with an advantage to batsmen and a good total above 160 can be expected.
Spinners and Pacers can also fetch many points if they utilize their skills and conditions properly.

Chadwick Walton: He is an attacking batsman and has scored 249 runs in eight matches at an attacking strike rate.

Mehedi Hasan Rana: Pacer Rana is the leading wicket-taker of BPL’19-20 till now with 14 scalps in seven encounters. He should be a must-pick in CCH vs KHT Dream11 team.

Lendl Simmons: Experienced Simmons can be a match-winner on his day and proved in the last match scoring 54 runs from just 34 balls.

Ryan Burl: Spin all-rounder Burl can outperform with the bat as well as the ball. He can be a good choice of captain in grand leagues.

Rubel Hossain: He is a lethal pacer and has performed well taking ten scalps including two wicket-haul in the last match.

Imrul Kayes: Kayes is in good touch in this season with 289 runs in eight encounters including 54* runs in the last match he played. He can play tomorrow.

Liam Plunkett: This English Pacer has plenty of variations and should be a part of your fantasy team if he plays tomorrow. His recent form is poor.

Zia-ur-Rehman: Afghan all-rounder scored 34* runs and took one scalp in his first match of BPL and is a talented youngster.

Mushfiqur Rahim: Skipper Rahim is one of the most consistent players in Bangladesh and will be the key in the middle order. He has scored 280 runs till now in six matches, including 64 runs knock yesterday.

Mehidy Hasan: He is the lead spinner for Bangladesh and can also contribute with the bat. He scored 87* runs from 62 balls in the second last match opening the innings.

Robbie Frylinck: He is a talented performer with the bat as well as ball and can be a grand league choice of a multiplier in your fantasy team. He scored 44 and 31 runs in the two matches and has also taken few scalps with the ball including two wicket-haul in the second last match.

Rilee Rossouw: He has performed well in many T20 leagues and has amassed 292 runs in eight matches this season.

Najibullah Zadran: He is an attacking batsman and is in good form recently. He scored 41 and 31 runs in two matches he came to bat till now.

Mohammad Amir: Lethal pacer Amir can lay havoc on his day but is not in his best form recently. However, He struck twice yesterday.

Shahidul Islam: Pace bowler Shahidul took four and two wicket-haul in two of the last three matches and can fetch you good points in your fantasy team.

Aminul Islam: Leg-spinner Aminul was in good bowling form in India series and can also score few runs with the bat. He can be made captain in the grand league if he opens tomorrow.

Shafiul Islam: He is a wicket-taking pacer and can be a punt in your fantasy team over Amir.

If you liked Khulna Tigers versus Chattogram Challengers Dream11 Prediction, then follow us on Twitter for Dream11 Team and Fantasy Cricket Tips. You can also find us on Facebook.