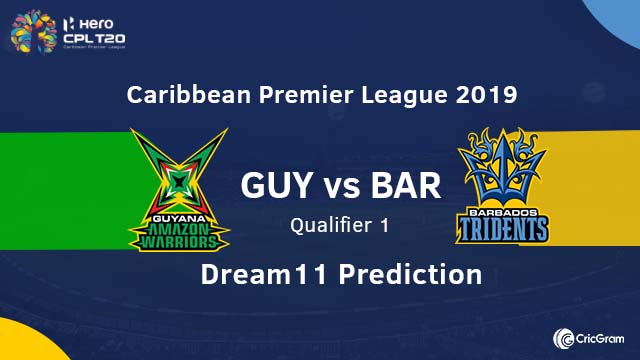 GUY vs BAR Dream11 Team Prediction, Match Preview and Probable Playing XI of the Qualifier 1 of CPL 2019. Guyana Amazon Warriors will take on the Barbados Tridents in the first qualifier T20 of Carribean Premier League 2019 at Providence Stadium in Guyana.

Table-toppers Guyana Amazon Warriors have an undefeated run in CPL 2019 winning all the ten league matches. Their batsmen, as well as bowlers, especially spinners, are performing consistently for the team and are giving a match-winning performance in every encounter.

In the last match, They defeated Trinbago Knight Riders by 7 wickets. Bowling first, Chanderpaul Hemraj bowled unbelievable spell taking three wicket-haul to restrict Riders at 143. In the chase, Brandon King gave an excellent start to the team scoring 33 runs in 23 balls. Later, Nicholas Pooran played match-winning knock of 54* runs and was supported by Shoaib Malik to continue their undefeated run ahead. With momentum on their side, Warriors will hope to become the first finalist of CPL 2019.

Barbados Tridents ended second on the points table with five wins and five losses. They have found momentum at the right time and are performing well as a team.

In the last match, They defeated Trinbago Knight Riders by 7 wickets. Bowling first, Spin duo of Shakib and Walsh, along with Gurney, took two scalps each to restrict Riders at a below-par total of 134. Chasing the target, Johnson Charles and Alex Hales scored good knocks of 55 and 33 runs to ensure a comfortable chase of the goal. They will be eager to impose tough challenge against hosts and in-form Guyana Amazon Warriors.

Pitch will be highly favorable to spin bowlers.

Pacers can find some initial support from the surface but will have to rely on variations later in the innings when the pitch gets slow down.

Try to prefer only technically strong batsmen in your team.

Batting first, generally has an advantage here as the pitch gets slow down in the second innings, making it challenging to bat freely.

Results of the eliminator a few hours before this match at this same venue can be referred to know the present conditions of the pitch.

Shoaib Malik: He has got a start in almost all the matches and can also spin the ball if needed. He scored 67* and 73* runs in two games and has also taken three scalps in the last three matches.

Shimron Hetmyer: He is an attacking batsman. He scored a quick cameo of 70, 44, and 48 runs in three matches.

Nicholas Pooran: He is in very consistent form, and scores run in almost all the matches. He scored attacking 61*and 54* runs in two games, including the last encounter.

Chris Green: Bowling all-rounder Green is a competent spinner and can pick wickets in every match for the team. He can also bat well in a tough situation for the team. He took ten scalps in the last seven games.

Imran Tahir: He is a brilliant spinner and can be lethal on slow wickets. He took thirteen scalps in seven matches, including three wicket-haul in the second last match.

Keemo Paul: He is a talented pace allrounder and scored 18* runs and took two scalps in second last encounter and can fancy his chances on slow track of Guyana.

Shakib Al Hasan: Bangladesh Skipper Shakib is one of the best spin all-rounders. He scored 38, 22, 13 runs and took four scalps in three matches. He will be a must-pick in BAR vs GUY Dream11 team.

Shai Hope (If plays): The wicket-keeper batsman is a technically strong batsman. If plays, He is good to pick in BAR vs GUY Dream11 Team.

Jason Holder: Skipper Holder is an attacking batsman and can take wickets in a crucial situation for the team. He took two wickets each in four matches but has failed to perform with the bat.

Hayden Walsh: Canadian Spin all-rounder Walsh is in good form recently and has taken seventeen scalps in six matches, including five, four, and two wicket-haul in the last three games.

Raymon Reifer: He is a good pace all-rounder and scored 26 and 34 runs in two matches and also took six scalps in the last five games. He can be a good pick in your fantasy team.

Harry Gurney: He is a wicket-taking pace bowler and has a brilliant variation of slow balls. His recent form in T20 Blast was also excellent and took seven scalps in the last three matches.

Alex Hales: T20I specialist opener Hales can play big knock on his day. His form in the T20 blast was good but has failed to replicate it in CPL 2019. However, He scored 33 runs in the last match.

Captain and Vc choices for BAR vs GUY Dream11 Team

If you liked Barbados Tridents vs Guyana Amazon Warriors Dream11 Prediction, then follow us on Twitter for Dream11 Team and Fantasy Cricket Tips. You can also find us on Facebook.