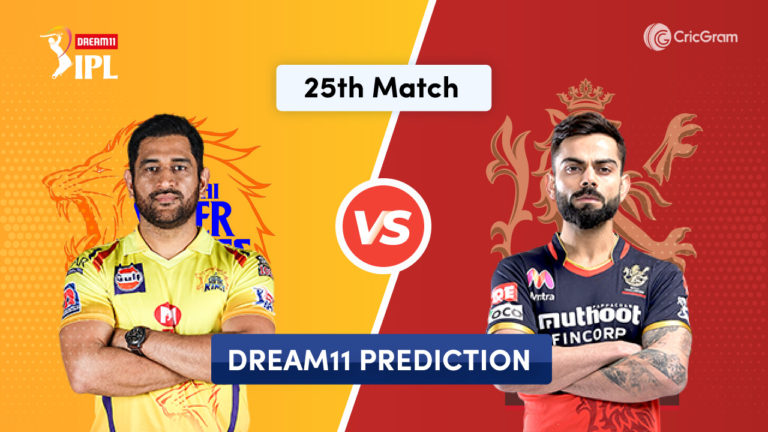 CSK struggles a lot in this season as they are currently at the 6th position on the points table with 2 wins and 4 losses, and 4 points.

Shane Watson looks back in form with two back to back fifties, and Faf du Plessis has also been scoring runs consistently, and at NO.3 Rayudu has also been performing decently. Their top-order looks pretty strong.

The main problem for Super Kings lies in the middle order as Kedar Jadhav and Dhoni are struggling to score runs and increasing the pressure on other players.

Shardul Thakur has performed brilliantly so far, picking up essential wickets in every match. Still, on the other hand, Deepak Chahar struggles to pick up wickets in powerplay and leak many runs.

Sam Curran has been putting up an all-round performance as he has been picking up wickets and also scoring runs when required. Jadeja and Dwayne Bravo have also performed their roles very well, and Karn Sharma impressed everyone with his bowling in the last match.

RCB has outstanding players, but in some matches, they were just outplayed by the opposition because they failed to perform as a team. They are currently at the 5th position on the points table with 3 wins and 2 losses and 6 points.

With the inclusion of Padikkal and Finch in the team and Virat Kohli batting at NO.3, their top order looks strong and impenetrable. Moreover, Royal Challengers have won all the matches in which their top-order has performed well.

Their middle-order appears to be a little weak, with de Villiers being the only experienced batsman. Dube and Sundar have played few good knocks, but they had come only in losing causes. With Chris Morris being fit for this match against CSK, they might get a better batting depth and an extra bowler.

Saini has been bowling at a good pace but has been expensive in a couple of matches and Udana, but he has managed to pick up wickets. Yuzvendar Chahal and Mohammad Siraj appear to be in good form, and if they both perform well for RCB, they can easily win the match.

Average 1st Innings Score: 181 (From 10 games played at this venue so far in this season)

Average 2nd Innings Score: 150 (From 10 matches played at this venue so far in this season)

Anything over 160 in the 1st innings can be considered to be a fighting total. Total 10 matches played here so far in Dream11 IPL 2020. The team batting first has won 9 games, out of which super overs decided two games.

He is a right-handed batsman and an excellent striker of the ball. Faf has been opening from the past few matches and scored 17 runs in the last match.

Shane Watson is a dangerous player for any opponent as he can turn the game towards his side on the back of his brilliant batting skills. He batted decently, scoring 50 runs from 40 balls in the last match.

He is a decent striker of the ball and plays according to the situation of the match. Rayudu scored 30 runs from 27 balls in the last match.

He is one of the top allrounders in India. R Jadeja can hit some big sixes down the order and pick up a few wickets with his spin bowling. He scored 21* runs from 8 balls but did not get to bowl in the last match.

He is death over specialist. Bravo bowled well in the last match, picking up 3 wickets. Dwayne Bravo is very good to pick in CSK vs RCB Dream11 Team

He is an allrounder and is equally good with both bat and ball. Curran scored 17 runs and also picked up 2 wickets in the last match.

He is a right-arm fast bowler and is good at controlling the flow of runs. Deepak Chahar can also be handy with the bat when required. He was very expensive and also went wicketless in the last match.

Dhoni is one of the best captains and finishers in the world. If he gets in the mood, then he can cause havoc in the death overs. Dhoni scored only 11 runs in the last match.

He is a right-arm leg-break bowler and is consistent at picking up wickets. Karn bowled brilliantly, picking up 2 wickets in the last match.

He is one of the experienced players in IPL and is a consistent wicket-taker. Chawla did not play the last match.

One of the best batsmen in the world, skipper Virat will be playing at NO.3 for RCB. He is the highest run-getter so far in the history of IPL and has five centuries to his name. Kohli scored 43 runs in the last match. He is very good Captain choice in CSK vs BLR Dream11 Team.

Finch is playing for RCB for the 1st time in IPL. He opens the innings for them and scored only 13 runs in the last match.

This 20-year-old left-handed batsman has got a lot of talent. Padikkal scored 4 runs in the last match.

Mr.360, who can play shots to any corner of the ground and will be important in the middle order. AB scored only 9 runs in the last match.

He is a right-arm leg-spin bowler. Chahal is an excellent bowler in the T20 format and troubles the batsmen with his wrong-uns. In the last match, he went wicketless.

He is a right-arm fast bowler and made his debut last season. Saini has a lot of talent and can be a good pick for RCB. He was very expensive in the last match and also went wicketless.

He is a batting allrounder and can bowl a few overs of medium pace. Dube scored 11 runs in the last match.

He is a left-arm medium-fast bowler and is mostly known for his slower deliveries. Udana was a little expensive in the last match but managed to pick up 1 wicket.

He is a right-arm fast bowler and bowls at a good pace. In the last match. Siraj bowled well, picking up 2 wickets.

He is an allrounder who is equally good with both bat and ball. Morris will play a crucial role in the lower middle order with the bat. He did not play the last match.