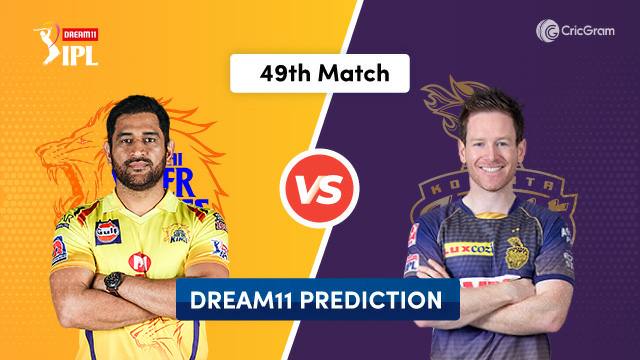 CSK are the first team to be officially out f the race for playoffs as they are currently at the bottom of the points table with four wins and eight losses, and 8 points.

After three consecutive losses, Super Kings won a match against a top side this season. They made changes again to the team and tried new players. Mitchell Santner played his first match this season, and Monu Kumar made his debut in IPL in the last game.

The youngster Ruturaj Gaikwad played brilliantly in the last match by scoring an unbeaten fifty and led his team to victory. Faf du Plessis and Rayudu have also been playing well, and scoring runs consistently this season. Jagadeesan hasn’t got many chances, but he looked like a good player by how he played in his first match.

Sam Curran has been the best find for CSK this season as he has played the role of allrounder perfectly. MS Dhoni hasn’t been able to finish the games as he had done in the earlier seasons. Another allrounder, Ravindra Jadeja, has been in great touch with the bat but has underperformed with the ball.

In the bowling department, Deepak Chahar struggled early in the season to pick up wickets, but later, he bowled very well and picked up wickets. Imran Tahir is yet to pick up a wicket as he went wicketless in the last two matches. Even though it was their first match, Santner and Monu Kumar bowled decently.

As MSD said earlier in the post-match presentation, they have nothing to lose from here, and they would be playing the remaining matches for their pride and as a part of the preparation for next season. So we can expect a good fight from the team.

Kolkata Knight Riders are in a tricky situation as they are currently at the 5th position on the points table with 6 wins and 6 losses and a total of 12 points.

Knight Riders have either played brilliantly or looked completely on the ground so far in this season. Shubman Gill has played decently and scoring runs from the top, but he does not get enough support from the other end. Nitish Rana and Rahul Tripathi, except for a couple of matches, both the players have looked out of form this season.

Another big concern for KKR is Dinesh Karthik, who has struggled a lot this season and has not performed in most of the matches. Eoin Morgan has played his role decently in the middle order and has scored a good amount of runs.

Even though Andre Russell has not done much with the bat, he is a player who can get into form in any match and score big runs for the team. But he is struggling with injury, and it’s not clear whether he will continue to play or not in other matches.

In the middle order, Sunil Narine played well recently, but he has been wicketless in the last two matches. Pat Cummins is also bowling well but has struggled to pick up wickets. Ferguson, after his first match, hasn’t appeared to be at his best.

The youngsters have also done a decent job so far in this season, and Varun Chakravarthy has been bowling well for KKR and has consistently picked up wickets in every match.

Average 1st Innings Score: 172 (From 21 games played at this venue so far in this season)

Average 2nd Innings Score: 151 (From 21 matches played at this venue so far in this season)

Anything over 160-170 in the 1st innings can be considered to be a fighting total. A total of 21 matches have been played here so far in Dream11 IPL 2020. The team batting first has won 14 games, out of which super overs decided three games.

He is a right-handed batsman and an excellent striker of the ball. Faf opened the innings for CSK and scored 25 runs in the last match.

He is an allrounder and is equally good with both bat and ball. Curran bowled brilliantly, picking up 3 wickets for just 19 runs in his 3 overs in the last match. He is very good Captain choice in CSK vs KOL Dream11 Team.

He is a decent striker of the ball and plays according to the situation of the match. Rayudu batted well, scoring 39 runs in the last game.

He is a young right-handed batsman and has been opening the innings and du Plessis from the past few matches. Ruturaj batted brilliantly, scoring 65* runs from 51 balls.

He is a right-arm fast bowler and is good at controlling the flow of runs. Deepak Chahar can also be handy with the bat when required. He bowled well, picking up 2 wickets in the last match.

He is one of the top allrounders in India. R Jadeja can hit some big sixes down the order and pick up a few wickets with his spin bowling. He went wicketless in the last match.

He is a veteran right-arm leg-break bowler and has been picking up wickets for CSK over many seasons. Tahir went wicketless in the last match.

He is a bowling allrounder and can also hit some big shots down the order. Santner played his first match this season and bowled well by picking up 1 wicket.

Dhoni is one of the best captains and finishers in the world. If he gets in the mood, then he can cause havoc in the death overs. Dhoni scored 19* runs in the last match and has looked out of form this season.

He is a young right-handed batsman and has the talent of playing big innings. S Gill opens the innings and scored 57 runs in the last match.

He is a right-arm off-spin bowler and is good at controlling the flow of runs, and consistently picks up wickets. Narine scored only 6 runs and went wicketless in the last match.

He is a left-handed batsman and a decent striker of the ball. Rana opened the innings and was out for a duck in the last match.

He is a left-handed batsman and provides stability in the middle order. In the last match, Morgan batted well, scoring 40 runs.

He is a bowling allrounder and can be handy with the bat down the order. Cummins scored only 1 run and went wicketless in the last match.

He is a right-arm fast bowler and troubles the batsmen with his pace. Ferguson batted brilliantly, scoring 24* runs, and managed to pick up one wicket in the last match.

He is a right-arm leg-break bowler and has been consistently picking up wickets. In the last match, Varun bowled decently, picking up one wicket.

He is a right-handed batsman. Tripathi played at NO.3 in the last match and scored only seven runs.

Dinesh Karthik is a right-handed batsman and generally bats in the middle order. He was out for a duck in the last match and has looked out of form this season.