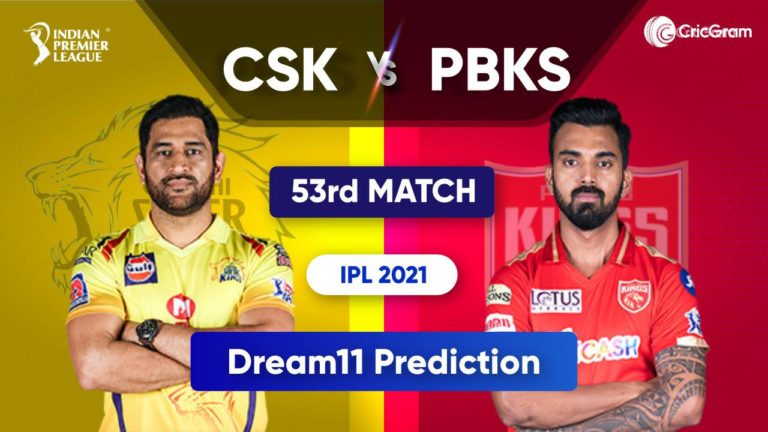 Chennai Super Kings and Punjab Kings will play in the 53rd match of IPL 2021 at Dubai International Cricket Stadium, Dubai. We will cover CSK vs PBKS Dream11 Prediction, Probable Playing 11, and Fantasy Cricket Tips of IPL 2021.

Chennai Super Kings have lost two matches in a row and dropped to 2nd position on the points table with 18 points.

One of the best opening pairs, Ruturaj and du Plessis, failed after many matches in the last game. At No.3, Uthappa played his first match of the season but did not score much. Even Moeen Ali has been silent with the bat in the recent games.

In the middle-order, Rayudu batted brilliantly scoring a fifty but Dhoni struggled to score even run a ball. The bowlers did a fantastic job and almost won the game for CSK. Shardul showed his consistency by picking up two wickets and Jadeja also managed to get two scalps. The remaining bowlers got one wicket each.

There is a chance that they might lose the 2nd spot if they get defeated against Punjab Kings.

Punjab Kings are currently in the 6th position in the IPL 2021 Standings as they have won five out of the 13 matches with 10 points.

Skipper Rahul has been one of the significant contributors with the bat this season, and Mayank Agarwal has also supported him. But the remaining batsmen have failed consistently and let down the team on many occasions. In the middle, Aiden Markram showed some consistency, and Sharukh Khan displayed his potential to be a good finisher in the future.

The bowlers were the match-winners in most of the games. The experienced bowler Shami is the leading wicket-taker of the team this season, and youngster Ravi Bishnoi and Arshdeep Singh picked up crucial wickets throughout the season. In the last match, Henriques picked up three wickets.

Punjab Kings have the slightest chance of qualifying for the playoffs if they win the match against CSK considerably.

As it is a day match, there will be a lot of heat and humidity.

The pitch has appeared to slow down in the last couple of matches as batters have struggled to score runs. The chasing team’s had an advantage this season due to the dew factor, but there won’t be many advantages as this match is in the afternoon.

Ruturaj has scored consistently this season but got out early in the last match, scoring only 13 runs. R Gaikwad is very good Captaincy choice in CSK vs PBKS Dream11 Team.

Faf has been struggling from the last couple of matches to score runs freely. He scored ten runs in the previous game.

Moeen Ali’s struggle continues as he scored only five runs and went wicketless in the last match.

Jadeja has been brilliant this season with both bat and ball. He scored 1* run in the last match but picked up two wickets for just 28 runs.

Shardul is the team’s leading wicket-taker and bowled brilliantly in the last match, picking up two wickets for just 13 runs.

Bravo has performed well with the ball this season but was expensive in the last match but managed to pick up a wicket.

KL Rahul is currently the highest run-scorer this season and scored 39 runs in the last match. He is also a very good Captain choice in CSK vs PBKS Dream11 Team.

Agarwal has been batting brilliantly and has already scored four fifties in this season.

Shami has been picking up wickets consistently and is the leading wicket-taker of the team. He picked up three wickets in the last match.

Arshdeep is a young left-arm pacer and has bowled well this season. He went wicketless and was expensive in the last match.

Bishnoi is one of the upcoming brilliant spinners. He went wicketless in the last match.

He is a batting all-rounder but bowled brilliantly in the last match, picked up three wickets, and scored 12 runs.

It is looking risky match for small leagues so try to play only Grand Leagues.