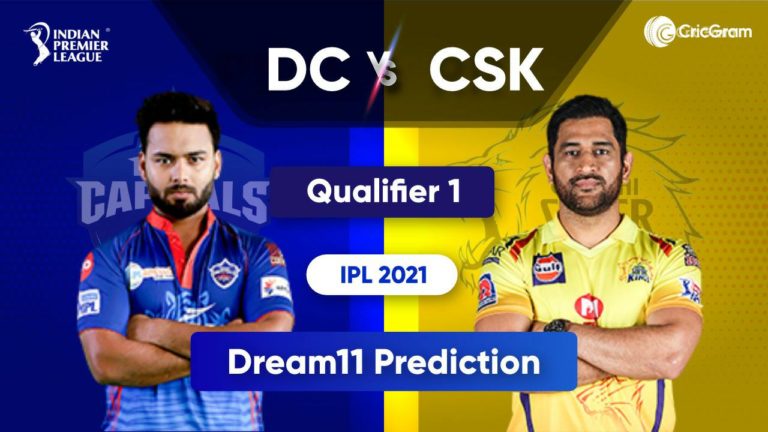 Delhi Capitals and Chennai Super Kings will play for the final spot in IPL 2021 in Qualifier 1 at Dubai International Cricket Stadium, Dubai. We will cover DC vs CSK Dream11 Prediction, Probable Playing 11, and Fantasy Cricket Tips of IPL 2021.

Delhi Capitals performed better than all other teams by winning ten matches and completed the league stage with 20 points at the top of the IPL 2021 points table.

After quite some time, both the openers, Dhawan and Shaw, performed well by scoring over forty runs each. Pant and Iyer have provided stability in the middle, but they need to play a big inning in the IPL 2021 Qualifier 1. Hetmyer has turned out to be a good finisher for Delhi Capitals.

The bowling performance appeared to be struggling after a long time in the previous game as they failed to pick up wickets. Nortje managed to pick up two wickets and Axar a wicket. The consistent performer Avesh Khan and Kagiso Rabada went wicketless.

Delhi Capitals have won two matches against CSK this season and would be hoping to repeat the same in IPL 2021 Qualifier 1.

Chennai Super Kings won nine out of the 14 matches and finished at the 2nd position on the IPL 2021 points table with 18 points.

The opener, Gaikwad appeared to be in brilliant form this season fell early in the last two matches, but du Plessis continues his form as he scored 76 runs in the previous game. At No.3, Moeen Ali and Uthappa haven’t been able to contribute recently. Rayudu and Jadeja have played some good innings in the middle-order, but Dhoni has been out of form this season.

The bowlers have done a great job this season but performed poorly in the last game. Shardul Thakur has picked up wickets consistently in every situation. Deepak Chahar managed to get a wicket.

CSK had a great run but lost three matches in a row and lost the momentum. They need to perform better in the IPL 2021 Qualifier 1.

The weather will be perfect for the game with no rain interruptions. The temperature is expected to be around 34-35 degrees celsius.

The pitch appeared to be getting slower, but in the last match, the batters performed well, and bowlers struggled to pick up wickets. It’s hard to predict how the pitch will behave in Qualifier 1, but the chasing team will have an advantage due to the dew factor.

Dhawan is back in form as he scored 43 runs from just 35 balls and is currently the third-highest run-scorer in IPL 2021. Shikhar Dhawan is very good Captaincy choice in DC vs CSK Dream11 Team.

Pant has promoted himself but scored only ten runs, and everyone expects him to play a big inning in Qualifier 1.

Shreyas Iyer has scored well in a couple of matches this season.  He scored only 18 runs in the last game.

Avesh Khan has been the most consistent bowler for DC but went wicketless in the last match. He is also a very good Captain choice in DC vs CSK Dream11 Team.

Rabada’s struggle continues as he goes wicketless in the last match and is also conceding runs.

Nortje has maintained the economy rate below six runs and is also picking up wickets consistently. He got two wickets for just 24 runs in the last match.

Moeen Ali performed well in the season’s initial matches but failed in the second leg and was out for a duck in the last game. Moeen Ali is very good pick in Delhi Capital vs Chennai Super Kings Dream11 Team.

Faf is back to playing big innings as he scored 76 runs from 55 balls and is currently the second-highest run-scorer in IPL 2021.

Ruturaj is a young-talented batsman and scored loads of runs this season but has struggled in the last couple of matches.

Lord Shardul has been giving his best, picked up three wickets in the last match, and is the team’s highest wicket-taker.

Jadeja has transformed himself into a finisher this season. He scored 15* runs but went wicketless in the last match.

Bravo has been very expensive in the last two matches and managed to pick up only a wicket.

Axar has been the key player for DC in IPL 2021 as he has picked up some crucial wickets and can score important runs if he gets to bat.

This is a risky match for Small Leagues so try to play only grand leagues on Dream11.