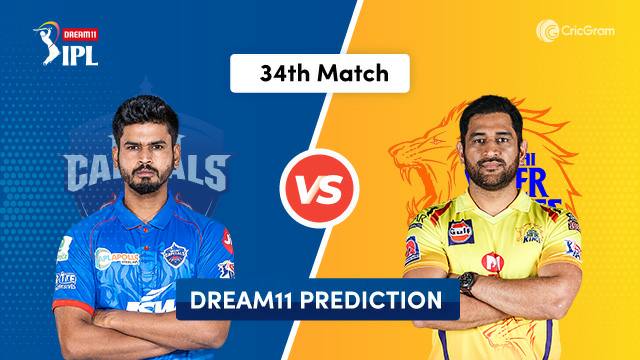 The Delhi Capitals have performed brilliantly so far as they are currently at the 1st position on the points table with 6 wins and 2 losses and a total of 12 points.

Though the Capitals are a little imbalanced with Pant’s injury and Shimron Hetmyer not playing XI, they are putting up an excellent team performance. Dhawan is looking back in the form as he scored two back to back fifties. The form of Prithvi Shaw is a little concerning as he has not been able to score runs in recent matches.

Shreyas Iyer has been doing the role of skipper brilliantly both with bat and during fielding. Ajinkya Rahane and Alex Carey are struggling to hit big shots, but they have batted decently. Stoinis and Axar have performed the role of allrounders perfectly and contributing to the team with both bat and ball.

Kagiso Rabada and Anrich Nortje have been the pillars of DC as they have been bowling at a perfect pace, and in the last match, Nortje recorded the fastest delivery in the history of IPL. Both of them have been bowling well and picking up wickets whenever required. Along with them, Ashwin has also been economical, not allowing the batsmen to score runs quickly.

CSK has struggled a lot this season, but it looked like they are finding their rhythm back in the last match. They are currently at 6th position on the points table with 3 wins and 5 losses and 6 points.

They made changes in their batting order as they scored runs at a prolonged rate in the powerplay. Sam Curran did his job very well as he scored runs quickly as an opener and gave a good start for the team.

Watson and du Plessis are looking in good touch, and if they both bat well, then Super Kings can post a big target or easily chase a target. Rayudu has been striking well, but he has appeared to be a little slow in his approach, which might be a bit of concern.

MS Dhoni batted well in the last match and hit a 102m six and looks like he is back in form. Jadeja might not have been so good with the ball this season, but he has contributed with the bat by scoring runs whenever the team was in trouble.

Bowling has been better for CSK this season as Bravo has been bowling Yorkers very well in the death overs, and Shardul Thakur is picking up important wickets. After a few bad matches, Deepak Chahar now looks back in form and is bowling well in the power play.

Spinners Karn Sharma, Jadeja, and Piyush Chawla have performed decently so far in this season. If CSK wants to qualify for playoffs, they need to continue performing as a team like the way they did in the last match.

Average 1st Innings Score: 204 (From 7 matches played at this venue so far in this season)

Average 2nd Innings Score: 177 (From 7 matches played at this venue so far in this season)

The pitch here is considered perfect for batting, and we have seen some high scoring games here. But from the past couple of matches, it has appeared that the pitch has slow down very much, and it is not that easy to score runs here.

The team winning the toss would want to bat first as the ball comes nicely on the first innings bat.

Five of the seven matches have been won by the team batting first at this venue.

Skipper Shreyas generally bats according to the situation of the match. He is capable of playing big shots also. In the last game, Iyer scored 53 runs from 43 balls.

He is a right-arm fast bowler and troubles the batsmen with his pace and bounce. Rabada bowled well in the last match, picking up 1 wicket, and is currently the leading wicket-taker in the tournament.

Shikhar Dhawan opens the innings for DC and is a good striker of the ball. He batted decently, scoring 69* runs in the last match.

He is a right-arm fast bowler and hurries the batsmen with his pace. In the last match, Nortje bowled brilliantly, picking up 2 wickets.

He is a batting allrounder and can bowl a few overs of medium pace if required. In the last match, Stoinis scored 18 runs.

He is a right-arm off-break bowler and can also be handy with the bat down the order. Ashwin managed to pick up 1 wicket in the last match.

He is a Left-arm orthodox bowler and can also hit some big shots. Axar managed to pick up 1 wicket in the last match.

He is a right-arm fast bowler and bowls at a good pace. Tushar picked up 2 wickets on his debut match.

He is a right-handed batsman and an excellent striker of the ball. Faf opened the innings for CSK and was out for a duck in the last match.

He is an allrounder and is equally good with both bat and ball. Curran opened the innings in the last match scoring 31 runs, and managed to pick up one wicket. Sam Curran is very good Captain choice in DC vs CSK Dream11 Team.

Shane Watson is a dangerous player for any opponent as he can turn the game towards his side on the back of his brilliant batting skills. He scored 42 runs in the last match.

He is a decent striker of the ball and plays according to the situation of the match. Rayudu scored 41 runs from 34 balls in the last match.

He is a right-arm fast-medium bowler and has been picking up wickets consistently this season. Thakur bowled well, picking up 1 wicket in the last match.

He is death over specialist. Bravo bowled well, picking up 2 wickets in the last match.

He is one of the top allrounders in India. R Jadeja can hit some big sixes down the order and pick up a few wickets with his spin bowling. He scored only 25 runs from 10 balls and picked up 1 wicket in the last match.

He is a right-arm fast bowler and is good at controlling the flow of runs. Deepak Chahar can also be handy with the bat when required. He bowled well but went wicketless in the last match.

He is a right-arm leg-break bowler and is consistent at picking up wickets. Karn picked up 2 wickets in the last match.

Dhoni is one of the best captains and finishers in the world. If he gets in the mood, then he can cause havoc in the death overs. Dhoni scored 21 runs from 13 balls in the last match.