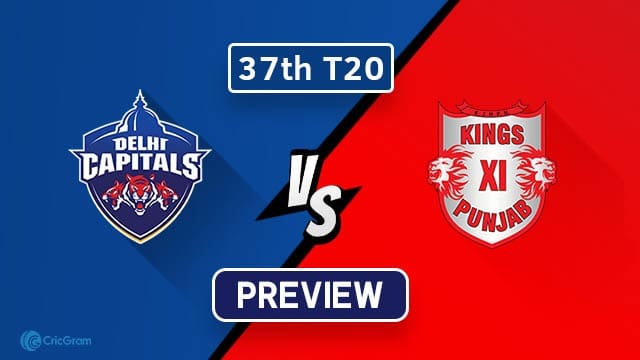 The 37th Match of Indian Premier League 2019 will be played between Delhi Capitals and Kings XI Punjab. We are covering DC vs KXIP Dream11 Team Prediction, Preview and Probable Playing XI for the T20 match. The match is to be played at Feroz Shah Kotla in Delhi.

Delhi Capitals are having a good season and are sitting on the third position in the points table with five wins and four losses. After three away victories, They lost their last home match against Mumbai Indians by 40 runs. Bowling first, Spin duo of Axar and Mishra along with Rabada bowled well to restrict MI at 168. K Rabada took two crucial scalps. Chasing the target, Shikhar Dhawan and Prithvi Shaw gave a quick start to the team with Dhawan scoring 35 runs in 22 balls but collapsed on 128 runs and were ultimately left behind by 40 runs. Delhi Capitals will want to exploit home conditions to their use and revenge for their previous loss to KXIP.

Kings XI Punjab is just behind Delhi Capitals with similar five wins and four losses. They won their last match against Rajasthan Royals by 12 runs. Batting first, Lokesh Rahul scored 52 runs and was supported by Gayle and Mayank. A 40-run knock from Miller and late cameo of 17 runs from 4 balls by Ashwin led KXIP to a good total of 182. Defending the target, Arshdeep Singh made a memorable debut taking crucial wickets of Buttler and Rahane while Ashwin and Shami also took two scalps each to ensure a 12-run win for the team. KXIP will be determined to put a similar unison effort against DC at Kotla and get another victory.

Pitch will be slow and sluggish. Dew will also play its role in second innings.

Sandeep Lamichhane will most probably replace Keemo Paul in the playing XI.

Harshal Patel is ruled out of season due to fracture and J Suchith is added as a replacement.

Colin Ingram was expected to join the team. If available, He can replace Colin Munro on slow track of Kotla.

Shikhar Dhawan and Prithvi Shaw will open the innings. Colin Munro/Ingram, Shreyas Iyer and Rishabh Pant will follow them.

C Morris and Axar Patel will play the role of an allrounder. K Rabada can also contribute with the bat.

Axar Patel and Amit Mishra will lead the spin attack along with Sandeep Lamichhane.

Kagiso Rabada, C Morris and Ishant Sharma will be the key pacers for DC.

Moises Henriques got a cap in the last match but got injured while practising. He can replace Nicholas Pooran if fit.

Mujeeb got injured fielding in the last match. If fit, He should continue on the spin-friendly track of Kotla or else Sam Curran can replace him.

Chris Gayle and KL Rahul are likely to open the innings. Mayank Agarwal and David Miller will obey middle-order duties.

Ravi Ashwin will play the role of an allrounder.

M Shami and Arshdeep Singh will be the lead the pace attack.

Ravichandran Ashwin and Murugan Ashwin will be the key spinners for KXIP.

If you liked DC vs KXIP Dream11 prediction, then follow us on Twitter for Latest Cricket News.