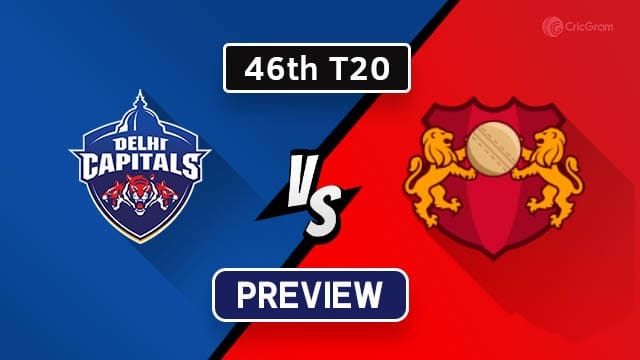 The 46th Match of Indian Premier League 2019 will be played between Delhi Capitals and Royal Challengers Bangalore. We are covering DC vs RCB Dream11 Team Prediction, Preview and Probable Playing XI for the T20 match. The match is to be played at Feroz Shah Kotla Stadium in Delhi.

Delhi Capitals are third on the points table with seven wins in eleven matches and are having a good run in IPL’19. They defeated Rajasthan Royals by 6 wickets in the last encounter. Bowling first, Delhi bowlers failed to restrict Rajasthan batsmen resulting in a target of 192 runs. Kagiso Rabada was the top performer for Delhi taking two wickets. Chasing the target, Shikhar Dhawan and Prithvi Shaw played brilliant knocks of 54 and 42 respectively with former scoring at a blistering strike rate of 200. Rishabh Pant was the star with bat scoring unbeaten knock of 78 runs in 36 balls to chase the target comfortably. Delhi will hope to continue the momentum and defeat RCB to increase their chances of qualifying in the top two teams.

Royal Challengers Bangalore have finally made an impact in IPL’19 registering three consecutive victories but are still positioned on the bottom of the points table with seven losses in eleven matches. In the last match, They defeated Kings XI Punjab by 17 runs. Batting first, Parthiv Patel gave a good start to the team scoring 43 runs in 24 balls. AB de Villiers played another brilliant knock of 82* runs in 44 balls and was supported by a good cameo of 46 runs by Stoinis to give a target of 203. Defending the target, Umesh Yadav bowled good spell taking three scalps while Navdeep Saini took two scalps to ensure a 17-run win for his team. RCB will have to win all of the remaining matches and hope other results go in their way to qualify for playoffs.

Sandeep Lamichhane will return in the playing XI considering his better record at Kotla and will replace anyone of Morris or Rutherford.

Axar Patel will play the role of an allrounder. Chris Morris or Sherfane Rutherford can also contribute with bat and ball.

Axar Patel, S Lamichhane and Amit Mishra will be the key spinners.

Purple cap holder Kagiso Rabada will be spearheading the pace attack along with Ishant Sharma.

Moeen Ali has returned to England and will not feature further in this season. Colin De Grandhomme, Hetmyer or Heinrich Klassen will replace him.

Dale Steyn is ruled out of IPL’19 due to a shoulder injury.

Virat Kohli and Parthiv Patel will open the innings. AB de Villiers and M Stoinis will follow them.

M Stoinis and W Sundar will play the role of an allrounder.

Tim Southee, Navdeep Saini and Umesh Yadav will be the key pacers along with Marcus Stoinis while Yuzi Chahal and Sundar/Negi will be the spearhead the spin attack.

If you liked DC vs RCB Dream11 prediction, then follow us on Twitter for Latest Cricket News.