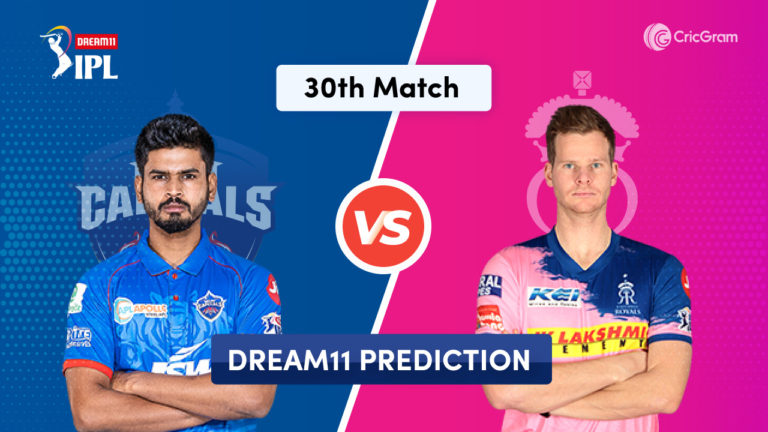 Delhi Capitals will take on Rajasthan Royals in the 30th Match of Dream11 IPL 2020 at Dubai International Stadium, Dubai. We will provide DC vs RR Dream11 Prediction, Probable Playing XI, and Dream11 Tips.

The Delhi Capitals have been performing well so far as they are currently at the 2nd position on the points table with 5 wins and 2 losses and 10 points.

The Capitals had to face disappointment in the last match as they lost to MI. Rishab Pant getting injured was a big blow for them, and Hetmyer, who was getting back in form, was rested. Prithvi Shaw is playing well but getting out playing very rash shots and has also been criticized for his fielding.

In the last match, Dhawan scored a fifty but looked very slow in his approach, which might have cost them the game as they were 15-20 runs short in their total.

Shreyas Iyer has been batting well in the middle-order and has also been leading his side brilliantly on the field. Stoinis has also been decent in his role as an allrounder. The spin duo Ashwin and Axar have been bowling well by picking up wickets and controlling the runs flow.

The current purple cap holder Kagiso Rabada and Anrich Nortje have been bowling well and building pressure on opposition players. It has been mentioned that Pant won’t be available for two more matches, which will cause a disturbance to the balance in their side.

It wouldn’t be an easy task for the Capitals to beat RR, who is looking to get back on the winning track.

After losing 4 consecutive matches, Rajasthan Royals have won the last match and moved to 6th position on the points table with 3 wins and 4 losses and a total of 6 points.

Their top-order problem continues as they have failed to get a good start even with Ben Stokes opening the innings. Steven Smith once again got out early. Jos Buttler and Samson got a good start to their innings but couldn’t convert it to a big one.

The experienced batsman Uthappa has also appeared to be struggling to score runs. But the young batsman Riyan Parag and the hero for Royals Rahul Tewatia once again batted well and took the team over the finishing line.

Their bowling has also looked well with Jofra Archer and Kartik Tyagi being in a good rhythm and picking up wickets. The main problem for Royals has been their spinners, who have not been as effective as they would have wanted. Shreyas Gopal and Rahul Tewatia have failed to perform with the ball consistently.

If Rajasthan Royals want to win their remaining games and qualify for the playoffs, their top order and spinners need to perform consistently.

Average 1st Innings Score: 178 (From 12 games played at this venue so far in this season)

Average 2nd Innings Score: 150 (From 12 matches played at this venue so far in this season)

Anything over 160 in the 1st innings can be considered to be a fighting total. Total 12 matches played here so far in Dream11 IPL 2020. The team batting first has won 10 games, out of which super overs decided two games.

Skipper Shreyas generally bats according to the situation of the match. He is capable of playing big shots also. In the last game, Iyer scored 42 runs from 33 balls.

He is a right-arm fast bowler and troubles the batsmen with his pace and bounce. Rabada bowled brilliantly in the last match, picking up 2 wickets and is currently the leading wicket-taker in the tournament.

Shikhar Dhawan opens the innings for DC and is a good striker of the ball. He batted decently, scoring 69* runs in the last match.

He is the wicket-keeper batsman for DC. Rishabh Pant didn’t played in the previous match. If he plays then very good to pick in DC vs RR Dream11 Team.

This young right-handed batsman opens the innings along-side Shikhar Dhawan. Shaw is an explosive batsman and tends to play big shots right from the start. He scored only 4 runs in the last match.

He is a batting allrounder and can bowl a few overs of medium pace if required. In the last match, he performed decently, scoring 13 runs and picked up 1 wicket.

He is a right-arm fast bowler and hurries the batsmen with his pace. In the last match, Nortje bowled well but went wicketless.

He is a right-arm off-break bowler and can also be handy with the bat down the order. Ashwin managed to pick up 1 wicket in the last match.

He is a Left-arm orthodox bowler and can also hit some big shots. Axar managed to pick up 1 wicket in the last match.

He is a right-arm medium-fast bowler. Harshal was expensive in the last match and also went wicketless.

He opens the innings for the team and can play shots from the start. Buttler scored only 16 runs in the last match.

He is one of the top allrounders across the globe and has an IPL hundred to his name. Ben Stokes scored only 5 runs and went wicketless in his first match this season. He is very good Captain choice in DC vs RR Dream11 Team.

He is a right-handed batsman and bats according to the situation of the match. Steve Smith scored 5 runs in the last game.

He is a right-arm fast bowler and can be handy with the bat down the order. In the last match, Jofra bowled well by picking up a wicket.

He is an allrounder and equally good with both bat and ball. Tewatia went wicketless but batted brilliantly, scoring 45* runs from just 28 balls in the last match.

He bats in the middle order for RR and is a good striker of the ball. Samson scored only 26 runs from 25 balls in the last match.

He bats in the lower middle order for RR and is a good striker of the ball. Parag batted brilliantly, scoring 26 runs from 25 balls in the last match.