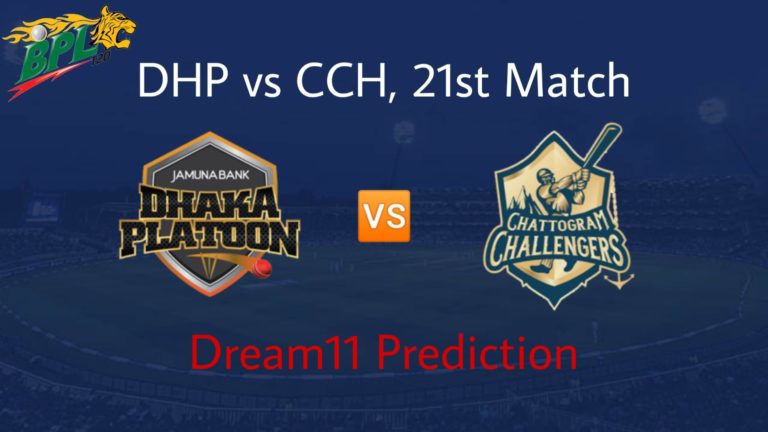 They Are third on the points table with four wins and two losses. They are performing well as a team and won their last match against Sylhet Thunder comprehensively by eight wickets.

Bowling first, Spin trio of Afridi-Shadab-Mahedi bowled well to restrict Thunder at 174 with Afridi taking two scalps. In the chase, Tamim Iqbal and Anamul Haque gave an excellent start to the team scoring 60* and 32 runs, respectively while Mahedi Hasan was at his attacking best scoring 56 runs from just 28 balls to ensure easy chase of the target. They will hope to put a similar unison effort against Chattogram tomorrow at Dhaka.

Table-toppers Chattogram Challengers have won five of their seven matches till now. However, Their four-match winning streak came to an end in the last game after getting defeated by Rangpur Riders.

Batting first, Avishka Fernando was the sole performer with the bat scoring 72 runs off 40 balls to take the team to an average total of 163. Later with the ball, Rubel struck twice while Mehedi Hasan Rana and Nasum Ahmed also bowled well but was not enough to prevent Riders from a comfortable chase. They will be eager to regain the momentum by defeating Dhaka Platoons.

A fresh track is likely to be offered with excellent support to batsmen as well as bowlers. A total near 160-170 can be expected.

Tamim Iqbal: Star opener Tamim played a match-winning knock of 60* runs in the last match and will be a must-pick in your fantasy team.

Mahedi Hasan: All-rounder Hasan has been tremendous at the top-scoring attacking fifties in the last two matches and is also a consistent performer with the ball. He can be the right choice of captain or vice-captain in CCH vs DHP Dream11 Team.

Thisara Perera: He is an experienced all-rounder and played attacking knocks of 42, 22, and 47 runs in his last three matches along with a five-wicket haul. He can play tomorrow.

Shahid Afridi: Veteran Afridi still has enough firepower to outperform with bat or ball. He struck twice in the last match.

Wahab Riaz: He can be lethal with his pace and can lay havoc on his day. He is also a brilliant finisher.

Shadab Khan: Spinner Shadab can fetch you enough points in your Dream11 team with his all-round skills. However, His recent form is not good.

Anamul Haque: Opener Anamul is a hit-or-miss type batsman. He scored 62 runs in the fourth last match and 32 runs in the previous game.

Avishka Fernando: Opener Fernando is an attacking performer and has been in good form in the international arena. He has scored 221 runs in six matches, including 72 runs in the last game.

Lendl Simmons: Experienced Simmons can be a match-winner on his day but has failed to perform till now and got out on a duck in the last match.

Imrul Kayes: Skipper is in the right touch in this season, with 235 runs in seven encounters at an average of 39.17.

Mehedi Hasan Rana: Pacer Rana is the leading wicket-taker of BPL’19-20 till now, with 13 scalps in five encounters at an average below 10. He should be a must-pick in CCH vs DHP Dream11 team.

Rubel Hossain: He is a lethal pacer and has performed well, taking eight scalps, including two wicket-haul in the last match.

Chadwick Walton: He is an attacking batsman but is batting way down the order. He can be a good punt in the grand league team.

Nasir Hossain: Spin all-rounder Nasir has plenty of skills to perform with bat or ball but has failed to put a reasonable effort from past few matches.

Kesrick Williams: He is a wicket-taking pacer and can get a chance in the XI tomorrow.

If you liked Chattogram Challengers versus Dhaka Platoon Dream11 Prediction, then follow us on Twitter for the Latest News and Playing XI. You can also find us on Facebook.