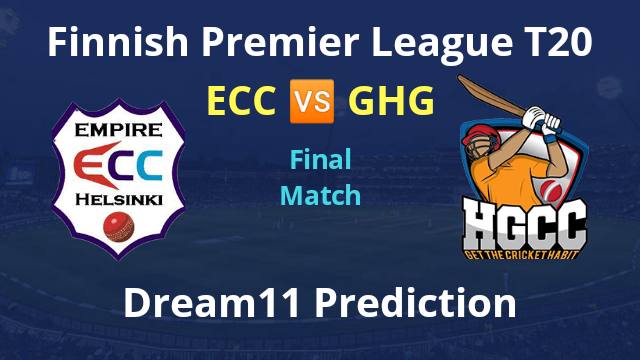 ECC has done an exceedingly great job in this edition of the tournament. They have won 10 games out of their four outings and successfully reached into this tournament’s finals. They managed a fantastic victory in the qualifier game against SKK Stadin ja Keravan Kriketti by 31 runs.

Shoaib Tahir Qureshi and Amjad Sher scored a match-winning fifties in an important game. Later on, their bowlers, performed at their best with Mahesh Tambe, and Amjad Sher took two-two wickets each. And ECC will try to put the last nail into the coffin to lift the trophy.

GHG ended on 4th position in the league table with six victories in 14 games in the ongoing T20 tournament. They defeated SKK in the qualifier 2 by 7 wickets. They will be dependent on their strong and in-form batting line up that will be lead by Saif ur Rehman, Arslan Gondal, and Pankaj Saharan from the batting top-order.

GHG has a strong bowling unit with some big names, who have done an impressive job with the ball. Like Muhammad Ghawas, Bilal Masud, and Pankaj Saharan. They also have some big match-winning allrounders like Faisal Shahzad and Pankaj Saharan, who will have to give one big short performance with the bat and ball.

Amjad is an extremely talented allrounder, who has won several games for Empire CC. In this edition, he has emerged as one of the biggest positive things for his team. He has scored 275 runs that make him the second leading run-scorer for his team, followed by his 24 wickets.

Tambe is a match-winning allrounder, who has given many matches winning performances in this season. So far, he has grabbed 27 wickets in 15 games. Also, he has scored 221 runs that make him an important pick for any fantasy team.

Shoaib smacked a brilliant half-century in the previous game, which shows his good form with the bat. He is currently the leading run-scorer for his team, with 296 runs in 12 innings. Shoaib will be an important pick for a fantasy team.

He didn’t play in the last game. But, his form might force the management to make him play in the final. In Finnish Premier League 2020, he has taken 20 wickets from 12 games at a low economy rate.

He likes to smack the opponent bowlers from the very beginning of the game. Jonathan is a brilliant opener, who will give a match-winning performance in the final of Finnish Premier League 2020. In this season, he has managed 262 runs in 14 games.

M Imran, the right-handed fast bowler, has been taking wickets for his team in the game’s crucial situations. And, he will look to produce a breakthrough performance in the next match. Thus far, he has grabbed 13 wickets from 15 games.

A. Ghafar is a good batsman who can click cameos from lower down the order. Meanwhile, he is a very dangerous bowler who has dismissed 11 batsmen in 15 games.

He is an interesting bowler who has performed brilliantly in the past with his willow. Kushagra Bhatnagar has taken 11 wickets for ECC.

He is a diligent opener who can turn the tables from the opening position. And, he might look to hammer a good knock against GHG. So far, he has scored 133 runs off 11 games.

He is a big match-winner, who is very dangerous with the ball and bat. He comes out to bat in the middle order for GHG, and most of the time, he comes with a big contribution. Meanwhile, he is a decent bowler, who has grabbed 12 wickets in this season. He has an average of 18, with a total of 218 runs in 12 innings.

M Ghawas is the leading wicket-taker for GHG in the ongoing T20 tournament with 23 wickets in 15 games. He is a quick and unpredictable bowler expected to give one last good performance in the crucial game against ECC.

Faisal Shahzad has done a great job in every department of the game this season. He is the second leading wicket-taker from the ranks of GHG with 22 wickets after Muhammad Ghawas, who has taken 23.

Jaleel Ahmad will be a player to watch out in the final game of the tournament. He has done a great job with the ball and will try to replicate the same in the upcoming game. So far, he has taken 13 wickets from 11 games and scored 71 runs.

In the qualifier match, he scored swift knock of 79 runs off 53 balls studded with nine boundaries and two sixes. Also, he is the leading run-scorer for GHG in the ongoing tournament. And, he should be picked in any fantasy side for the final game.

He has impressed everyone with his batt and bowling performances in a very less number of games. And his team will expect the same kind of performance from him in the match against ECC.

He is a fantastic opener who tries to give an excellent start to his side on his batting skills. And, final of Finnish Premier League will be a perfect match for him to play a game-winning knock for his team. In this season, he has scored runs with an average of above 26. So far, he has muscled 161 runs in 6 innings.

Javed Jan Abdul has with disciplined line and length in this Finnish Premier League. He can play a vital role in going into the final going with his form. He has grabbed 13 wickets in this season from 13 appearances.

As of now, this match is looking risky, we will update the final dream11 team on our Telegram ⇒ JOIN NOW.