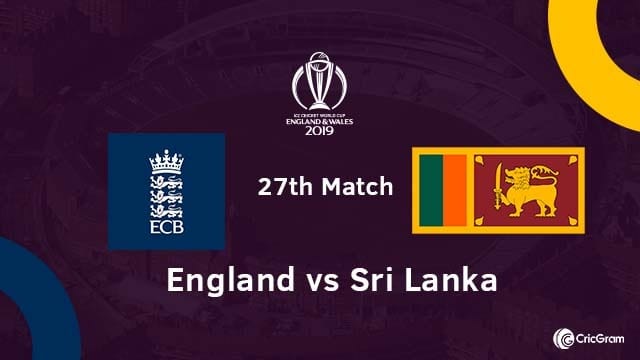 England and Sri Lanka will face-off in the 27th match of World Cup’19 at Headingley in Leeds. We will provide England vs Sri Lanka Dream11 Team Prediction, Preview and Probable Playing XI for the match.

Hosts and favourites England are in red hot form and are performing brilliantly as a team. Their four victories till now in WC’19 have come with a margin of 104 runs, 106 runs, 8 wickets, and 150 runs and only lost one match to Pakistan by 14 runs. Their top six batsmen are in super attacking form and can destroy any bowling line-up while their bowlers especially pacers have been able to outplay batsmen with their pace and bounce. They will target the top position in points table defeating Sri Lanka tomorrow.

In the last match, They defeated Afghanistan by 150 runs. Batting first, Jonny Bairstow and Joe Root played brilliant knocks of 90 and 88 respectively before Eoin Morgan went berserk scoring 148 runs in just 71 balls including 17 sixes to take the team to a total of 397. Moeen Ali also played quick cameo of 31* runs in just 9 balls. With the ball, Archer and Rashid took three scalps each while Wood took two wickets to ensure a big victory for the hosts.

Sri Lanka has failed to make a mark yet in WC’19 and is sixth on the points table with one win in five matches. Except for Dimuth Karunaratne and Kusal Perera, No other batsmen have shown any spark yet. Their bowling department has also failed to perform and is in poor form. They will expect a responsible performance from their batsmen in order to give a tough challenge to attacking the England team.

In the previous match, They lost to Australia by 87 runs. Bowling first, Isuru Udana and Dhananjaya De Silva took two scalps each to restrict Australia at 335. In the chase, Dimuth Karunaratne played outstanding knock of 97 runs and was supported by Kusal Perera who scored attacking 52 runs knock but did not get support from the middle order and were ultimately left behind by 87 runs.

Pitch will provide assistance to pacers in initial overs and then support batsmen and a good target above 350 can be expected if England bats first.

Jason Roy is injured and will not feature tomorrow. Liam Plunkett did not play the last match due to illness and can return in the playing XI on the expense of Adil Rashid. Otherwise, Unchanged playing XI can play.

Ben Stokes, Moeen Ali and Chris Woakes will play the role of an allrounder.

Moeen Ali and Adil Rashid will be the key spinners along with Joe Root while C Woakes, Mark Wood and Jofra Archer will lead the pace attack of the team along with Ben Stokes.

Suranga Lakmal was ill before the last match and can return in place of Milinda Siriwardane. Jeevan Mendis can also get a chance.

Avishka Fernando can get a chance in place of struggling Lahiru Thirimanne.

D Karunaratne will open the innings along with Kusal Perera. L Thirimanne, K Mendis, Angelo Mathews, and Dhananjaya De Silva will follow them.

Dhananjaya De Silva, Thisara Perera, and Isuru Udana will play the role of an allrounder.

Lasith Malinga and Isuru Udana will lead the pace attack along with N Pradeep and Thisara Perera while Dhananjaya De Silva will be the key spinner.

Jonny Bairstow is one of the most consistent England batsmen and has scored 0, 32, 51, 45 and 90 in five matches. He will not keep wicket-keeping duties in presence of Jos Buttler.

Kusal Perera is likely to open for Sri Lanka and plays an attacking manner. He has scores of 29, 78 and 52 in three encounters.

Jos Buttler is in attacking form and can change the course of the match in few overs. He scored 103 runs in just 76 balls against Pakistan.

Kusal Mendis has failed to perform till now in WC’19 but has the talent to play a big knock on his day. He can be the best grand league pick in ENG vs SL Dream11 team.

Joe Root is the key batsman for England and can also play spin well unlike other English players. He has scores of 51,107, 21, 100* and 88 in five encounters. He can also bowl a few overs of spin.

The skipper of Sri Lanka Dimuth Karunaratne has been the only positive for Sri Lanka along with Kusal Perera. He has scored 179 runs in three matches including 97 against Australia in the last encounter.

Skipper Eoin Morgan has performed well from past one year and is in good form. He scored 57, 9 and 35 in first three matches but was excellent in the last match playing one of the best knock of World Cup history scoring 148 runs in just 71 balls including 17 sixes.

James Vince is a talented batsman and has performed exceedingly well for Hampshire in domestic tournaments but is yet to prove his talent in the international arena. He scored 26 runs in the last encounter.

Angelo Mathews has failed miserably in WC’19 and has two duck to his name. He will be eager to fire tomorrow as he is the most experienced batsmen of the team.

Lahiru Thirimanne has scores of 4, 25 and 16 in three matches and will hope to put a good performance against quality England pace attack. He holds an outstanding ODI average of 69.60 against England including a hundred and two half-centuries.

Ben Stokes has also been in excellent form in WC’19 scoring more than 100+ runs in five matches and has also taken five scalps.

Moeen Ali can play attacking cameos with bat and can also be handy with the ball. He took three wicket-haul against Pakistan.

Dhananjaya De Silva is a technically strong batsman and can also bowl a few overs of spin. He took two scalps and scored unbeaten 16 runs in the last match.

Thisara Perera has been in poor form from the past few months and will be keen to find his form soon for the betterment of his team. He can be handy with the bat as well as ball and is the X-factor of Sri Lanka team.

Milinda Siriwardana can perform with the bat as well as a ball but is yet to prove his talent in the international circuit. He can also be risky tomorrow.

Jofra Archer is in lethal form and is troubling every batsman with his pace. He has taken four three-wicket hauls in five matches.

Chris Woakes is creating a challenge for batsmen with his swing and has taken four wickets yet. He has also performed well with the bat in limited chances.

Mark Wood bowls at a quick pace and can demolish any batting line-up on his day. He has taken nine wickets in four matches

Lasith Malinga took excellent three-wicket haul against Afghanistan and can trouble batsmen with his yorkers and slow balls. He has been ineffective in all other matches.

Leg-spinner Adil Rashid is in poor form after returning from injury but has the ability to change the course of the match. He took three-wicket haul in the last match.

Isuru Udana is death over specialist and can also play quick cameos with the bat. He failed in the first two matches but took two wickets against Australia.

Nuwan Pradeep is a hit-the-deck bowler and can be lethal in English conditions. He took four wickets against Afghanistan and can trouble batsmen with his pace and bounce.

Liam Plunkett has regained his form in WC’19 taking four scalps in three encounters. He can also be handy with the bat. He can play tomorrow.

Suranga Lakmal can also trouble batsmen with his swing in overcast conditions. He is yet to take a wicket in WC’19 and can play tomorrow.

If you liked Sri Lanka vs England Dream11 Prediction, Then follow us on Telegram for Dream11 Team and Fantasy Cricket Tips. You can also find us on Twitter.