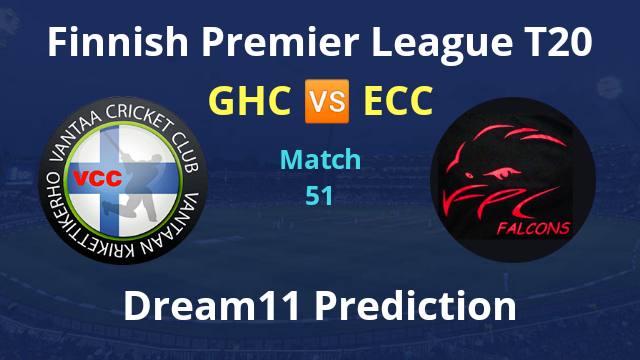 GHC registered a fantastic victory in the previous outing against VCC by three wickets. It also marks their return back on track, and they will expect to maintain this momentum going into the Finnish Premier League’s future. GHC has a squad that now looks strong and settle.

In the last outing, Sohail Amin 29 run knock rode GHCC to a convincing win. A. Attiqe and Hamzah Mukhtar also played vital knocks for their team. On the other hand, their bowling unit looks at its place, which restricted the opponent at a chasable score in the last match. H. Mukhtar all-round show with bat and ball made it quite easy for GHC to grab a win.

ECC also had a great match against SKK as they registered a victory over the latter by three wickets in a low scoring affair. For ECC’s win, all credit should be given to the brilliant and disciplined bowling of Mahesh Tambe, who took four-wicket haul against SKK.

Later on, he also played a match-winning knock of 46 runs off 39 balls studded with four boundaries that led ECC to a three-wicket victory. Now, they are ranked at second position with nine wins in 12 games in this season. Amjad Sher also took two wickets and registered bowling figures of 2/21.

The Pitch is expected to favor bowlers, and the batsmen will have a tough time batting at the venue where fast bowlers usually get an ample amount of help from the wickets.

We will update if there is any news related to any changes or injuries in the team.

He is a big match-winner who can turn the tables with his bang-on performances. Moreover, he has done a great job as an allrounder for his team.

The player above has done a brilliant job with bat and ball for GHC in this edition. And, he is expected to come out with another good show against GHC. So, he should be picked in any and every fantasy team.

He has contributed well with bat and ball for GHC. Ali has the caliber to play cameos. Meanwhile, he is quite dangerous when it comes down to his bowling.

He is performing well for GHC in almost every game. Moreover, he is quickly gaining good momentum in batting and bowling with each passing game.

S. Amin is a middle-order batsman, who has emerged as a big match-winning allrounder for his team. He has scored 72 runs and grabbed six wickets for GHC.

K. Muhammad is a talented bowler from GHC. He has displayed his excellent bowling skills in this edition of Finnish Premier League 2020. So far, he has taken nine wickets for his team.

Nazir is a number three/four batsman from the ranks of GHC. He likes to take charge against the bowlers when batting at his best. Ghulfam Nazir has shown a glimpse of his form in the recent past as well. So far, he has managed 155 runs in 10 games.

He played a vital knock of 18 runs in the last game and stitched an excellent partnership with S. Amin that led GHC to victory. Attqe will look to continue with the same in the next match as well.

In the last game, he took a four-wicket haul that helped ECC in winning the match. He will be a great fantasy pick for the upcoming game.

Amjad is an extremely talented allrounder, who has won several games for Empire CC. He can contribute with bat and ball. Moreover, he can win games for his team single-handedly, which is why he should be picked in a fantasy team.

He is currently the second leading wicket-taker for ECC in the ongoing tournament. Raaz Mohammad is a dangerous bowler who can be a great pick for the next game.

Shoaib didn’t feature in the previous game of Empire CC. But, he is in top form with bat and ball. If he plays in the next match, users should pick him in their fantasy team.

He is currently the leading run-scorer for ECC in the Finnish Premier League 2020. Scamans will look to click a swift and match-winning knock against GHC.

M Imran, the right-handed fast bowler has picked nine wickets so far this season. He has cemented his place in the team on the back of his brilliant bowling.

He can click good knocks and can bowl some crucial overs when needed. So, he can be a vital pick for a fantasy team.

He is an interesting bowler who has performed brilliantly in the past with his willow. Kushagra Bhatnagar has taken 8 wickets till now for ECC.