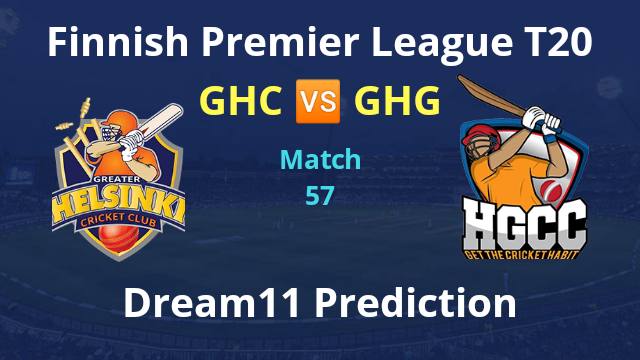 GHC is coming with a victory on their back from the previous outing. They defeated Empire CC by four wickets as their batsmen performed well in difficult batting conditions. Hamzah Mukhtar scored 40 runs off 23 balls that saved the game for GHC. Coming onto their bowlers, they did a great job and restricted opponents at a minimum score of 76 runs.

Hamzah Mukhtar took three wickets followed by Sohail Amin, Iatazaaz Hussain, and Parveen Garhwal, who took two-two wickets each. They are coming with a winning momentum and will eye to end their league stage of the tournament with a bang on victory.

GHG lost their last game to SKK by a margin of 7 wickets. In that game, they posted a total of 141 runs in stipulated 20 overs. And, later on, their bowlers failed to restrict the opponent from chasing down the target. Their bowlers looked out of touch, who had performed significantly well throughout the tournament.

Their batsmen also failed to post a competitive score on the board. However, they will have to come up with a joint effort in the last league game of the tournament before heading towards qualifiers. And, they have players who can win it for the team.

The Pitch is expected to favor bowlers, and the batsmen will have a tough time batting at the venue where fast bowlers usually get an ample amount of help from the wickets.

We will update if there is any news related to any changes or injuries in the team.

He is a match-winning all-rounder, who has grabbed 6 wickets and scored 191 runs with his willow. He is currently the second leading runs scorer and leading wicket-taker for GHC.

The is an amazing opener with dangerous bowling skills. In this season, he has muscled 292 runs in 12 innings, which makes him the leading run-scorer for GHC. Also, he has taken 9 wickets with the ball. He is a full package player, who should be picked in a fantasy team.

He is consistently contributing with the bat and ball for GHC. So far, he has managed 100 runs and dismissed 6 batsmen with the ball in this tournament.

He played an important knock of 40 runs off 23 balls in the last game. Hamzah Mukhtar is in a dazzling form that makes him a perfect pick for a fantasy side. Thus far, he has scored 133 runs in 7 innings. Moreover, he has taken 11 wickets with the ball. Also, he is the second leading wicket-taker for his side.

S. Amin has scored 114 runs and 8 wickets in Finnish Premier League 2020. He has reaped out lots of success in this edition, who has been an important part of GHC’s campaign.

K. Muhammad is an established bowler from the ranks of GHC. He has produced several match-winning performances for his team. So far, he has taken 10 wickets in 12 games.

Nazir is a talented middle-order batsman, who has worked hard and scored a bundle of runs for his team with the bat. He has scored 180 runs in 12 innings that makes him the third leading run-scorer of his team for this season.

He can play some quick knocks from the lower batting order that sometimes turns out to be the difference between winning and losing. In the final league, he will be eager to click a good one for GHC.

He is an exciting bowler from the dugout of GHC that can win games for his team. In this season, he has grabbed 5 wickets in 6 outings.

He is a top-order batsman, who has been in dashing form with the bat and ball for GHG. Pankaj is one of the best and in-form players from his team. So far, he has scored 216 runs, and he is the second leading run-scorer for GHG. Also, he has grabbed 8 wickets.

He is a dangerous bowler that is making quite difficult for the batsmen to stay at the crease. Faisal Shahzad can be picked in a fantasy team, who has taken 18 wickets and mustered 72 runs with it.

Ghawas is one of the biggest positive bowling prospects for Gym Helsinki Gymkhana. At the moment, he is the leading wicket-taker with 19 wickets in the ongoing tournament. And, he has scored 72 runs.

Jaleel Ahmad is another dangerous weapon in GHG’s bowling department, which is quite difficult to smack for boundaries and sixes. In this season, he has grabbed 13 wickets in 10 games.

Rehman is an amazing and talented opener, who is consistently scoring from the top for GHG. He has managed four half-centuries in this season and scored 321 runs at an average of above 45.

Atti ur Rehman is an important bowler turning out to be a difficult one to pick for a batsman when batting. Thus far, he has dismissed 13 wickets in 11 games.

Javed Jan Abdul has done an amazing and disciplined job while bowling in Finnish Premier League 2020 due to which he has managed to take 8 wickets for his team.

He is a big lead in the run-scoring spree of GHC, who has made some valuable contributions with the bat throughout the tournament. Brar Simranjeet has scored 122 runs in 12 games.

He sometimes comes out to bat in top order, and Shahid Irshad Gondal is an abled batsman, who has shown glimpses of his brilliant batting skills. So, he should not be ignored while picking any fantasy side.

The Dream11 team will be updated on our Telegram ⇒ JOIN NOW.