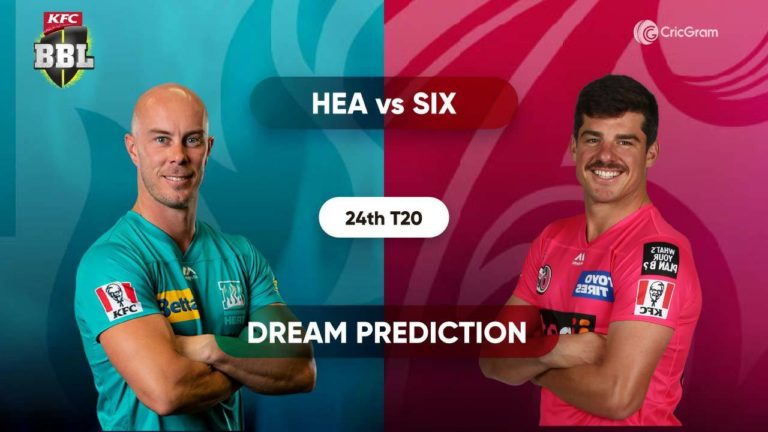 Hello and welcome to our HEA vs SIX Dream11 Prediction, Probable Playing XI, and Fantasy Cricket Tips. Brisbane Heat vs Sydney Sixers will play against each other in the 24th match of the Big Bash League 2020-21 at The Gabba, Brisbane.

Heat is having a very tough time so far this season as they have won only 1 out of 5 matches and are currently at the 7th position on the points table with 5 points. In the last game, they put up a good performance but just lost by one run.

The team’s batting department still has not been able to put up a good performance. Max Bryant has put up some decent performances this season, ut his partner Sam Heazlett has appeared out of touch. Lewis Gregory batted well in the last match.

Skipper Peirson has put up some good performances this season, and James Bazley batted brilliantly in the last match and almost ensured a victory for them but just lost the game by one run.

The bowlers did an excellent job by bowling strict lines and lengths and not allowing the opposition to score freely. The young right-arm off-break bowler, Mujeeb Ur Rahman, bowled brilliantly, picking up five wickets in the last match. Wildermuth and Steketee have been picking up wickets consistently so far in this season.

Brisbane Heat needs to find a way for winning the matches and start winning as many remaining matches as possible.

The Sydney Sixers are having a great time so far as they have won 4 out of 5 matches and are currently at the 2nd position on the points table with a total of 16 points. In the last game, Sydney Sixers performed brilliantly and won the match by two wickets.

Skipper Hughes, after some excellent performance, got out cheaply in the last match. Dan Christian and Jordan Silk have also been performing their roles in the middle-order brilliantly.

Jason Holder batted brilliantly in the last match and took the team over the finishing line.

The bowlers also have been performing well and complementing their batsmen very well. Steve O’Keefe and Ben Dwarshuis have been the most consistent bowlers in picking up wickets. Jason Holder, Gurinder Sandhu, Ben Manenti, Braithwaite had also managed to pick up wickets when it was required for the team.

Sixer would be very high on confidence after their consecutive wins, and they appear to be one of the strongest teams so far in this season.

The pitch is considered to favor fast bowlers more as it offers the perfect bounce, and the batsman can also play good shots if they can handle the pace and bounce.

Two out of the three matches have been won by the team batting first.

The weather will be partly cloudy, and there is a chance of rain during the match.

Bryant is known for his attacking cricket and will open the batting for his team. He batted brilliantly, scoring 32 runs from just 21 balls in the last match.

Denly is a highly-credentialed English batsman. He played 11 matches in BBL and scored 283 runs.

He is a young right-arm off-break bowler and has played several leagues across the globe. Mujeeb bowled exceptionally well, picking up 5 wickets for just 15 runs in his 4 overs in the last match.

He is a bowling all-rounder and can play big shots down the order. Gregory batted decently, scoring 29 runs in the last match but was very expensive with the ball and went wicketless.

He is a bowling all-rounder and is also very good at playing big shots. In the last match, he was out for a duck but bowled well and managed to pick up one wicket.

He is a right-arm fast bowler. Steketee bowled well, picking up 1 wicket in the last match.

He will open the innings with Max Bryant and will play attacking cricket in the powerplay. Sam was out for a duck in the last match and has looked out of form this season.

He is a right-arm fast bowler and bowls at a good pace. Bartlett bowled well, picking up 2 wickets in the last match.

He is an all-rounder, but he is well known for his batting. Bazley batted well, scoring 49* runs from just 31 balls in the last match.

He is an opening batsman and can also bowl a few overs if required. In the last season, he played only 5 innings and scored 64 runs.

Josh Philippe will open the innings for his side and will look to play attacking cricket in the powerplay. In the last match, he batted well, scoring 48 runs from just 30 balls. Phillipe is very good Captaincy choice in HEA vs SIX Dream11 Fantasy Cricket Team.

Skipper Hughes is a left-handed batsman and plays according to the situation of the match. In the last game, he scored only 2 runs.

He generally bats at No 3 for his team and is a player who can strike the ball very well. James Vince scored only 13 runs in the last match and has appeared to be struggling with the form this season.

Ben Dwarshuis is a brilliant bowler who can pick crucial wickets for his team in the powerplay and the death. In the last match, he went wicketless.

Dan Christian is a complete all-rounder who will bowl his four overs in the middle and death overs and do his team’s finishing duties with the bat. He scored only 8 runs but bowled very well, picking up 2 wickets in the last match.

He is a hard-hitting all-rounder who is equally god with the bat and ball. Brathwaite scored only 4 runs and was also very expensive with the ball but managed to pick up 2 wickets in the last match.

He is a left-arm orthodox bowler and is consistent at picking up wickets. Steve went wicketless in the last match.

We will update the last Dream11 team on Telegram ⇒ JOIN NOW.