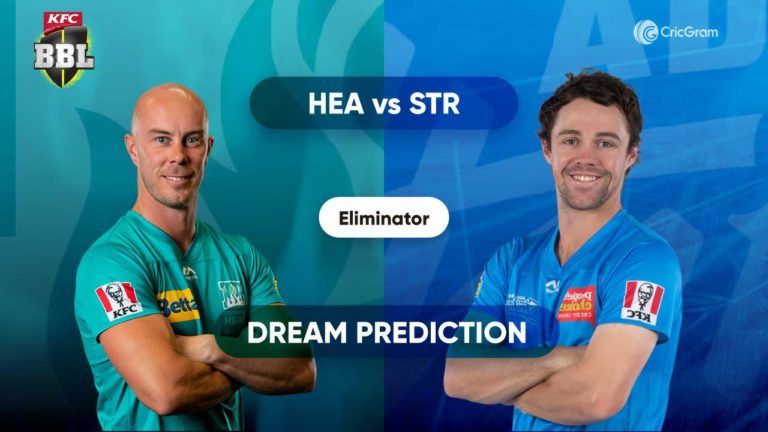 Hello and welcome to our HEA vs STR Dream11 Prediction, Probable Playing XI, and Fantasy Cricket Tips. Brisbane Heat and Adelaide Strikers will play against each other in the Eliminator of the Big Bash League 2020-21 at The Gabba, Brisbane.

The Heat managed to win 7 out of 14 matches and ended up at the 4th position on the points table and qualified for the Eliminator. They performed well in the last game, winning it by six runs.

The team’s batting department has been decent so far this season, but they have underperformed in most of the matches. Skipper Chris Lynn has been opening the innings, scoring runs consistently in every game, and has already scored five fifties in the nine games he has played this season. Max Bryant has been batting decently but has not been able to play a big inning.

At No.3 Labuschagne has been batting well and missed his fifty twice in three matches by just a few runs. Joe Denly and Joe Burns have been batting well in the middle-order, providing stability to the innings but in the last game both of them got out early, and Burns is struggling from the previous few games.

Peirson has put up some good performances this season but appeared to be struggling recently, and Lewis Gregory has also contributed with both bat and ball whenever required for the team.

The bowling department has performed well in most of the matches and is the major reason for the Heat being able to qualify for the playoffs. Mark Steketee has been the team’s consistent wicket-taker so far in this season. Bartlett has also been picking up wickets at crucial times.

Brisbane Heat needs to maintain their winning momentum and win the Eliminator against the Strikers.

Strikers have managed to win seven matches out of the 14 and finished the league stage at the 5th position on the points table and qualified for the Eliminator. They had to face disappointment in the last match as they lost by nine wickets through the DLS method.

Alex Carey and Jake Weatherald are the new batting pair of the team. After a brilliant hundred, Carey got out early in the previous game. Still, Jake Weatherald has been performing consistently in every match he has been asked to play at any position. Phil Salt has started to bat at No.3 from the last two games and has scored a decent amount of runs this season.

Skipper Tarvis Head got out early in the last match. Jon Wells has also scored a decent amount of runs, but he has looked to be a little slow in his batting approach this season and Ryan Gibbson has played a couple of good innings with the bat.

Strikers’ bowlers have been decent so far in most of the matches this season, but they performed horribly in the last game. Wes Agar has been the team’s consistent wicket-takers and is among the top five wicket-takers this season. Peter Siddle has also performed brilliantly in some of the matches this season, picking up a fifer. Daniel Worrall has also picked up some crucial wickets and managed to pick up a wicket in the last game.

Strikers need to forget their last match performance and try to give their best in the Eliminator against the Brisbane Heat.

The pitch is considered to favour fast bowlers more as it offers the perfect bounce, and the batsman can also play good shots if they can handle the pace and bounce.

The chasing team has won three out of the five matches.

The weather will be partly cloudy, and there is a slight chance of rain during the match.

Skipper Chris Lynn is one of the most destructive batsmen in the BBL. He batted well in the last match scoring 51 runs from just 25 balls and has already scored five fifties this season.

He is a right-handed batsman and a decent striker of the ball. Labuschagne scored 46 runs and picked up 3 wickets in the last match.

He is a right-arm fast bowler. Steketee was very expensive and went wicketless in the last match but is the second-highest wicket-taker so far in this season.

He is a bowling all-rounder and can play big shots down the order. Gregory batted well scoring 36 runs in the last match.

Bryant is known for his attacking cricket and generally opens the innings. Bryant scored only 3 runs in the last match.

He is a bowling all-rounder and is also very good at playing big shots. Wildermuth was run-out for 1 run and also went wicketless in the last match.

Denly is a highly-credentialed English batsman. He scored only 11 runs in the last match and is struggling for the last few matches.

He is a right-arm fast bowler and bowls at a good pace. Bartlett did not play the last match.

He is a right-arm leg-spin bowler and can trouble the batsmen with his uneven bounce. Swepson bowled well picking up 2 wickets in the last match.

He is a veteran right-arm fast bowler and bowls at a perfect pace. Morkel did not play the last match.

Carey is the wicket-keeper batsman of the team. He got out for only 2 runs in the last match.

Skipper Head is a left-handed batsman and can also bowl a few overs of spin. Head scored only 2 runs in the last match.

He is a left-handed batsman and opened the innings in the last match and scored 80* runs from 47 balls.

He is a right-arm fast bowler and consistently picks up wickets. Agar was expensive and went wicketless in the last match.

He is a veteran right-arm fast bowler and is the strike bowler for the Strikers. Siddle was expensive and went wicketless in the last match.

He is an experienced all-rounder but is well known for his bowling. Michael was expensive and went wicketless in the last match.

He is a right-arm fast bowler and bowls at a good pace. Worrall bowled well in the last match picking up a wicket.

He is one of the experienced players in the squad and generally bats in the middle-order. Wells batted decently scoring 21 runs in the last match.