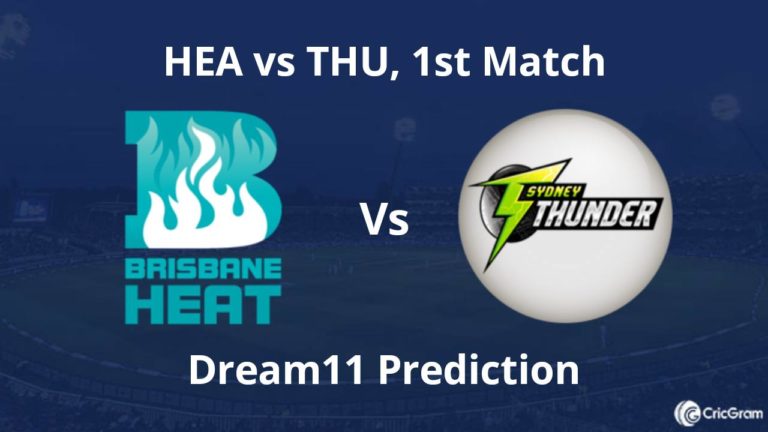 The ninth season of Big Bash League will start on 17 December 2019. In the 1st match, Brisbane Heat will take on Sydney Thunder at The Gabba in Brisbane. We will cover HEA vs THU Dream11 Prediction, Match Preview, and Probable Playing XI of the first match of Big Bash League 2019-2020.

One of the most awaited T20 leagues of the world, the Big Bash League’s 9th season is beginning on 17th December 2019. It is going to be two months of action and drama in Australia. Eight teams will compete with each other for the ultimate Big Bash title.

The 9th season is starting with the clash between Brisbane Heat and Sydney Thunder. Last season both the teams did not have a great time, and they were at 5th and 6th position respectively at the end of the season. This season both sides would be very much eager to perform well and compete for the title.

Brisbane Heat in the Big Bash league had qualified only two times in the eight seasons that they have played, and they were the champions in the 2nd season. It has been six seasons till now, and they would want to win once again the title and be the champions. With the recruitment of the world-class Batsmen AB de Villers and with the young talented Mujeeb Ur Rahman under the captaincy of Chris Lynn looks like a solid side this season. They will give a fierce competition for the other teams this time.

Sydney Thunders wasn’t that impressive in all the seasons that happened till now. They managed only once to qualify for playoffs that were in the 5th season, and they went on to win the title that year. Except for that season, their record has been pretty bad every year. But with the inclusion of one of the best all-rounders in the world Chris Morris and the world-class batsmen Alex Hales under the captaincy of Callum Ferguson they would hope they change their fortune this team and give other teams a run for their money.

The pitch generally provides pace and bounce for the fast bowlers, but if the batsmen adapt to the bounce of this pitch, they can also play big innings here.

Brisbane Heat has won all their matches played in Gabba against Sydney Thunder. So they would be very confident in this match to play in front of their home crowd and having such an excellent record. There is no forecast of rain on the match day.

They have named 13-man squad for the season opener match.

Hatcher will need to either play in the starting XI or be selected as the 12th man against due to the tournament’s rules.

Chris Lynn: Skipper Lynn is a destructive opening batsman. He scored 385 runs in the last season with four fifties in it and the highest score being 84 runs. He will be a must-pick in HEA vs THU Dream11 team.

Tom Banton: The 21-year-old wicket-keeper batsman will open alongside Chris Lynn and is a good striker of the ball. He will be playing his first Big Bash League.

Ben Cutting: He is an all-rounder who can hit some big shots down the order and bowl at a perfect pace too. He had picked up 12 wickets in the last season.

Max Bryant: He is an outstanding batsman, and he played exceptionally well for Brisbane heat last season. He scored 335 runs for the team last season.

Ben Laughlin: This pacer also bowls pretty well and can take some early wickets. He had picked up ten wickets in the last season.

Matt Renshaw: He is a very talented batsman and can also bowl 1-2 overs if required. He had scored 179 runs and picked up two wickets in the eight innings that he played last season.

Callum Ferguson: He is the opening batsman for Sydney Thunder, and he had a perfect last season. He was one of the top five run-scorers in previous seasons. He scored a total of 442 runs, which includes an innings of 113* runs.

Alex Hales: He is an opening batsman alongside Ferguson and is known for his big-hitting. Once he gets comfortable on the crease, he can smash bowlers all around the park.

Usman Khawaja: This left-handed batsman did not play much last season, but he is a very controlled and good striker of the ball. He can bat according to the situation and needs of the team.

Daniel Sams: He is a bowling all-rounder. He bowls well and picked up 15 wickets last season. Besides bowling, he can also bat and had scored a total of 175 runs.

Chris Green: He generally bats down the order and can score some handy runs and also pick some wickets. He scored 172 runs and picked up nine wickets last season.

Chris Tremain: He is a decent bowler and bowls at a good pace. He wasn’t significant last season, but he has the capability of picking up wickets.