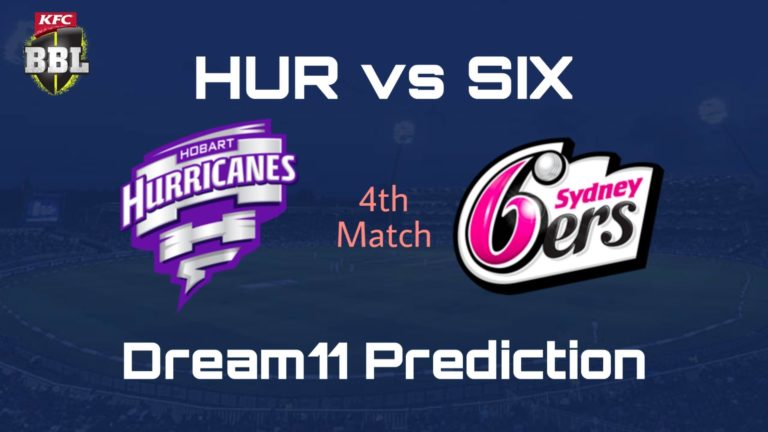 Last season Sydney Sixers performed brilliantly and finished on top of the table in the league’s stage, but they couldn’t make it to finals. In the Big Bash history, Hobart Hurricanes have performed very well in some seasons and were extremely poor in a couple of seasons.

They are yet to win a Big Bash title. They have qualified for playoffs 4 out of 8 times and have been runner up’s twice but were never able to win the title. Ben McDermott will be the Captain for Hobart Hurricanes as Mathew Wade is currently not available. The last season leading run-scorer D’Arcy Short and veteran batsmen like George Bailey and players like David Miller and James Faulkner will be crucial for Hobart Hurricanes this season.

Sydney Sixers played exceptionally well in the last match. They were brilliant in bowling as well as batting. Bowling first Sydney Sixers started picking up wickets right from the 1st over itself, and the opposition got all out for 131 runs. Tom Curran bowled good and picked up three wickets, Ben Dwarshuis, and Ben Manenti picked up 2 wickets each. Sixers were equally good in batting, but mostly it was Josh Phillipe who scored 81* runs from just 44 balls and took away the game from the opposition. They will be hoping to continue their good form against the Hobart Hurricanes and try to win this match too.

Hobart Hurricanes and Sydney Sixers have played 10 matches against each other till now, and both teams have won 5 games each.

Not many matches have been played here, and there is very little information about this ground. The only thing we can say about this pitch is that it plays a bit slow and is favorable to bowlers. There is a slight chance of rain on the match day.

D’Arcy Short:
He opened the batting for Hobart Hurricanes and was the leading run-scorer in the last edition of Big Bash. D’Arcy Short scored a total of 637 runs in 15 innings at a strike rate of 140 and 6 fifties in the previous season. He is a must pick in HUR vs SIX Dream 11 team.

Ben McDermott:
He is both skipper and wicket-keeper- batsman for Hobart Hurricanes this season. Ben McDermott generally bats according to the situation of the match. He scored a total of 376 runs last season.

George Bailey:
This veteran batsman is one of the successful batsmen in the Big Bash League. He scores run consistently and can hit some big shots too. He scored 363 runs with a strike rate of 148.77 and at an average of 45.38 in the last season.

David Miller: He is a very talented left-hand batsman and generally plays in the middle order. He plays at an excellent strike rate and also can hit some big sixes. He will be making his debut in Big Bash League this season.

Riley Meredith:
The right-arm fast bowler from Tasmania took 16 wickets in previous BBL Season. Meredith can consistently bowl at a pace above 140kph.

James Faulkner: He is a perfect all-rounder and generally bats down the order and is good at picking up wickets. He can also score some handy runs when needed. He took 18 wickets for his team in the last season.

Qais Ahmed:
He is a very talented leg-spinner from Afghanistan. He played 3 matches last season and had picked up 7 wickets.

Josh Phillippe:
He opens the innings for Sydney Sixers and is a destructive batsman. He played an excellent knock of 81* runs in the last match.

Daniel Hughes:
He is the opening batsman for Sydney Sixers alongside Josh Phillippe and is a very consistent batsman. He played a sensible knock in the last innings of 22 runs.

James Vince:
He is a very talented batsman and can play big innings for his team. In the last match, he wasn’t that good and scored just 13 runs.

Moises Henriques:
He will bat at the 4th number. Skipper Henriques is an experienced all-rounder and scored 16* runs in the end for the team.

Tom Curran:
He is a brilliant all-rounder. Tom is equally good with the bat as well as the ball. He picked up 3 wickets in the last match.

Sean Abbott:
He is the attacking pace bowler for Sydney Sixers and his wicket-taking capability in every match. He picked up one wicket in the last game.

Steve Okeefe:
This left-arm orthodox bowler is a brilliant bowler and bowls well. He had picked up one wicket in the last match.

If you liked SIX vs. HUR Dream11 Prediction, then follow us on Twitter for the Latest News and Playing XI. You can also find us on Facebook.