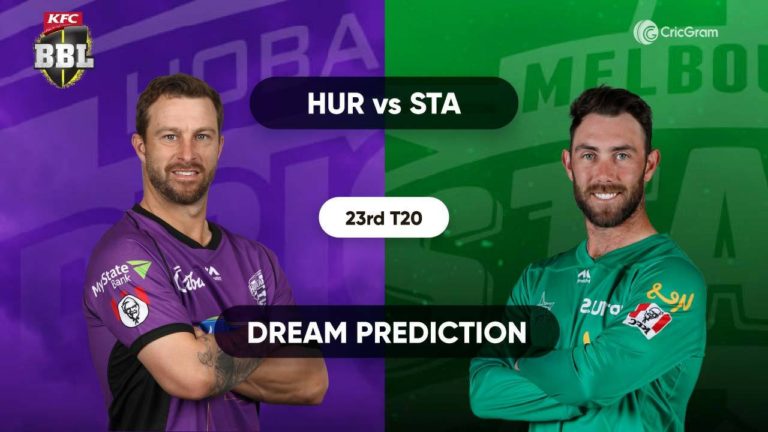 Hello and welcome to our HUR vs STA Dream11 Prediction, Probable Playing XI, and Fantasy Cricket Tips. Hobart Hurricanes vs Melbourne Stars will play against each other in the 23rd match of the Big Bash League 2020-21 at Bellerive Oval, Hobart.

The Hobart Hurricanes have performed decently so far as they have won 4 out of 6 matches and are currently at 3rd position on the points table with 15 points. Hurricanes had a thrilling victory as they won just by one run in the last match.

D’Arcy Short‘s performance has many ups and downs so far, and he failed to perform in the last match, and his partner McDermott after a couple of good knocks, failed twice in a row. The No.1 T20 batsman David Malan made his BBL debut this season and batted decently in the last match.

Skipper Handscomb has entirely been out of form this season and has not performed even in a single match. Colin Ingram and Tim David have been scoring runs in the lower middle-order and providing a decent finish for the Hurricanes in every game.

James Faulkner, who has been the consistent wicket-taker for Hurricanes, did not play the last match due to injury, but Riley Meredith has been bowling well and consistently picking up wickets. Scott Boland, Nathan Ellis, and Keemo Paul managed to pick up wickets in the last match.

Although Hurricanes have been winning matches, they still need to work on their batting performance, whereas their bowling has been right from the beginning.

The Melbourne Stars have performed decently as they have won 2 out of the five matches, and one match was abandoned due to rain. Melbourne Stars are now at the 5th position on the points table with a total of 10 points.

Stars, after a brilliant start to the tournament, have faced two back to back defeats. Opening batsman Andre Fletcher has been playing decently but has not been able to play a big inning. Stoinis has performed decently so far in this season.

Maxwell has been performing brilliantly by scoring runs quickly, but in the last match, he appeared to be a little slow with his approach. Pooran, after a fantastic performance, failed to make an impact in the previous game. Ben Dunk and Adam Zampa scored decently in the end, but that was of no use.

Stars need to improve their bowling performance as soon as possible; otherwise, they would need to face many more losses.

The Bellerive Oval pitch was a batting paradise last year and will be no different this year. As it is the start of summer in Australia, the pitches are expected to be flat. The pitch has nothing for the bowlers, but the pacers can still use their variations and be vital in the death overs.

Three out of the five matches have been won by the team batting first.

The weather will be mostly cloudy with a slight chance of rain on the match day.

He is one of the best openers in the Australian domestic circuit and performs consistently in the BBL. Short was out for a duck and also went wicketless in the last match.

He is the wicketkeeper-batsman of the team and plays according to the required situation. Ben scored only 4 runs in the last game.

He is the No.1 T20 batsman globally and has made his BBL debut this season. In the last match, Malan scored 39 runs.

He is one of the experienced players in the T20 format and has played a lot of cricket in the BBL. Ingram scored 24 runs in the last match and is currently the second-highest run-scorer this season.

He is a right-arm fast-medium bowler. Meridith bowled brilliantly, picking up 3 wickets for just 21 runs in the last match.

He is a right-arm fast bowler and one of the experienced players in the squad. Boland bowled well, picking up 2 wickets for just 18 runs in the last match.

He is a right-arm fast-medium bowler and bowls at a decent pace. Nathan managed to pick up one wicket but was expensive in the last match.

Maxwell is a batting all-rounder known for playing big shots and has a strike-rate of over 150. He can also bowl a few overs of spin if required. Maxwell scored 23 runs and went wicketless in the last match.

He is a batting all-rounder and can also bowl a few overs of medium pace. Stoinis scored 27 runs from 15 balls in the last match.

He is a left-hand batsman and is an outstanding player of T20, and can play big shots. Pooran scored only six runs in the last match.

He bats at No.3 and is a good striker of the ball. Cartwright scored only ten runs in the last match.

He is a right-arm fast bowler and bowls at a perfect pace. Hatcher was very expensive but managed to pick up a wicket in the last match.

He opens the innings along with Stoinis and can play big shots from the start of the innings. Fletcher scored only 18 runs in the last match.

He is Right Arm-fast bowler. Stanlake played 5 matches and took 5 wickets so far this season.