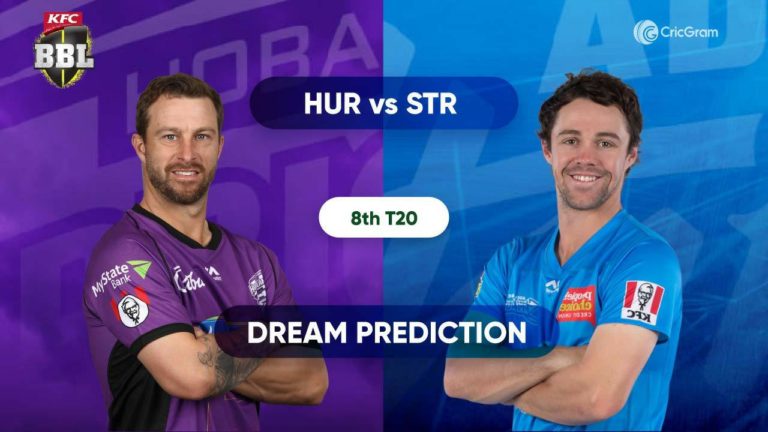 Hello and welcome to our HUR vs STR Dream11 Prediction, Probable Playing XI, and Fantasy Cricket Tips. Hobart Hurricanes and Adelaide Strikers will clash against each other in the 5th match of the Big Bash League 2020-21 at Aurora Stadium, Launceston.

The Hobart Hurricanes are having a good time currently as they have won 2 out of 2 matches and are currently at 2nd position on the points table with 2 wins and a total of 7 points.

D’Arcy Short and Will Jacks had to face disappointment in the first match, but in the last match, both of them batted brilliantly and added 63 runs to the 1st wicket. Short went on to score 72 runs and was also awarded Man of the Match.

Colin Ingram and Tim David have been batting brilliantly in the middle order, and scoring runs at a good rate. In the lower middle-order, Faulkner also played a handy inning.

In the bowling department, James Faulkner and Riley Meredith have appeared to be in great form as they have been controlling the flow of runs and also picking up wickets. Scott Boland has been expensive in both the matches and also struggled to pick up wickets. Johan Botha bowled well in the last match picking up two important wickets.

Hurricanes have some outstanding players both in the batting and bowling department, and it won’t be easy for any team to defeat them. They would want to continue their winning momentum by once again winning against the Strikers.

The Adelaide Strikers had a disappointing start to the tournament as they lost their first match and are currently at the 7th position on the points table.

In the last match, the bowlers appeared to be a little out of rhythm as they were not able to pick up wickets at regular intervals and also failed to control the flow of runs. Daniel Sams and Jonathan Cook bowled decently picking up 2 wickets. Chris Green and Nathan McAndrew were quite expensive but managed to pick up a wicket each.

The batting line-up failed in the last match as all the top, and middle-order batsmen except Mat Renshaw failed to score at least 10 runs. In the end, Daniel Worrall 62* runs from 39 balls and Danny Briggs 35* runs from 19 balls batted exceptionally well and gave the hope that Strikers might win the match.

But they couldn’t score boundaries in the last two overs, and as a result, they had to face a defeat by 11 runs. Strikers appear to be a balanced team, but they need their players to perform equally well if they want to win the matches.

The pitch here is generally considered to be good for batting and bowlers can also pick up wickets if they bowl at good line and lengths. On the whole, the pitch is equally balanced for both batsmen and bowlers.

The weather will be mostly cloudy, and there is a slight chance of rain on the match day.

He is one of the best openers in the Australian domestic circuit and always performs consistently in the BBL. Short batted brilliantly scoring 72 runs but was very expensive with the ball.

He is one of the experienced players in the T20 format and has played a lot of cricket in the BBL. Ingram batted well, scoring 25 runs in the last match.

Skipper Handscomb is the wicketkeeper-batsman of the team and generally bats in the middle-order. He scored only 4 runs in the last match.

One of the best all-rounder in BBL history with a lot of experience can be vital for his team and a player who cannot be missed in your fantasy sides. Faulkner scored 12* runs and was excellent with the ball as he picked up 3 wickets for just 21 runs.

He is a right-arm fast-medium bowler. Meridith bowled well in the last match, picking up 2 wickets for 30 runs.

He is a right-arm fast-medium bowler and bowls at a decent pace. Nathan managed to pick up a wicket in the last match.

He is an experienced all-rounder in the squad. Botha bowled well in the last match picking up 2 wickets for 20 runs.

He is a left-handed batsman and generally opens the innings for the team. In the last match, he scored only 1 run.

He is also a left-handed batsman and can also bowl a few overs of spin if required. Renshaw batted recently scoring 33 runs in the last match.

Skipper Carey is the wicket-keeper batsman of the team. He batted well in the last season scoring 391 runs in 11 innings.

He is one of the top leg-spinners globally and can also play some big shots down the order. Rashid Khan was out for a duck in the last match and picked up 1 wicket.

Siddle is a veteran right-arm fast bowler who can consistently pick up wickets. In the last match, he bowled well, picking up 1 wicket.

He is a right-arm fast bowler and consistently picks up wickets. Agar performed well in the last match, picking up 2 wickets for just 28 runs.

He is a middle-order batsman and is an excellent striker of the ball. Wells was out for a duck in the last match.

He is a right-arm fast bowler and bowls at a good pace. In the last match, Worrall batted exceptionally well scoring 62* runs from just 39 balls and also picked up a wicket.