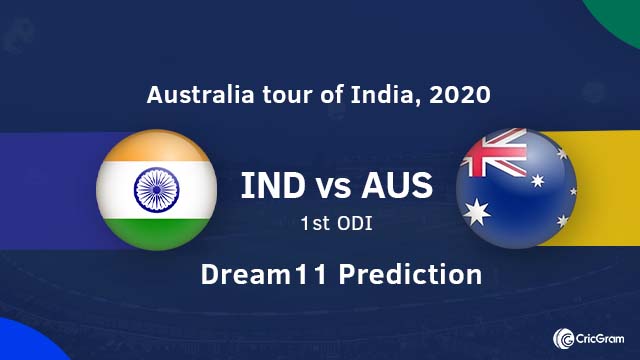 India and Australia will clash against each other in the 1st ODI of the three-match ODI series at Wankhede Stadium in Mumbai. We will provide IND vs AUS Dream11 Prediction, Probable Playing XI, and Fantasy Cricket Tips.

The Indian team is having a great time after the 2019 World Cup. They have not lost even a single Test, ODI, T20I series that they have played after the World Cup and will be very high on confidence coming into this series against one of the top contenders in the world, Australian Team. India played their last ODI series against West Indies, and it was a thrilling contest, but India performed well in all the departments and won the series. Recently they won the T20I series against Srilanka very comfortably even though the 1st match of the series was washed out.

Batting has always been good for the Indian team, but with the return of Jasprit Bumrah to the team after a short gap due to injury, Indian bowling also looks lethal this time. Navdeep Saini and Shardul Thakur have also performed well in the recent T20I series, and with the experience of Shami, there is nothing to worry about the Indian bowling. Shikhar Dhawan also returns to the ODI squad, and that would add more power to the Indian batting line up. MS Dhoni and Hardik Pandya are still not available for the selection.

Last time, Australia played an ODI was in the World Cup semi-final against England, where they had to face the disappointment as they lost the match by 8 wickets. Since then, they haven’t played ODI matches. They have played T20I and Test Series at their home and won all those series. They even retained the Ashes this time.

The Australian team also looks pretty good with players like Aaron Finch and David Warner opening the innings who can be destructive right from the 1st ball. In the middle order, they got some outstanding players like Steve Smith, Marnus Labuschagne, Ashton Turner, and Alex Carey, who are in good form, and they got one of the best bowling attacks in the world like Pat Cummins, Josh Hazlewood, Mitchell Starc and Kane Richardson. It looks like the contest between India and Australia will be a thrilling one in every match.

Last time these two teams played a bilateral series was before the World Cup, and Australia played brilliantly and defeated the Indian side by 3-2 lead. Indians will be very much eager to win this series and take revenge of their loss in the previous series.

The pitch here is considered to be very good for batting, and we can expect a high scoring match. The team winning the toss would want to bowl first because the dew factor plays a significant role in the latter half of the game.

The world No.1 Batsmen in ODI, Virat, will bat at one down and can destroy any bowling line-up if he is set and gets going. He is a player of big innings, and with his recent form in T20 and ODI series, he is a must pick in your Dream11 team.

He will open the innings for India and generally starts slow, but once he gets into the mood, then there is no stopping him, and he can hit the bowlers all around the park.

He returns to the ODI squad after a gap as he was dealing with injuries for quite a while. Dhawan has an excellent record against the Australia team and scored 100 against them in the World Cup.

He seemed to be in the right touch in the T20 series and scored a 100 against WI. Rahul can also score quick runs for the team and can also hit big shots.

He has proved himself almost every time he got a chance to bat for India, and he is an excellent hitter of the ball and can play crucial knocks when required for the team.

He is a left-arm chinaman bowler and has been picking up wickets in the recent matches, but the only concern is his economy rate. Kuldeep bowled well against WI and picked up a hattrick in the ODI series

The No.1 bowler of the 50 over format returns to the squad for the series against Australia. Bumrah looked to be back in his rhythm in the T20I series against the Srilanka.

He looked in great form in the ODI series against the West Indies and bowled at a perfect pace. Shami, along with Bumrah, will be a very lethal combination against any side.

He opens the batting for Australia and is a good striker of the ball. Warner batted well in the T20I series against Pakistan and Srilanka and also scored a good amount of runs in the Tests and is looking in great form.

He is one of the top batsmen in the world of cricket. He played brilliantly in the T20I series played at home and also performed very well in the Tests and appears to be in good nick.

He is one of the top bowlers in the Test and ODI format of the game. Cummins can bowl in any condition and bowls very tight lines and lengths. He is also a consistent wicket-taker.

He is a very lethal bowler as he can bowl consistently over 145kmph and bowls perfect yorkers. Starc bowled brilliantly in the world cup as he picked up 27 wickets, which included two 5-wicket hauls.

He is a Right-arm leg break bowler. Zampa took 65 wickets in 48 ODIs.

If you liked India vs Australia 1st ODI Dream11 Prediction, then follow us on Twitter for Dream11 Team and Fantasy Cricket Tips. You can also find us on Facebook.