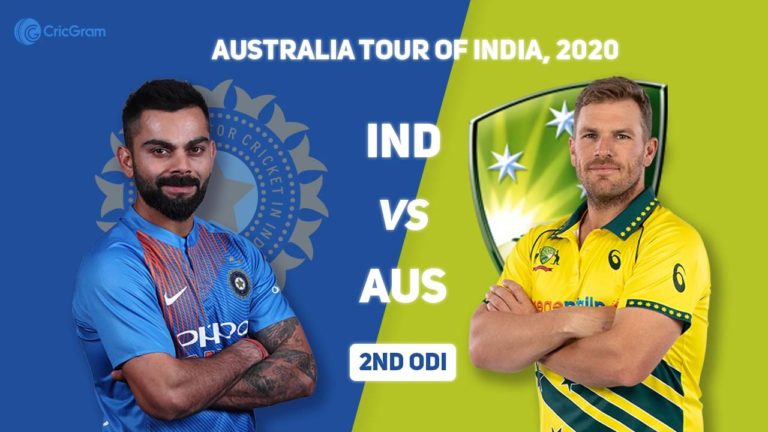 India and Australia will collide in the second ODI of the three-match ODI series at Saurashtra Cricket Association Stadium in Rajkot. We will provide IND vs AUS Dream11 Prediction, Probable Playing XI, and Fantasy Cricket Tips.

Team India was wholly thrashed by the Australians in the opening encounter losing by ten wickets.

Batting first, India could score only 255 runs against the lethal pace attack of Aussies. Shikhar Dhawan and Lokesh Rahul scored good knocks of 74 and 47 runs while the mighty duo of Rohit and Virat got out cheaply. Pant and Jadeja made some contributions in the lower middle order scoring 28 and 25, respectively. Mitch Starc took three wicket-haul while Cummins and Richardson struck twice for the team.

In the chase, Australian openers displayed utter dominance with Warner and Finch remaining unbeaten on 128* and 110* respectively to chase the target quickly in less than 38 overs. Indian pacers failed to trouble the batsmen and leaked easy runs for the Australians.

To keep the series alive, India will have to put their best effort tomorrow and bounce back comprehensively. At the same time, the Australians will want to continue the winning momentum ahead and put a similar show in the second ODI to seal the series victory against a strong Indian team at their backyard.

(In the two ODIs played at this venue)

The pitch is expected to be batting friendly, and a high scoring encounter is likely to happen tomorrow. Spinners have generally found support in the longer formats at this venue, while pacers can also fetch some wickets with their variations.

Australia has won its last four consecutive ODIs in India.

The world No.1 Batsmen in ODI, Virat, should bat at one down tomorrow and can destroy any bowling line-up if he is set and gets going. He has a better record while chasing as compared to first innings, and this strategy can act as a punt for you in the grand league team. Kohli struggles against Zampa and will be eager to make a mark tomorrow after failing in the first ODI.

He will open the innings for India and generally starts slow, but once he gets into the mood, then there is no stopping him, and he can hit the bowlers all around the park. He could score only 10 runs in the first encounter and will come on the crease with the same objective as Kohli.

He has an excellent record against the Australians and also scored 74 runs in the first ODI. He can be tried as captain in mini grand leagues.

He will bat in the middle order and will also keep the wickets. Rahul scored 47 runs in the last match.

The No.1 bowler of the 50 over format did not have a good outing in the first ODI but has the potential to lay havoc on his day.

He is in lethal form and is taking plenty of wickets. He will be a good pick in your fantasy team.

He is a left-arm chinaman bowler and has been picking up wickets for India consistently. He bowled well in the first match but was unable to take any scalp.

He is in new form presently and can make you a grand league winner as he is selected by a very less percentage of fantasy players.

Sir Jadeja will play at their home ground Rajkot tomorrow and will be eager to contribute in all the three departments of the game.

He opens the batting for Australia and is a good striker of the ball. He is in a consistent form and scored unbeaten 128* runs in the first ODI.

Skipper Finch played a match-winning knock of 110* runs in the last encounter. In the grand leagues, You can try to miss Finch as he may not be able to score big tomorrow aswell.

He is one of the top batsmen in the world of cricket. He played brilliantly in the T20I series played at home and also performed very well in the Tests and appears to be in good nick. If openers fail, He can be a key in your AUS vs IND Dream11 team.

He is one of the top bowlers in the Test and ODI format of the game. Cummins can bowl in any condition and bowls very tight lines and lengths. He is also a consistent wicket-taker and struck twice in the last match.

He is a very lethal bowler as he can bowl consistently over 145kmph and bowls perfect yorkers. Starc bowled brilliantly in the world cup as he picked up 27 wickets, which included two 5-wicket hauls. He continued a similar form taking three wicket-haul in the first ODI.

Spin all-rounder Agar is a wicket-taking option with the ball and can also contribute with the He took one scalp and even bowled a maiden in the first match.

He is a Right-arm leg break bowler and took 65 wickets in 48 ODIs. He has an excellent record against King Kohli getting the better of him six times.

He is in his best form of life. Marnus can also bowl a few overs of part-time spin.

If you liked India vs Australia 2nd ODI Dream11 Prediction, then follow Twitter for Dream11 Team and Fantasy Cricket Tips. You can also find us on Facebook