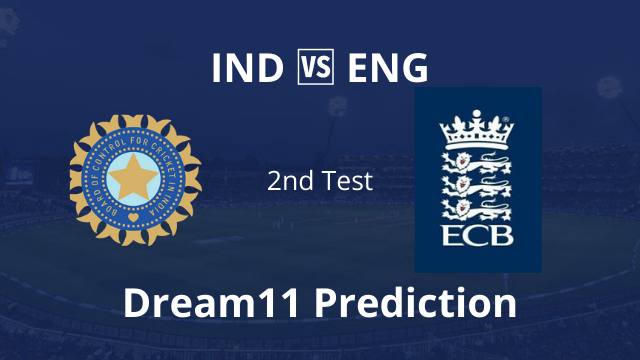 The second Test of the four-match Test series between India and England will be played at the MA Chidambaram Stadium in Chennai. We will cover IND vs ENG Dream11 Prediction and Fantasy Cricket Tips.

After a historic series win in Australia, India was expected to crush England in the four-match Test series at home. But things did not go as per the expectations and India had to face disappointment as they lost the match by a massive margin of 227 runs.

The main reason for India’sIndia’s loss was that the pitch had nothing to offer for the bowlers in the first innings and as a result, the English batsmen piled up a lot of runs and posted a substantial first-innings total.

King Kohli also batted well in the second innings and looked like he would score a hundred, but there wasn’t much support from the other end. Rahane after the hundred in the Melbourne Test has not been able to score much and has been looking out of form.

Wicket-keeper batsman Rishab Pant has been brilliant and scored the fifties in the last three test matches and was unlucky to miss his hundred in the previous game. Washington Sundar has also impressed with his batting but has not been able to up to the ball’s mark. Shahbaz Nadeem picked up wickets in the second innings but has been very expensive.

Ravichandran Ashwin struggled in the first innings as there was not much turn but bowled brilliant in the second innings picking up six wickets. Jasprit Bumrah and Ishant Sharma performed well even on a dead pitch and managed to pick up wickets. India would be very eager to get on to the field and try to win the second match as WTC final spot is at stake for India.

England continues their winning streak in Asia by winning the first match of the series, and they have won three consecutive games. Defeating India in India is a considerable achievement and England would be high on confidence after the win.

Ollie Pope was decent in his performance in the first Test. Both the spinners Jake Leach and Dom Bess bowled brilliantly and rattled through the Indian batting order and were among the significant reasons for England’sEngland’s win. Anderson bowled well in the second innings picking up some crucial wickets. Jofra Archer also bowled decently and managed to pick up some wickets.

England would want to win their winning streak by winning the second match and taking a massive lead by 2-0 in the series.

The surface of Chennai is generally considered to be spin-friendly, but that was not the case in the first Test. So the curator has been changed, and a more spin-friendly spin has been prepared for the second Test. It is expected to show the signs of turn from Day 1 itself.

We all know form is temporary, but class is permanent. So we can expect a big score from Virat Kohli very soon, and he will be precious to your Dream11 team.

On a turning track like Chidambaram Stadium, you need an experienced player, and Ashwin is one of them. He picked up nine wickets in the first Test, and he could pick up even more in the second.

He is a perfect test batsman and always scores a decent amount of runs and plays an anchor in the middle-order.

He is the wicket-keeper batsman of the Indian team and is in red hot form from the last few matches. Pant can change the course of the game by his big six hitting abilities.

He is a young right-handed batsman and generally opens the innings. Gill is not experienced but has a lot of talent and is the next big thing in Indian cricket.

He is an outstanding player of the white ball but hasn’t performed much in red-ball cricket. But he has been batting well in the last few matches, and if he gets settled, he can score a lot of runs.

He is a Right-arm fast bowler. Bumrah is very good to pick in IND vs ENG Dream11 Team.

He has been looking in great form in the recent matches, and he might score a century again in the second Test.

Stokes is the world’s best all-rounder, and he can be valuable to the team in terms of both batting and bowling.

Broad is well known for his swing bowling. He might not get much help from the pitch, but still, he is a world-class bowler and can pick up wickets under any condition.

Leach is the leading spinner of the England team. He will play a crucial role in the turning track in the 2nd Test.