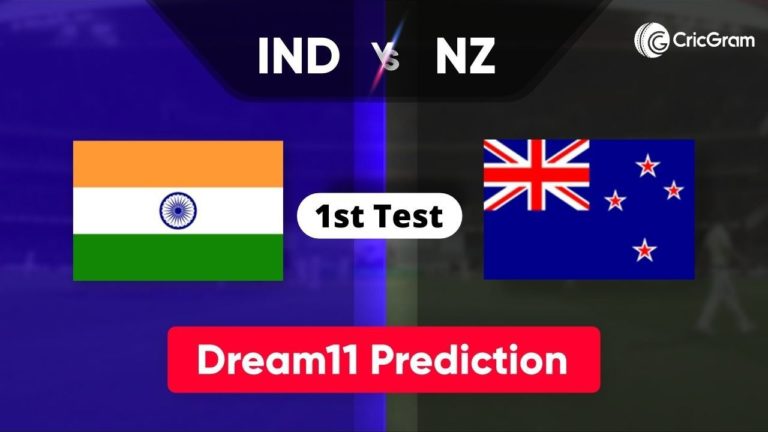 India and New Zealand will play in the 1st Test match of the New Zealand tour of India 2021 at Green Park, Kanpur. We will cover IND vs NZ Dream11 Prediction, Probable Playing 11, and Fantasy Cricket Tips.

India was clinical in the T20I series and will be high on confidence as they move into the Test series.

The middle-order batsman Ajinkya Rahane will lead the side in the first match. Mayank Agarwal and Shubman Gill are likely to open the innings. Cheteshwar Pujara and Rahane will continue at their usual position. Shreyas Iyer will debut in the first test.

The bowling attack has an equal number of spinners and fast bowlers. The spin trio Ashwin-Jadeja-Axar will be lethal on the Indian pitches. Ishant Sharma and Mohammad Siraj are likely to be the two pacers in the team.

Indian had lost the match when these two teams clashed against each other in the World Test Championship final.

New Zealand has lost all the matches in the T20I series, but they are the No.1 team in the Test format.

Tom Latham and Will Young might be the new opening pair as Devon Conway has been injured and ruled out of the Test series. Skipper Kane Williamson, experienced Ross Taylor and Henry Nicholls will bat in the middle-order.

New Zealand might also try three spinners, Mitchell Santner and Ajaz Patel, as they would be more effective on the spin-friendly tracks. Tim Southee and Kyle Jamieson/Neil Wagner might be the pace attack of the team.

New Zealand would be eager to perform well and win the Test series after whitewashed in the T20I format.

(The average score is based on twenty-two Test matches played at this venue.)

The pitch will be perfect for batting for the first two days of the match, but as the game progresses, it slows down drastically, and spinners will play a crucial role and get tough to bat. Fast bowlers might not get much help at this venue.

IND vs NZ Head to Head

Pujara is an experienced player and bats at No.3. He is a proper Test match player and has three double centuries and 18 centuries to his name.

Mayank has been very impressive in the short span of his career. He has already scored two double centuries and four centuries.

Gill is a young right-handed batsman and has played some brilliant knocks. He is yet to score a century in Test cricket.

Rahane is the captain of the team in the first match in the absence of Kohli. He has been slightly out of form in the Test format.

Axar Patel is a left-arm orthodox bowler and was brilliant in his debut series against England, picking up 27 wickets.

He is at the No.3 position in the Test Rankings for all-rounders. Jadeja picks up crucial wickets and has improved his batting a lot in recent years.

Ashwin is an experienced right-arm off-break bowler and is at the 2nd position in the ICC Test bowler rankings. He has scored five centuries so far in his career.

Ishant bowls right-arm medium-fast and picks up wickets early in the innings. He has the best figure of picking up seven wickets for 74 runs in an innings.

Latham is a left-handed batsman and opens the innings for the team. He has scored 11 centuries and one double century so far in his career.

Skipper Williamson is the No.2 batsman in the Test format. He has scored 24 centuries and four double hundreds so far in his career.

Ross Taylor is the most experienced player on the side and bats in the middle-order. He scored 19 centuries and three double hundreds.

Santner is a bowling all-rounder and has been impressive so far in his career. He has the best figure of three wickets for 53 runs in an innings and scored a hundred.

Southee is the experienced bowler in the team and can swing the ball well. He has a bowling average of 28.22 in the Test format.

Jamieson started his career recently and has already picked up almost fifty wickets and has a batting average of above 40 runs.

Trump Card picks for the IND vs NZ Dream11 Team.

Ajaz Patel is also a left-arm orthodox bowler and can be effective on Indian pitches.