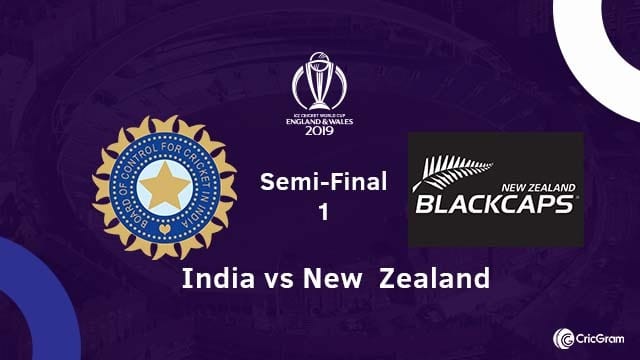 India and New Zealand will face-off in the 1st Semi-final match of World Cup’19 at Old Trafford in Manchester. We will provide IND vs NZ Dream11 Team Prediction, Preview and Probable Playing XI for the match.

Team India is one of the strong contenders for World Cup’19 and performed brilliantly in league stages ending on the top of the points table with seven wins and only one loss. India’s top-order has been in brilliant form along with Hardik Pandya and MS Dhoni while bowlers Bumrah, Shami, Jadeja and Chahal have bowled exceedingly well. They will hope to put a unison effort against Kiwis and enter the finale of WC’19.

In the previous encounter, They defeated Sri Lanka by 7 wickets. Bowling first, Jasprit Bumrah was at his lethal best taking three wicket-haul to restrict Sri Lanka at 264. In the chase, the opening duo of Rohit and Rahul scored brilliant knocks of 111 and 103 to chase the target comfortably.

New Zealand ended fourth on the points table with five wins and three losses and have lost their form lately because of poor performances from openers. Pace duo of Lockie Ferguson and Trent Boult are in lethal form while Kane Williamson and Ross Taylor have performed brilliantly with the bat along with the support of Neesham and Grandhomme in both the departments. They will hope to end their three matches losing streak and give a tough challenge to the mighty Indian team.

In the last encounter, They lost to England by 119 runs. Bowling first, Pace trio of Boult-Henry-Neesham bowled well taking two scalps each to restrict England at 305. Chasing the target, Tom Latham scored crucial fifty while Williamson and Taylor failed after getting starts and ultimately were left behind by a big margin of 119 runs.

Pitch will be supported batsmen and a good total can be expected. Spinners will also enjoy the slowness of track.

Yuzvendra Chahal is likely to return in the playing XI. While One of Ravindra Jadeja and Kuldeep Yadav will play.

Bhuvneshwar Kumar and Mohammad Shami both are in good form. It looks like that one of M Shami and Bhuvi will play.

Hardik Pandya will play the role of an allrounder.

Jasprit Bumrah and Mohammad Shami will lead the pace attack along with Hardik Pandya while Yuzvendra Chahal will handle the spin attack.

Lockie Ferguson is likely to get fit and will replace Tim Southee in the playing XI.

While anyone among Henry Nicholls or Colin Munro will play. Both are in very poor form. Chances of Nicholls are more.

Henry Nicholls/Munro and Martin Guptill will open the innings. Kane Williamson, Ross Taylor, and Tom Latham will follow them.

James Neesham, Colin de Grandhomme, and Mitchell Santner will play the role of an allrounder.

Trent Boult, Lockie Ferguson, and Matt Henry will lead the pace attack along with James Neesham and Colin de Grandhomme while Mitchell Santner will handle the spin department along with Kane Williamson.

Wicket-Keeper for IND vs NZ Dream11:

After failing in all of the matches, Tom Latham finally scored fifty against England. He also has an average of 58 against India and can be a smart pick in NZ vs IND Dream11 team.

Rishabh Pant is a talented and attacking batsman and can score quick runs in the middle order. He scored 32, 48 and 4 runs in three encounters.

Batsmen for NZ vs IND Dream11:

Henry Nicholls is a technically strong batsman and can open the innings. He scored 8 and 0 runs in two encounters.

Dinesh Karthik is an attacking finisher and chances to play tomorrow. He can handle the pressure in crucial situations.

Kedar Jadhav scored crucial 52 runs against Afghanistan. He can also chip in with a few overs if required. He has less chance to play tomorrow.

Colin Munro is also in poor form and has fewer chances to play tomorrow.

Jimmy Neesham is in brilliant form recently and proved it by taking five-wicket haul against Afghanistan. He can also play attacking cameos with bat and scored 97* runs against Pakistan. He also took two scalps against England.

Colin De Grandhomme can play attacking knock and also chip in with crucial wickets. He has taken five scalps in eight matches and also scored attacking 60 and 64 runs against South Africa and Pakistan respectively.

Ravindra Jadeja is one of the best fielders in world cricket. He is also very economical with the bowl and took one scalp against Sri Lanka. He can also be handy with bat and scored a half-century against Kiwis in Warm-up match.

Mitchell Santner is a good spin bowling all-rounder and can also hit quick runs. He generally bowls with the good economy but has failed to perform in WC’19.

Jasprit Bumrah is one of the best pacers in world cricket and is a wicket-taking bowler in initial, middle as well as death overs. He has taken seventeen scalps in eight encounters.

Trent Boult can trouble any batsmen with his swing in the initial overs. He has taken fifteen scalps in eight matches including two four wicket-hauls.

Mohammad Shami is in lethal form and has taken fifteen scalps in four encounters including two four-wicket hauls and one five wicket-haul. He will play tomorrow.

Lockie Ferguson can be lethal with his pace. He has taken seventeen scalps in seven encounters and is third on the list of top wicket-takers. He missed the last match due to a hamstring injury but is likely to be fit for tomorrow’s encounter

Yuzi Chahal has been the best spinner for India taking eleven scalps in seven matches including a four-wicket haul against South Africa. He is likely to play tomorrow.

Matt Henry has impressed everyone with his pace and swing in the initial overs and has taken ten scalps in seven encounters.

Bhuvneshwar Kumar can be lethal in initial overs with his swing and can also trick batsmen with his skills in death overs. He took one scalp each in the last two encounters. He is not in his best form and can be slightly risky.

Kuldeep Yadav can trouble batsmen with his witty spin. He has taken only six scalps till now and is not in his best form. He is unlikely to play tomorrow.

Tim Southee was lacklustre in the last match and is likely to be replaced by in-form Lockie Ferguson in the playing XI.

This team may be updated after playing XI was declared.

If you liked New Zealand vs India Dream11 Prediction, then follow us on Telegram for Dream11 Team and Fantasy Cricket Tips. You can also find us on Twitter. What are your Captain and Vice-captain choice of Dream11 Team? Comments, please.