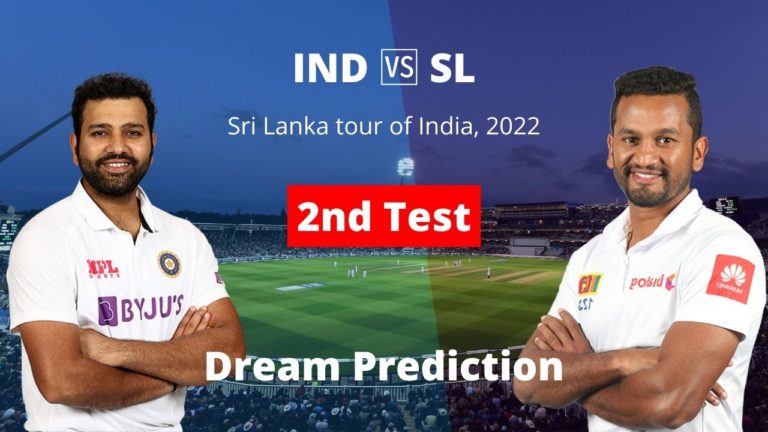 India vs Sri Lanka will play in the 2nd Test of the Sri Lanka tour of India 2022 at M. Chinnaswamy Stadium, Bengaluru. We will cover IND vs SL Dream11 Prediction, Probable Playing 11, and Fantasy Cricket Tips.

Team India completely outplayed the visitors in the first test and won by an innings and 222 runs.

Sir Ravindra Jadeja was at his best in the last game and scored 175 runs with the bat and also picked up 9 wickets with the ball.

Again all eyes will be on King Kohli’s 71st Hundred and he has good numbers in pink ball tests. Hanuma Vihari scored a well deserved fifty in the last game and will again be desperate to score runs.

A one sided contest can be expected again in Bengaluru and spinners will be the key as usual.

Sri Lanka is looking low on confidence and are unable to put up a fight against the hosts.

Their batters looked clueless in the last game and were throwing their wickets. With the ball, Lasith Embuldeniya will be their key man. Pathum Nissanka is their key batsman and looked in good touch in the last game but is ruled out for this game.

Sri Lanka will look to put up a fight and take the game as deep as possible. A draw will also be considered as a victory for them.

(The average score is based on the 23 test matches played at this venue.)

The pitch at M Chinnaswamy is expected to be very much similar to the last game but pacers will also be a key in this game under the lights. Spinners will be key once again from both the teams.

IND vs SL Head to Head

He is another must-have pick in your fantasy teams. Ashwin scored 61 runs with the bat and picked up 6 wickets with the ball. Ashwin is another brilliant pick for C and VC.

Sharma will open the innings. He has always been lethal in home games and will again be crucial. Sharma scored 33 runs in the last game and looked fluid.

The search for the century still continues and it could be Bengaluru which could do the magic for him. He scored 45 runs in the last game.

He will keep behind the stumps and bat in lower middle-order. Pant played fantastically in the last game and scored 96 runs.

Patel has some excellent numbers in home games and if the pitch is spin friendly, he will be a must-have.

Bumrah will bowl with the new ball. He could be a good differential under the lights. Bumrah picked up 2 wickets in the last game.

He will bat in the middle-order and is in fantastic form. Iyer scored 27 runs in the last game.

Hanuma Vihari has perfectly defined his position at 3 and scored a well deserved fifty in the last game.

He will be a key with both bat and ball. De Silva failed in the last game but can be a Trump card pick in this game.

He is the skipper of the team and will open the innings. Karunaratne was average in the last game and scored 55 runs in his 2 innings.

Mathews will bat in the middle-order. He is a very experienced player and scored 50 runs in his 2 innings.

He is their best spinner. Lasith Embuldeniya bowled decently in the last game and picked up 2 wickets.

He is another very talented spinner. Jayawickrama can play in this game and be a good differential pick.

Lakmal will be playing his last test game for his country and will look to bowl at his best in his final game. He bowled decently in the last game and picked up 2 wickets.

Agarwal can be a Trump card pick in this game. He is a solid player and can play big on his day.