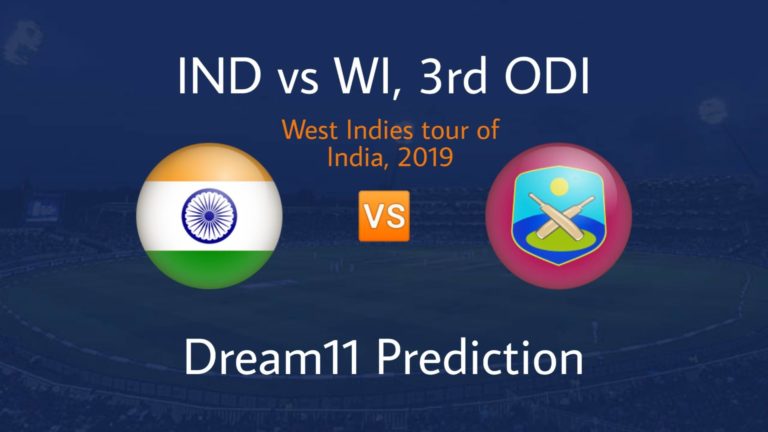 India will take on West Indies in the 3rd ODI match at Barabati Stadium in Cuttack. We will provide IND vs WI Dream11 Prediction, Match Preview, and Fantasy cricket tips.

The Indian team, after the disappointing performance in the 1st ODI, has made a comeback into the series with reliable performance in the last ODI. Both the openers KL Rahul and Rohit Sharma completed dominated the Windies bowlers by scoring 102 and 159 runs, respectively. Virat Kohli got out for a golden duck, but once again, Shreyas Iyer and Rishab Pant played exceptionally well and smashed the bowlers all over the park and scored 53 and 39 runs, respectively.

Indian Bowlers were also brilliant in that match. They gave away too many runs in the early part of innings but later picked up wickets and controlled the flow of runs. But again in the middle overs, they leaked too many runs and were in desperate need of wickets, then Shami provides the break-through by picking up 2 wickets in a row. Later Kuldeep Yadav picked up the 2nd hat trick of his career, and it looked like it was over for West Indies in the game, but tail-enders batted well and added 50 runs to the 9th wicket. Shami and Kuldeep Yadav picked up 3 wickets each, Jadeja picked up 2 wickets, and Shardul Thakur picked up one wicket, and thus India won the last ODI by 107 runs.

West Indies in the 2nd ODI, especially the bowlers, were extremely poor in the match. They struggled very much, and after 227 runs, they managed to pick up the first wicket. In the very next ball, they got Virat Kohli out for a golden duck and looked like they were back in the game, but again, their bowling and fielding woes continued, and India scored a massive total of 387 runs.

With such colossal total to chase, West Indies started their inning with positive intent and looked good. But they lost some wickets after the power play and looked like they would collapse, but Nicholas Pooran and Shai Hope played exceptionally well by scoring 75 and 78 runs respectively and looked like they would chase it. But Shami bowled exceptionally well and picked up the wicket of Nicholas Pooran, and later, Kuldeep Yadav picked up Shai Hope, and that was almost the end of the chase.

The 3rd ODI will be the decider, and it is going to be very interesting as both the teams look equally strong and deserving.

The pitch is considered to spin-friendly, but as the match progresses due to the due factor, it would be difficult to grip the ball.

Last ODI at this venue was played nearly three years ago, and it was a very high scoring game. In which batting first India scored 381 for 6 and England scored with 366 for 8.

Right arm pacer Deepak Chahar has been ruled out of the series due to knee injury, and Navdeep Saini has been named as his replacement.

India could either play the debutant Navdeep Saini or Yuzvendar Chahal.

Virat Kohli:
The world No.1 Batsmen in ODI Virat Kohli will bat one down and can destroy any bowling line-up if he is set and gets going. He was out for just 4 runs in the 1st ODI and reached out for a golden duck in the 2nd ODI. He would be very eager to come to bat and score some runs in the last ODI of this year.

Rohit Sharma:
He will open the innings for India and generally starts slow, but once he gets into the mood, then there is no stopping him, and he can hit the bowlers all around the park. He scored 36 runs in the 1st ODI and scored massive 159 runs and was Man of the Match in the 2nd ODI.

Lokesh Rahul:
He seemed to be in the right touch in the T20 series and can score quick runs for the team and can also hit big shots. He scored a brilliant 100 in the last ODI.

Shreyas Iyer:
He has proved himself almost every time he got a chance to bat for India, and he is an excellent hitter of the ball and can play crucial knocks when required for the team. He played a very sensible knock of 70 runs in the 1st match and played a quick inning and scored 53 runs off just 32 balls in the 2nd ODI.

Ravindra Jadeja:
The Left-arm orthodox bowler (Bowling All-rounder) can give Fantasy points bowling as well as batting. He took 2 wickets in the previous match.

Mohammed Shami:
He bowled well in the 2nd ODI and picked up 3 wickets for just 39 runs. He is an attacking bowler and is very good at picking up wickets.

Rishabh Pant:
This talented wicket-keeper batsman finally proved himself in the first match by playing an excellent knock of 70 runs and also scored 39 runs off just 16 balls in the 2nd ODI.

Kuldeep Yadav:
The Left-arm chinaman bowler picked 96 wickets in 53 ODI matches. He bowled exceptionally well in the 2nd ODI and picked up 2nd hattrick of his career. He picked up 3 wickets for 52 runs in his 10 overs in the last ODI.

Shai Hope:
Wicket-keeper batsman has an average of 52.02 runs in ODI matches. He is technically strong Batsman and has scored 102* runs in the first match and scored 78 runs in the last game. Shai Hope is good to pick in India vs West Indies 3rd ODI Dream11 Team.

Shimron Hetmyer:
He is a very talented batsman and can hit the ball to all parts of the ground. He has shown in the first match what he is capable of by scoring 139 runs from 104 balls, but he got out for just 4 runs in the 2nd ODI.

Roston Chase:
He can bowl as well as a bat for his team. He has the ability of a match-winner for his team. But he scored only 4 runs and gave away too many runs in the last match. Roston Chase’s recent form is not good.

Sheldon Cottrell:
He leads the pace attack for West Indies. He bowls well but has a slightly higher economy rate, but he can cause destruction by picking up the early wickets in the power play with his pace and bouncers and picked up 2 wickets in the first match and also in the second match.

Kieron Pollard:
He is the most experienced player in the team and also the captain of the team. Pollard can bat and hit some big shots, and also he can bowl too and pick up wickets. He picked up one wicket in the first match. He managed to pick up one wicket in the 2nd ODI also but was out for a golden duck.

Jason Holder:
He is the No.1 all-rounder in the world in test cricket. Though the format is different, Jason Holder can bowl well and pick up wickets, and he can bat down the order too and score some runs for his team. He managed to score only 11 runs in the previous match and didn’t take any wicket.

Keemo Paul:
He can bowl as well as a bat for his team. But he is better at bowling and picking up wickets and picked up 2 wickets in the first match and picked up 1 wicket in the second match. He also scored 42 runs in the 2nd ODI.

Nicholas Pooran:
He is a destructive batsman, and he hits massive shots and can play big knocks too. Once he gets comfortable on the crease, it is challenging to get him out. He came at the end in the first match and played a sensible knock of 29* runs and scored 75 runs of just 47 runs and looked very dangerous on the crease.

If you liked, WI vs IND 3rd ODI Dream11 Prediction then follows us on Twitter for the Latest News and Playing XI. You can also find us on Facebook.