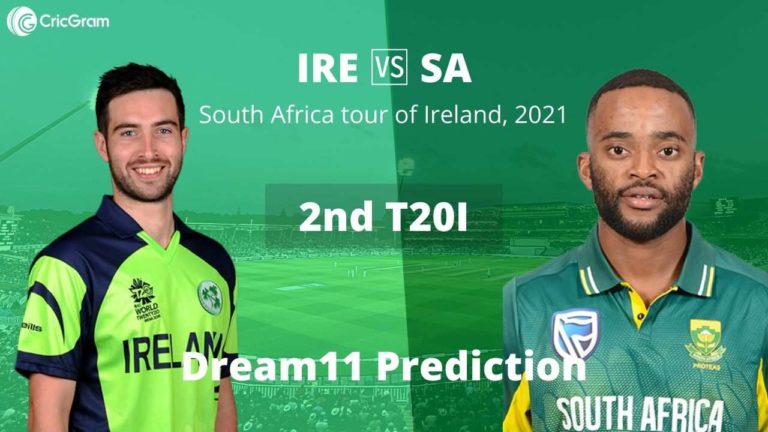 Ireland will take on South Africa in the 2nd T20I at The Civil Service Cricket Club, Belfast.

Ireland would be disappointed with their 1st T20I as they lost by a margin of 33 runs. The bowlers performed well, but the batsmen were not up to the mark. The experienced duo, Stirling and Kevin O’Brien, got out early. Skipper Balbirnie and Harry Tector batted well and tried their best to fight back. In the end, Barry also scored some runs, but it was too late.

The bowling unit did an excellent job by picking up wickets at regular intervals and restricting runs’ flow. Mark Adair picked up three wickets.  Joshua Little and Simi Singh managed to pick up two wickets each. The batsmen need to show some patience and not throw away their wickets to win the match.

South Africa has started the series on a good note as they won the 1st T20I comfortably by 33 runs. Quinton de Kock gave an explosive start but got out early. Skipper Bavuma and Malan fell early without scoring much. Aiden Markram and Rassie van der Dussen batted well and rebuilt the innings. Miller and Rabada scored some crucial runs and helped the team to reach a good total.

The bowlers were in good rhythm as they picked up wickets right from the first over. Tabraiz Shamsi was brilliant and picked up four wickets. Linde and Ngidi picked up two wickets each, and Rabada picked up one wicket. South Africa may want to white-wash Ireland this series.

The average scores may appear to be significantly less, but the pitch is neutral and we can expect 160-170 runs from the batting first. Teams chasing have won most of the matches here.

(The team chasing has won 13 out of the 21 matches played at this venue.)

The weather will be partly, but there is no chance of rain during the match.

He is an experienced player and opens the innings for the team. Stirling scored only six runs and went wicketless in the last match.

He is a batting allrounder but picked up two wickets in the last match and scored only four runs in the previous game.

Balbirnie is the captain of the team. He scored 22 runs from 16 balls in the last match and is a good pick for C and VC in the IRE vs SA Dream11 team.

He is a right-arm fast bowler and has picked up wickets consistently in this tour. Adair bowled brilliantly, picking up three wickets in the last match.

Joshua bowls left-arm fast and are improving himself in the T20Is. He picked up two wickets for 27 runs in his four overs.

Dockrell bowls left-arm orthodox and can also bat brilliantly. He scored only two runs and went wicketless in the last match.

Tector is a right-handed batsman and scores runs consistently. He scored 36 runs from 34 balls in the last match.

He bowls right-arm medium-fast. Barry scored 30 runs but was expensive and went wicketless in the last match.

He bowls at a decent pace. Craig did not play the last match.

Kevin is an experienced all-rounder but has not been bowling much recently. He was out for a duck in the last match.

J Malan didn’t performed well in the last game but he is must have pick in IRE vs SA Dream11 Team.

Markram generally opens the innings but batted in the middle-order in the last match and scored 39 runs.

Shamsi is the No.1 T20I bowler and bowled exceptionally well, picking up four wickets in the last match.

He scores run consistently, irrespective of the format. Rassie scored 25 runs in the last match.

Skipper Bavuma has been out of form in the recent matches and scored only 13 runs in the previous game.

He is one of the top bowlers worldwide but doesn’t have an excellent record in T20Is. Rabada managed to pick up a wicket in the last match and scored 19* runs. K Rabada is also a very good Captain choice in Ireland vs South Africa 2nd ODI Dream11 Team.

Ngidi has been performing brilliantly in the T20I format and picked up two wickets for just 18 runs in his four overs.

Linde is an all-rounder who scored ten runs and picked up two wickets in the last match.

He is a left-handed batsman and plays the role of finisher. Miller scored 28 runs in the last match.

He bats in the middle-order and is a good striker of the ball, and did not play the last match.

Nortje bowls at a good pace and troubles the batsmen but did not play the last match.