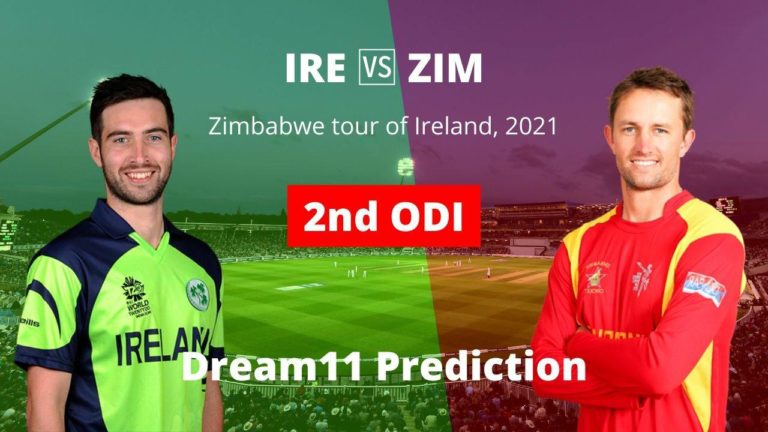 Ireland and Zimbabwe will play in the 2nd ODI at the Civil Service Cricket Club, Belfast.

After winning the T20I series, Ireland faced disappointment in the first match as they lost by 38 runs.

William Porterfield scored a brilliant fifty, and Paul Stirling also batted well, scoring some runs. At No.3, skipper Balbirnie got out early. Harry Tector scored a fifty in the middle-order, but the remaining batsmen got out without scoring much.

All the bowlers who bowled in the first match managed to pick up a wicket each. Simi Singh and Andy McBrine bowled well, controlling the flow of runs. The middle-order batting needs to be improved if they want to win the series.

Zimbabwe has started the series on a good note by winning the first match comfortably by 38 runs. It was an equal effort from both the batsmen and bowlers.

Brendan Taylor, as an opener, batted well but was unlucky to miss the fifty by one run, but his partner Chakabva got out early. At No.3, skipper Ervine scored a brilliant half-century. In the middle-order, Sean Williams scored some crucial runs, and Sikandar Raza scored a quick fifty and provided an excellent finish to the team.

The bowling department also made a brilliant contribution by picking up wickets and controlled the flow of runs. Blessing Muzarabani picked up four wickets in the last match. Wellington Masakadza and Sean Williams managed to pick up two wickets each.

Zimbabwe needs to continue the momentum, and they can easily win the series.

The Weather forecast shows that it will be mostly cloudy with some chance of rain during the match.

(The average score is based on one match played in this series.)

The pitch at Belfast is a balanced one and does not change much throughout the game. The batsmen enjoy batting here, and at the same time, bowlers can also get some movement from the pitch.

(The team batting first has won one out of the one game played in this series.)

Stirling opens the innings and can bowl a few overs. He scored 32 runs but did not get the chance to bowl in the last match.

Balbirnie is the skipper of the team and bats at No.3. He scored only 12 runs in the last match.

He is a right-arm off-break bowler and can also bat very well. Simi Singh scored only three runs but bowled brilliantly by picking up a wicket and two maiden overs.

Adair is a right-arm fast bowler and can also score some runs down the order. He managed to pick up a wicket in the last match.

He is a left-handed batsman and opens the innings along with Stirling. He batted well, scoring 75 runs in the last match.

He is a batting all-rounder and generally bats in the middle order. Williams scored 33 runs and managed to pick up two wickets in the last match.

He is an experienced right-handed batsman and opens the innings for the team. Taylor scored 49 runs in the last match.

Ervine is the skipper of the team and will bat at No.3. He played a captain’s inning in the last match, scoring 64 runs.

Raza is an all-rounder who can perform equally well with both bat and ball. He scored 59* runs from 44 balls but went wicketless in the last match.

He batted in the lower middle-order in the last match and also bowled a few overs. Madhevere can play a big inning and can pick up some crucial wickets. So he can be a good pick in your IRE vs ZIM Dream11 team.