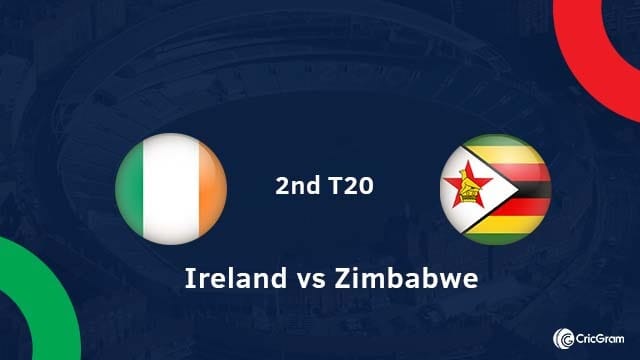 After a wash-out in the first T20I, Ireland and Zimbabwe will meet at Bready Cricket Club in the second encounter of three-match T20I series. We will provide IRE vs ZIM Dream11 Team Prediction, Preview and Probable Playing XI for the match.

Team Ireland has dominated Zimbabwe and clean sweep the ODI series. They have performed well in recent times and will give a tough challenge to Zimbabwe. They have a solid batting order led by Paul Stirling and Andrew Balbirnie along with quality all-rounders in the form of Kevin O’Brien, Mark Adair, and Shane Getkake. Their bowling department also has enough firepower and the onus will be on Boyd Rankin and George Dockrell to restrict Zimbabwe. They will be eager to continue the momentum and defeat Zimbabwe in the second T20I.

On the other hand, Zimbabwe has failed to perform recently and have lost series to Netherlands and Ireland. They have quite a strong squad but have not been able to perform in unison. Skipper Masakadza along with Solomon Mire will expect to give a good start to the team and then hope for good performances from experienced Craig Ervine, Brendan Taylor, Williams, and Raza. Their pace department led by Kyle Jarvis, Mpofu and Chatara are also not at their lethal best but will be determined to put their best show in T20I series.

Pitch will be neutral supporting batsmen and pacers. In the first ODI played here, 254 was successfully chased by Ireland. Pacers took 12 of the 13 wickets.

Tim Murtagh, James McCollum, and Andy McBrine are not a part of T20I squad.

Kevin O’Brien and Paul Stirling will open the innings. Andrew Balbirnie, Lorcan Tucker and Gary Wilson will follow them.

Boyd Rankin will spearhead the pace attack along with Shane Getkate and Mark Adair. Anyone among Joshua Little or C Young will support them. George Dockrell and Greg Thompson will handle the spin department along with Stirling.

They have declared unchanged squad for T20I series.

Sean Williams, Sikandar Raza and Ryan Burl will play the role of an allrounder. Solomon Mire can also bowl a few overs of medium pace.

Kyle Jarvis and C Mpofu will lead the pace attack along with anyone of Tiripano/Chatara. Sean Williams, S Raza and Ryan Burl will handle the spin attack.

The team can give a chance to Elton Chigumbura or Richmond Mutumbami in place of Peter Moor.

The team can open with Brendan Taylor and demote Solomon Mire in the batting order.

Brendan Taylor is the most experienced batsmen from Zimbabwe but failed miserably in the ODI series. He will be eager to score big tomorrow. He scored 40 runs in his last T20I against the Netherlands.

Lorcan Tucker is a young and talented Irish batsman. He made handy contributions with the bat in ODI series.

Skipper Gary Wilson is a talented and experienced player. He has performed well in limited chances. He comes down in the batting order.

Paul Stirling is an attacking opening batsman and has scored plenty of runs for Ireland and in county cricket. He scored 141 runs in three ODI’s and can also spin the ball if needed.

Andrew Balbirnie has performed brilliantly in the last two years and is an attacking batsman. He generally plays big knock if set and will be eager to score big tomorrow. He is a must pick in ZIM vs IRE Dream11 team.

Craig Ervine is a technically strong batsman and has performed well in the last two series. He scored 156 runs in three-match ODI series.

Kevin O’Brien is an attacking batsman and can play big shots. He will open for Ireland and will be a must-pick in batting category. He does not bowl much in recent times.

Skipper Hamilton Masakadza has lost his form and failed to perform from last one year. He is in very poor form.

Solomon Mire is a very attacking batsman and can also bowl a few overs of medium pace. His recent form is also poor.

Sean Williams is the best allrounder among all associate teams and performs brilliantly with the bat as well as the ball. He scored 153 runs and took three scalps in ODI series.

Sikandar Raza is a talented allrounder and is more effective in the T20I format. He can play attacking cameos with bat and will bowl four overs of spin.

Mark Adair is an exciting Irish allrounder and has performed brilliantly for his team. He took six scalps in three ODI’s. He will both in death overs.

Ryan Burl is a talented allrounder but doesn’t get enough chances with the bat as well as the bowl.

Boyd Rankin is a lethal pacer and will spearhead Irish pace attack. He took three scalps in ODI series and is a must pick in IRE vs ZIM Dream11 team.

George Dockrell is a talented allrounder and will hope to make a strong comeback after a dip in form. He can be handy with the bat also.

Pacer Kyle Jarvis has not performed as per expectations in recent times. He will be the key pacer for Zimbabwe and took three scalps in ODI Series.

Chris Mpofu is generally preferred inT20I format and can be a good pick tomorrow.

If you liked Ireland vs Zimbabwe Dream11 Prediction, Then follow us on Telegram for Dream11 Team and Fantasy Cricket Tips. You can also find us on Twitter.