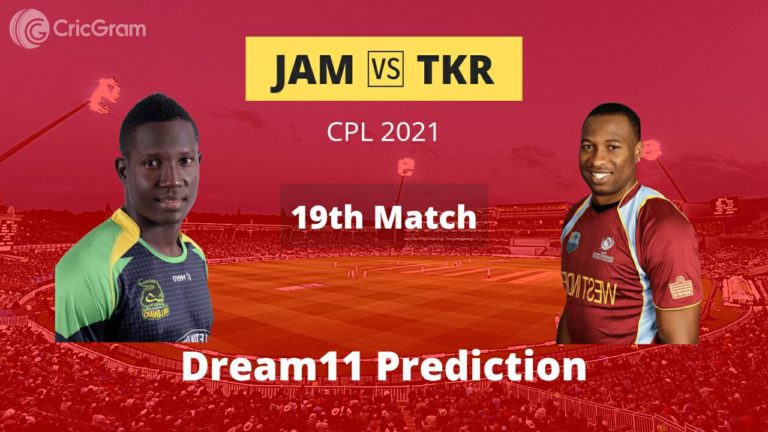 Jamaica Tallawahs and Trinbago Knight Riders will play against each other at Warner Park, Basseterre, St Kitts.

Tallawahs are having a tough time as they have won only two out of the five matches and are currently at 5th position on the points table with four points. They had to face disappointment in the last game as they lost by seven wickets.

The batting unit has performed poorly so far this season. Only Kennar Lewis batted consistently, but he, too, got out for a duck in the last match. Haider Ali and Rovman Powell have struggled to score runs. Craig Braithwaite and Andre Russell have added some crucial runs down the order. Imad Wasim played his first match of the season and batted brilliantly.

The bowlers have performed better compared to the batsmen. Migael Pretorius is the team’s consistent wicket-taker, and Imad Wasim managed to pick up two wickets in the last match. Tallawahs need to improve their batting performance else they would be out of the race for playoffs.

Knight Riders have performed decently so far as they have won two out of the four matches and are currently at the 3rd position of the points table with six points. They performed well in the last game and won comfortably by seven wickets.

Lendl Simmons’s opener is finally back to form as he scored a fifty in the last match, but Sunil Narine has failed to provide an excellent start to the team. At No.3, Munro has been scoring runs but has been slow in his approach. Kieron Pollard and Tim Seifert have handled the middle-order very well.

The bowlers have been the match winners for the team. Ravi Rampaul is picking up wickets consistently and is the leading wicket-taker of the season. Isuru Udana, Akeal Hosein, and Sunil Narine have also picked up some crucial wickets. TKR needs to work a bit on their batting unit so that they can score runs quickly.

The Weather will be partly cloudy, and there is a slight chance of rain during the match.

The pitch has appeared to be slowing down as the teams in the last two matches struggled to score runs. The teams chasing are having an advantage from the previous matches. A total of around 160 can be defendable on this pitch.

He is a power hitter and can also bowl a few overs of medium pace. Russell scored 20 runs but went wicketless in the last match.

He is a right-handed batsman and opens the innings for the team. Lewis is the leading run-scorer of the team but was out for a duck in the last match.

Pretorius is a right-arm fast bowler and has performed brilliantly this season. He managed to pick up a wicket in the last match.

He is an all-rounder and performs well with both bat and ball. Imad scored 42 runs and managed to pick up two wickets in his first match of the season.

Braithwaite is a bowling all-rounder but has been contributing well with the bat this season. He scored 58 runs in the last match.

Narine opens the innings and picks up wickets consistently. He scored nine runs and managed to pick up a wicket in the last match.

He is an experienced bowler and has been in sublime form. Rampaul picked up two wickets in the last match.

Simmons opens the innings for the team and has struggled to score runs. But in the last match, he scored 70 runs from 45 balls.

Akeal is a left-arm orthodox bowler. He bowled brilliantly in the last match, picking up two wickets for just 12 runs and a maiden over.

He is the captain of the team and has batted well so far this season. Pollard scored seven runs but went wicketless in the last match.

He has picked up a good amount of wickets but has also been expensive this season. Udana managed to pick up one wicket in the last match.