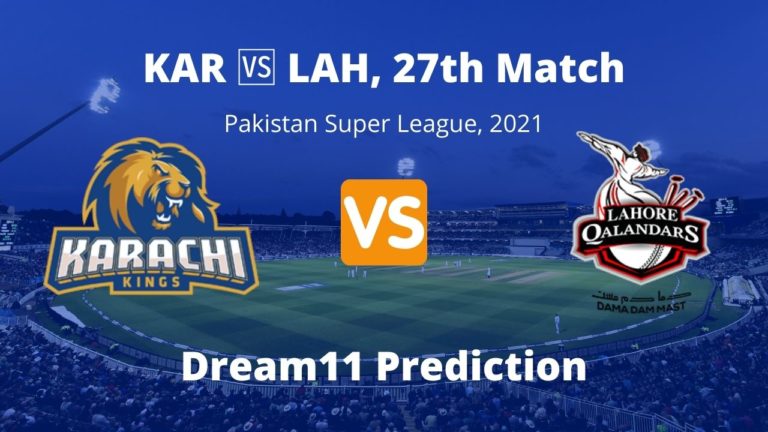 Karachi Kings and Lahore Qalandars will play in the 27th match of the Pakistan Super League 2021 at Sheikh Zayed Stadium, Abu Dhabi.

Karachi Kings are having a tough time towards the end of the season as they have won only three out of the eight matches and are currently at the 5th position on the points table. The batsmen performed terribly in the last game, and as a result, they lost the game by six wickets.

Sharjeel Khan gave a decent start in the last match but is yet to play a big inning in the previous game. After so many brilliant performances, Babar Azam got out for a duck in the last match. Martin Guptill has been in inferior form so far in this season.

After a brilliant fifty, Najibullah batted very slow in the last match, and Imad Wasim has struggled a lot this season. Chadwick Walton has been doing a decent job in middle-order but got out for a duck in the last match. Abbas Afridi scored some quick runs in the previous game and helped the team cross the 100 runs mark.

Karachi Kings need to win their remaining two matches to ensure a spot in the playoffs.

Qalandars, looking so strong, has lost two consecutive matches and is currently at the 3rd position on the points table with 10 points. They lost the last game by 18 runs.

Both openers Fakhar Zaman and Sohail Akthar, haven’t been able to give an excellent start to the Abu Dhabi leg. At No.3, Zeeshan Ashraf is yet to prove himself.

The two strong pillars in the middle-order, Mohammad Hafeez and Ben Dunk, have also looked out of form from the last few matches. However, Tim David has done the role of finisher perfectly so far. Rashid Khan and James Faulkner have also scored whenever they have got a chance.

The bowling department has been performing well compared to their batting unit, and James Faulkner has been their most consistent wicket-taker. Shaheen has also performed well but went wicketless in the last match. Hafeez and Rashid Khan managed to pick up one wicket each in the previous game.

Lahore Qalandars need to win at least one of the two matches to ensure a spot in the playoffs.

The pitch favors the bowlers more from the last few matches, but the batsman can also score a good amount of runs if they show some patience. Therefore, we can expect scores of around 170 in the remaining games.

(The team batting first has won six of the eleven games played at this venue so far in this season.)

Babar Azam is one of the best batsmen globally and is the second-highest run-scorer so far this season. However, he was out for a duck in the last match. Babar Azam is very good Captaincy choice in KAR vs LAH Dream11 Team.

He opens the innings along with Babar and has been batting slowly in the recent matches and scored 25 runs in the last game.

Guptill is entirely out of form and struggling to score runs in double digits.

He is a left-handed batsman. Zadran scored only 17 runs from 27 balls in the last match.

Waqas is a left-arm medium-fast bowler and went wicketless in the last match.

He has struggled a lot this season to pick up wickets. Amir was costly in the last match and has been wicketless over the previous three games.

He is a young right-arm fast bowler and scored 27* runs in the last match but was expensive and wicketless.

Thisara is a bowling all-rounder and did not play the last match.

Hafeez struggled to score runs and scored only one run in the last match but managed to pick up a wicket.

He has not been able to score much in Abu Dhabi. Fakhar scored only 12 runs in the last match. F Zaman is also good for C and Vc in Dream11 Team for today match.

Rashid Khan has struggled to pick up wickets in the last two matches and picked up a wicket and scored eight runs in the previous game but is a good pick for C and VC in your KAR vs LAH Dream 11 team.

He is in brilliant form this season. Faulkner picked up three wickets in the last match.

He is a young left-arm fast bowler but went wicketless in the last match.

Akhtar is in terrible form this season and was out for a duck in the last match.

He is a right-arm fast bowler and bowls over 140 Kmph. Unfortunately, Rauf was expensive and went wicketless in the last match.

Ben Dunk is a good wicketkeeper-batsman but got out for just six runs in the last match.

Daniyal is a right-arm fast bowler and went wicketless in the last match.

David is a right-handed batsman and is perfect for the role of finisher. He batted brilliantly, scoring 46 runs in the last match.

This is looking risky match on Dream11, try to play only Grand Leagues.