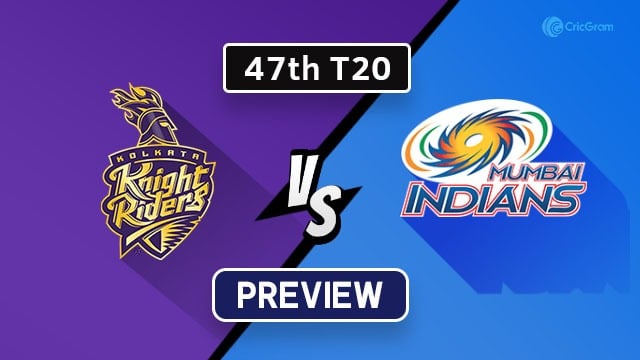 The 47th Match of Indian Premier League 2019 will be played between Kolkata Knight Riders and Mumbai Indians. We are covering KKR vs MI Dream11 Team Prediction, Preview and Probable Playing XI for the T20 match. The match is to be played at Eden Gardens in Kolkata.

Kolkata Knight Riders are seventh on the points table with four wins and seven losses with six losses coming in last six encounters. In the last match, They were defeated by Rajasthan Royals by 3 wickets. Batting first, KKR were able to score 175 runs with help of classic knock of 97* runs from Dinesh Karthik. Defending the target, Spin duo of Narine and Chawla spun their web to take two and three wickets respectively but could not end the losing streak of the team. KKR will come all guns blazing to find their lost momentum and win remaining three encounters to stay alive in the race for playoffs.

Mumbai Indians are second on the points table with seven wins and four losses. They won their last match against Chennai by 46 runs. Batting first, Skipper Rohit Sharma scored crucial knock of 67 runs to give a target of 156. Evin Lewis and Hardik also played handy cameos. Defending the target, Lasith Malinga took brilliant four wicket-haul while Krunal and Bumrah took two scalps each to ensure another victory for Mumbai. MI will be determined to continue their good form and end KKR chances of qualification.

Good total can be expected with equal support to batsmen, spinners and pacers. Dew can create a problem for bowlers in second innings.

Place of Carlos Brathwaite is also risky and Matthew Kelly/Ferguson or Gurney can replace him.

The team can also bring back Uthappa in place of Shubman Gill or Rinku Singh.

Andre Russell and Sunil Narine will play the role of an all-rounder. Carlos Brathwaite if plays can support them.

Piyush Chawla and Sunil Narine will be the lead the spin attack. Nitish Rana can support them.

Andre Russell will lead the pace attack along with Prasidh Krishna and Brathwaite/Kelly.

Beuran Hendricks has replaced Alzarri Joseph in the squad and is available for selection but will have to wait for his opportunity.

Mumbai may add another pacer on the pitch of Eden Gardens and can add Jason Behrendorff in place of Anukul Roy. In such case, Evin Lewis will have to sacrifice his overseas spot for Ishan Kishan or Yuvraj Singh.

Hardik and Krunal Pandya will play the role of allrounders.

Jasprit Bumrah and Malinga will be the key pacers along with Hardik Pandya while K Pandya and R Chahar will handle the spin department.

Andre Russell can be promoted for big hitting.

Hardik Pandya can be promoted for big hitting.

If you liked KKR vs MI Dream11 prediction, then follow us on Twitter for Latest Cricket News and Grand League teams.